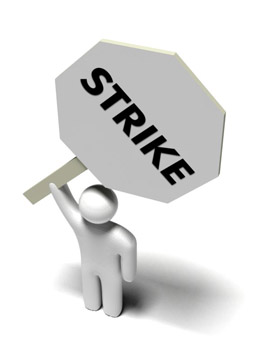 update IBM has filed an appeal and stay of determination with Fair Work Australia over the industrial relations tribunal’s judgement that the technology giant negotiate with the Australian Services Union in good faith over the rights of IBM workers it represents.

The union and IBM are at loggerheads over the rights of workers at Big Blue’s Baulkham Hills facility — which has around 80 staff.

Big Blue fought a running battle with the union and the employees it represents at the facility throughout 2008, with an eventual reconciliation being met for better conditions for the staff in October of that year.

However union action at the facility kicked off again in December. The union claims IBM plans to offshore jobs from the facility, as well as a number of others such as Cumberland Forest, and a centre in Clayton in Melbourne.

In the notice of appeal sighted by Delimiter this afternoon, IBM alleged Fair Work Australia Senior Deputy President Drake had made a number of errors in her ruling.

“Drake erred in concluding that batch operators and/or infrastructure operators employed by the appellant at its National Operations Centre at Baulkham Hills in NSW are eligible to be members of the Australian Municipal Administrative Clerical and Services Union (ASU),” wrote IBM.

IBM also alleged that Drake had made an error in concluding that the ASU was capable of being a bargaining representative in respect of the batch and infrastructure operators, and that the ASU’s application for a majority support determination was was competent to invoke the tribunal’s jurisdiction.

It appears that Drake has not yet filed her reasons for making her determination — as IBM wrote that “other grounds” may become apparent when the official issued the reason for her decision.

IBM also claimed there was public interest in permitting the appeal, as the tribunal did not have jurisdiction, and the matter had not been considered by either a full bench of Fair Work Australia or the Australian Industrial Relations Commission.

IBM was represented in the document by Karl Blake, a partner at law firm Maddocks.

In a statement issued this afternoon, IBM confirmed the appeal and said it would continue to work directly with its employees to ensure their individual interests were central throughout what it called “the redeployment process”.

“In addition to redeployment opportunities, IBM provides comprehensive support services including fully funded career transition programs for affected employees. We will continue to brief the ASU on any decisions that are made,” Big Blue said.

ASU branch secretary Sally McManus claimed in an emailed statement that IBM was throwing its weight around.

“As sure as night follows day, IBM is using the almost unlimited resources it has available to it as one of the largest and richest multinationals in the world to try and stop a group of its employees exercising their rights to collectively bargain under Australian law. IBM have not even seen the reasons for the decision – but they are still appealing it!” she said, noting the ASU would fight the stay and appeal.

“IBM have already informed the ASU that they intend to announce that at least 20% of these workers will lose their jobs as they scramble to put in place their offshore centre in China,” she added.