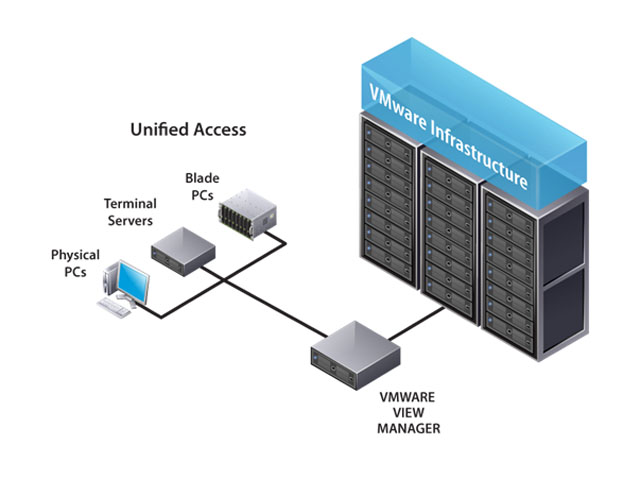 The City of Cockburn appears to be the first Australian Government organisation to undertake a roll-out of virtualised desktops across a whole organisation. It recently replaced 200 desktop PCs with 200 VMware View 4.0 desktops and end client machines spanning across 15 different sites across the City of Cockburn — libraries, community centres and offices.

Last week Delimiter spoke to the men behind the roll out — City of Cockburn’s Jeff Jones, manager of information services, and Justin Rowling, information technology coordinator. There were several reasons on Jones’ and Rowling’s list that made them take the path of a major IT system overhaul.

“For the last 3 years our satisfaction survey between IT and the rest of the out-stations have been pretty poor,” says Jones. “So we were trying to look at something that would enable us to manage these people as if they were in this building and get the same type of support.”

He added that having a virtual desktop meant that the support teams didn’t have to go on-site to provide support tasks. “One of the other keys in actually pursuing it was the PC over IP technology actually enabled us to provide a desktop experience equivalent to a PC,” says Rowling.

The City of Cockburn’s IT crowd had originally had another option in mind last year as the team was looking at the easy way option of just installing more PCs across the city — virtualisation wasn’t at the forefront of their thinking.

It wasn’t until Rowling attended VMWare’s Virtualisation Forum in October last year that he knew for sure what the solution would be.

“Something must have happened at the VMWare conference that Justin went to that gave him the confidence with it,” says Jones. “We weren’t 100 percent that we were going to go down that path and he went to the conference in Sydney and came back with a bit of belief.”

“We had to return the 200 PC’s in March. What we were going to do when we first started talking to Dell was just buy another 200 Dell PC’s and that was our decision before Justin went to the conference. “When he came back he sort of convinced me that we should give it a go. We were just going to have a rollout of PC’s that connected back to the server room environment.”

The team did research and considered other commercial solutions like Citrix’s Virtual Desktop products, ending up deciding that it didn’t have confidence in the product that it would be able to deliver the same performance as VMWare. What about open source solutions? Well, they were considered too, but the manpower required was deemed to be involved.

“Open source is great, except the expense involved with it is always the labour internally. So we didn’t really entertain the idea of going down an open source path,” Rowling says.

So how did the virtual desktop fair when it came down to the piggy bank? It did go over the line a little but the monetary benefits would see the system pay itself off.

“We paid about 10 percent more budget wise than we would’ve had to do with a rollout of PCs,” says Jones. “That was up upfront and not a total cost of life, so if we can keep these PCs for 5 years then there is a 25 percent saving there.”

Rowling had a team of three working with him during the project and, as part of its contract, a VMWare technical account manager had helped and offered expertise. Going forward, maintenance and technical support on the 200 virtual desktops and the servers will be carried out by Rowling and his team of three along with a VMWare specialist to provide direction and assistance when required.

Planning of the overhaul started in November just after Rowling attended the conference and rollouts began in February this year. “We don’t like to dawdle,” says Rowling. “It was more of a case of time constraint — we were limited around when the outgoing PCs had to be returned to the releasing company.”

“We had 2 options: Do it in 3 months or plan it in 27 months. We took the risk and there are a few failures in there and a few learnings, but it has been positive,” Jones added.

Some hiccups were encountered along the way — ranging from employee irritation to storage horrors, and communication issues. However, it wasn’t a schlock horror story — the issues did not cripple the project and a lot of lessons were learned from the potential monsters that threatened to ribbon their plans.

“We needed to evaluate our storage requirements probably prior to embarking the project,” explains Rowling. “So actually, we completely overlooked what implications the virtual desktop environment was going to have on our storage that we are running our virtual machines on. We also needed to consult with our end users more to find out all the little applications they had been running because they had free reign on their PCs.”

“It was kind of a double-edged sword — we achieved something that gave us far greater control but at the same time we probably had to communicate more beforehand that we were going to take that control. We ended up with some upset end users basically because they could no longer run their not-necessarily-legitimate software that they had been running.”

“From my perspective as the manager of the department I think it has been successful,” says Jones. “We can see that we are delivering the same experience that they were experiencing from a PC that they had previously. So from my perspective they are no worse off than they were before, but there are so many advantages of having a virtual desktop environment — I don’t think the end users yet realise the benefits.”

The team had found that a communications infrastructure had to be built at one of the sites of the project in order to meet demands.

“We also had problems with some of our communication links back to the building and the offices,” says Jones, “so we had to put in infrastructure in place and you can’t get infrastructure done overnight. So you know, if you want to get a new Telstra connection you have to wait up to 10 weeks or something like that, so people did suffer at the desktop while that infrastructure was put in place.”

The communication infrastructure installation had caused that one segment of the rollout to be held back until next month.

“One of the sites are still going and they won’t get done until the 5th of July. So they are struggling through with lots of speed issues but they have been very good,” Jones says, giving praise to the people who were put out by the delay — which amounted to 15 percent or 30 of the 200 desktops affected.

There hadn’t been any concerns or queries raised by the office workers in regards to security. Jones and Rowling reported that employees did not fret that their data, secured or otherwise would be saved offsite. “Users aren’t really aware of what they saved is saved locally … I don’t think what we have changed has changed their thought process on the privacy issue,” says Jones. “Most people don’t think about privacy from that perspective unless it’s private information — which is secured by passwords and logons in our system.”

There have been many positive outcomes from the project — some of which are yet to be fully realised by the end users. “It’s certainly much easier to manage 200 virtual desktops that it is to manage 200 PC computers. From the desktop support point of view and the inventory management, and all that sort of thing, it’s just much easier with this solution in place,” Jones explains.

“Ease of management, looking at being able to rapidly update hundreds of desktops from a central location,” adds Rowling. And the staff can get to their exact desktops from home.

“From a hardware point of view because you no longer got a smart PC on the desktop you looking at thin clients a that have a greater life span,” he added. “You can increase the working life of your hardware, which can reduce your cost. We have also been able to reduce our power consumption by having less devices on the desktop, so there’s been a green benefit there as well.”

It has also been easier to provider users with basic support — there is less that breaks on the desktop.

“Support is less technical these days and it’s just based around educating the user in their applications,” says Jones, “they actually get better productivity, I think they are actually becoming much more proactive, so I see great benefit in that.”

The contract with VMWare is for 3 years, but looking forward another few years the pair are unsure of what is in store for them — it’s difficult to predict what path technology will take. “If you had asked me two years ago I didn’t know any thing about VMWare desktops,” says Jones. “The thing is, technology changes.”

Jones concluded by talking about the pressure of the time frame they had to work to, the trouble of implementing a new product in that time frame and what that meant for the parties involved. “At the time VMWare 4 was very new and PC over IP was very new,” he says. “And I actually think that VMWare didn’t have a total handle on all the issues we could have faced as well. I think it has been a learning curve for both parties ”

“We could have waited 2 years and done it much well planned and probably be more successful but we would’ve lost the 2 years. We took a risk and I’m happy with risk. It’s been positive for us. Not every thing has gone a hundred percent smoothly, but overall its been positive move and I think we will reap the benefits in the upcoming 18 months.”