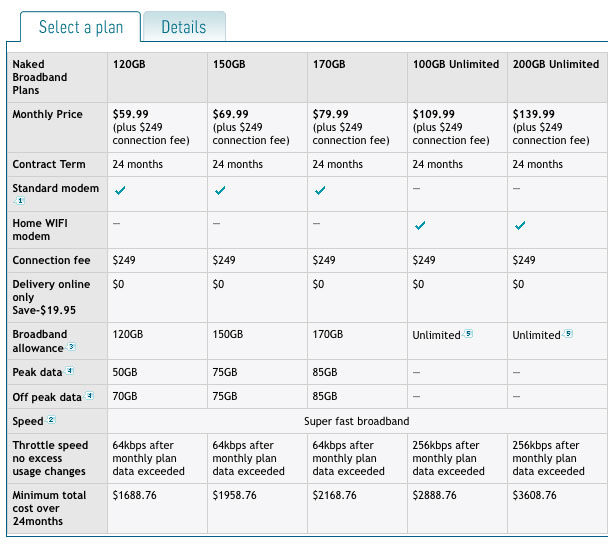 The nation’s second-largest telco Optus has revamped its broadband plans, including new “Unlimited” download quotes and sizable allowances even on lower-end plans — for example, 120GB for $59.99 a month on a two-year contract.

“We have listened to feedback from our customers and developed a range of broadband plans that combine extra data with greater value and more freedom,” said Optus’ Consumer marketing director Austin R. Bryan in a statement this morning. News of the plans was first broken by iTnews in late March.

The telco will also offer two “Unlimited” plans, which do technically allow unlimited downloads, but will be shaped down to 256kbps speeds after 100GB or 200Gb of data is downloaded, for $109.99 or $139.99 per month respectively. All of the plans are on two-year contracts with a $249 connection fee, and the lower plans have separate on-peak and off-peak quotas.

The company is also offering incentives for customers to bundle its home phone, broadband and mobile services together.

“As customers download more music, TV shows and movies or access more user-generated content online, Optus is thinking bigger and giving customers the option to use the internet what they want as much as they’d like to, without having to worry about download limits or excess charges,” Bryan said.

The news comes as Australian ISPs are increasingly offering their customers so-called “Unlimited” broadband plans which do not have a set amount they can download.

For example, in mid-February AAPT launched what it described as “24/7 Unlimited Broadband”. The plan does not come with data caps or throttling, and includes home phone line rental and music downloads and streaming for $99.95 per month on a two year contract.

“This is a milestone day for Australia as AAPT’s benchmark decision will force our major competitors to do the same thing. All Australians will benefit from AAPT leading the way with unlimited broadband,” said AAPT chief executive Paul Broad at the time.