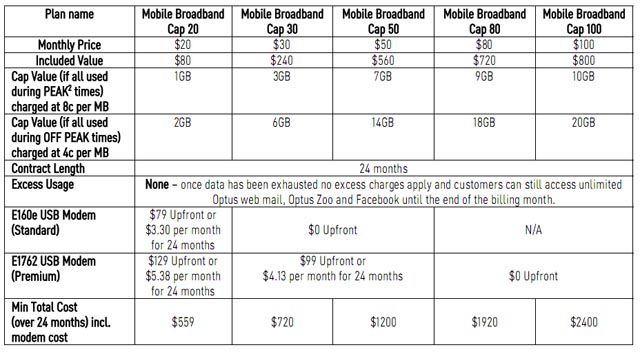 Once a customers’ quota has been used, they will not be able to further access the internet — other than certain free Optus sites and Facebook — until they buy a new data pack to tide them over until the next month.

“We’ve taken a new approach to our mobile broadband plan structure,” said Austin R. Bryan, the telco’s marketing director of its Consumer division in a statement. “For the first time, Optus mobile broadband customers will have access to cap plans that offer peak and off-peak data amounts, with double the data available for use in off-peak times.”

Optus has suffered complaints from customers in the past with respects to performance issues on its network. But Bryan said the network was continually being upgraded.

“We have continued to invest significantly in our network to support mobile broadband growth and improve customer experience,” he said. “The Optus 3G dual band mobile network now reaches more than 96 percent of the Australian population, with over 600 mobile sites constructed in the last financial year alone.”