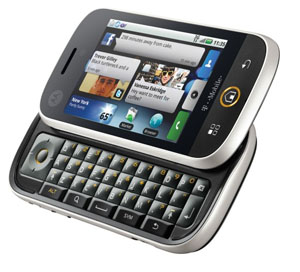 The handsets — the DEXT (pictured) and the BACKFLIP — have the ability to tie customers’ data from various social networks such as Facebook, MySpace, Twitter, Gmail, work and personal email through a Motorola software package dubbed MOTOBLUR.

Optus has released two new mobile plans as part of the launch. Dubbed ‘yes’ Social and ‘yes’ Business Complete plans, they provide unlimited access to MOTOBLUR, as well as sites such as Facebook, MySpace, Twitter and YouTube.

“With more people connecting, communicating and sharing content online, there has been an explosion in the popularity of social networking websites … this popularity has now been transferred to the mobile phone, with smarter devices making social networking more accessible,” said Michael Smith, the managing director of Optus’s Consumer division.

The news comes as carriers are increasingly launching Android-based smartphones into the Australian market to compete with rival offerings such as Apple’s iPhone. Telstra will in April start selling its first Android phone, in an exclusive three month deal to bring HTC’s newly launched Desire to its Next G network.