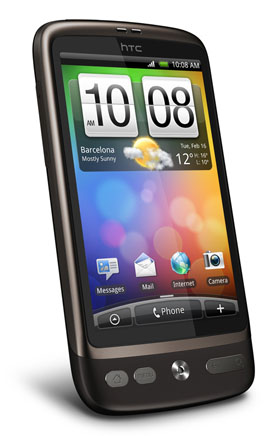 Telstra this morning revealed it would in April start selling its first smartphone based on Google’s Android platform, with an exclusive three-month deal to bring HTC’s newly launched Desire (pictured) to Australian shores on its Next G network.

HTC revealed the Desire overnight at the Mobile World Congress trade fair in Barcelona, Spain. The Desire has been hailed by commentators as similar in specifications to Google’s own branded phone, the Nexus One, which HTC manufactures for the search giant. Telstra said “pricing will be announced closer to launch”.

Telstra has not previously sold smartphones based on Android, although it has partnered with vendors on a number of other platforms, such as Apple on the iPhone, Research in Motion on the BlackBerry and Microsoft on Windows Mobile.

But a Telstra spokesperson said the momentum behind Android was now “clearly there”. “There is choice in handsets, maturity in the operating system and an ecosystem of around 20,000 apps, so all of these elements together mean it’s now compelling,” they said.

“This is only the beginning for Telstra and Android smartphones and we will be pushing these aggressively in the market … At the end of 2009 around 1.3 million Next G network mobile subscribers were using smartphones. That’s up significantly from this time last year and we think that we can double that by the end of this year.”

The smartphone runs version 2.1 of the Android operating system, integrated with HTC’s Sense user interface. It features a 1GHz Snapdragon processor under the hood, and a 3.7″, WVGA AMOLED display.

Telstra chief executive David Thodey said in a statement that he predicted Australians would adopt smartphones in record numbers this year thanks to the availability of 3G networks, the growing range and popularity of mobile applications, and the introduction of user-friendly Android devices like the Desire.

“We are delighted that our close relationship with HTC means that Australia’s most advanced Android smartphone will be available to Telstra customers first,” Thodey said. The CEO noted mobile FOXTEL would be available on the Desire, as would the Android applications market.