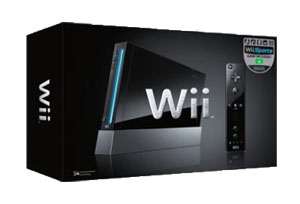 Video game giant Nintendo has unveiled plans to start selling a black-coloured Wii console in Australia from March 11, with its new, larger handheld DSi XL to launch locally from 15 April.

The Black Wii console will come packaged with Wii Sports and a black Wii Remote and black Nunchuk connector. From 25 February, Nintendo also plans to start selling new coloured Wii remotes in black, pink and blue, with stand-alone Nunchuks to also be available in black.

The black Wii will retail for $399.95, with the coloured remotes to go for $69.95 each. Nintendo revealed the details in several statements issued this afternoon, also noting it had sold 1.75 million Wii consoles in Australia over the past 167 weeks since the platform went on sale, according to GfK data.

The DSi XL has been available in Japan since November, but is only slowly making its way across the globe. Nintendo plans to start selling the device in stores locally from 15 April, alongside the current DSi console, which will continue to be sold.

The screens on the DSi XL are 4.2 inches, which Nintendo said made them 93 percent bigger than those on the DS Lite. The new handheld console also features a wider viewing angle, the ability to play with pre-installed software, longer battery life, improved sound, and a “new, larger, more comfortable stylus”.

A number of pieces of software and games come pre-installed on the DSi XL – from card games, to Dr Kawashima’s Brain Training (Arts Edition), to a notepad and clock application.

The DSi XL is compatible with all previous DS games and will come in two colours – burgundy and bronze. Nintendo did not say today how much it would retail for locally.

Finally, today Nintendo also announced that a new Wii game, Monster Hunter Tri (3) would be available in May 2010. The game has been available in Japan for some time.