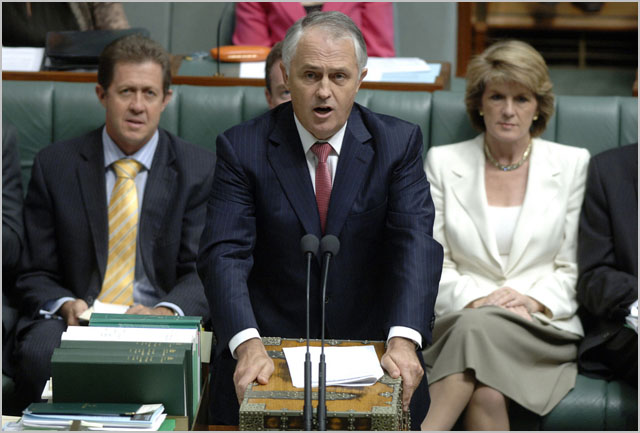 Note: This article was updated after publication with a statement by the Office of Communications Minister Malcolm Turnbull.

news Communications Minister Malcolm Turnbull has ordered all 550 staff at his Department of Communications to re-apply for their jobs, according to the Community and Public Sector Union (CPSU), as part of a sizable cull that could see up to 125 jobs cut from the department.

In a statement issued last week, the union said it had learned that all 550 staff at Communications would have to participate in a ‘spill and fill’ process as part of a major restructuring of the Department to cut 20-25 percent of its workforce.

CPSU National President Alistair Waters said: “This is a disruptive, costly and deeply divisive process. All it will do is pit colleague against colleague and throw the department into a tail spin. Waking up and finding out that your department is cutting jobs is bad enough but then to be told you will have to fight your workmates to hang on to job is worse.”

“We understand that the priorities of government departments change but this is not the way to treat hard-working professionals. We call upon the Department to immediately rethink this process. If jobs need to be cut, then the Department should first ask people to apply for redundancy rather than go down this divisive route.”

Waters said the staff do valuable work such as helping the switchover from analogue to digital, enabling people to access better broadband internet, and drafting rules and regulations to prevent media concentration. “This is not the way to treat your staff. It’s an unprecedented example of the appalling way that this Government deals with public sector workers. Cutting thousands of workers’ jobs is bad enough but to do it this way is just cruel and vindictive,” said Waters.

Since the Abbott Government came to office the CPSU said it had estimated that up to 4000 jobs – or more than one every hour – had been cut.

The news comes as a number of other major Australian employers have recently been cutting technology-related jobs over the past few months. Last week, for instance, embattled airline Qantas flagged plans to cut $200 million out of its technology budget over the next three years and undertake reviews of its major technology supplier contracts, as part of a company-wide cost-cutting initiative that will see a total of 5,000 staff leave the company and some $2 billion in total costs cut. IT jobs will specifically be cut under the initiative.

Similarly, Telstra’s advertising and directories business Sensis revealed plans several weeks ago to cut about 800 jobs Australia-wide, in a move that the CPSU said would “irreparably harm local economies and erode the nation’s skills base”. Telstra itself is also reported to be currently offshoring as many as 1,000 jobs to the Philippines and India.

However, new jobs are also being created. For example, in early February, global technology giant Hewlett Packard yesterday announced it would significantly expand its presence in Adelaide, creating about 430 high-end technology jobs over the next four years with the assistance of the University of South Australia and the South Australian State Government.

Update: A spokesman for Turnbull issued the following statement, following the publication of this article:

“The assertion that the Minister has ordered all staff to re-apply for their positions is clearly incorrect. As the Secretary indicated in his address to all staff last week, the Department has initiated consultation on a process that it considers, given the Department’s specific circumstances, to be a fair and equitable way of managing a redesign and reduction of this scale.

“The reduction in funding to the Department reflects the winding down of terminating programs from previous Budgets. Delimiter’s allegations that staff will be vetted for political affiliation is wrong and is a shocking slur against the professionalism of the public service.”

opinion/analysis
OK, there’s a couple of things going on here.

Firstly, it’s not usual for a major government department to spill all of its positions, as Communications has (at least according to the CPSU). What this signals is that the new Abbott administration is very serious about cutting a lot of weight out of the Federal public sector. This is an extreme move and will cause significant disruption at the Department.

The CPSU is right, in many ways, in its criticism of the move. A far more normal approach would be to conduct a more targeted cull. However, it seems clear that the new Coalition Government is determined to make broad cuts across the board and really put its stamp on Canberra’s public sector. It does have the mandate to do this, unfortunately for the department’s workers.

My personal opinion is that this move will also likely be used to marginalise any bureaucrats at the department who are seen as having links that are too close to the Labor Party. We’ve already seen NBN Co executive chairman Ziggy Switkowski take this action in October with the move to make former Labor State MP Mike Kaiser redundant, for example. We may also see those with links to the Liberal Party or Turnbull personally given important positions, as we’ve seen at NBN Co (Delimiter 2.0 link).

In general, as an advocate of small government, and although it’s a bad situation for those workers affected, I am personally in favour of broad cuts to the Department of Communications. When we have existing major government organisations such as the ACCC, the ACMA and most of all, NBN Co, all of which have at least a partial focus on telecommunications in Australia, one has to ask what work is actually being done at the Department that could not be done elsewhere.

I haven’t seen a huge amount of productive information released from the Department over the past several years. Perhaps that is indicative of something. I’d be interested to get feedback (perhaps through Delimiter’s anonymous tips form) about whether other people believe the Department of Communications is overweight for the tasks that it needs to perform.