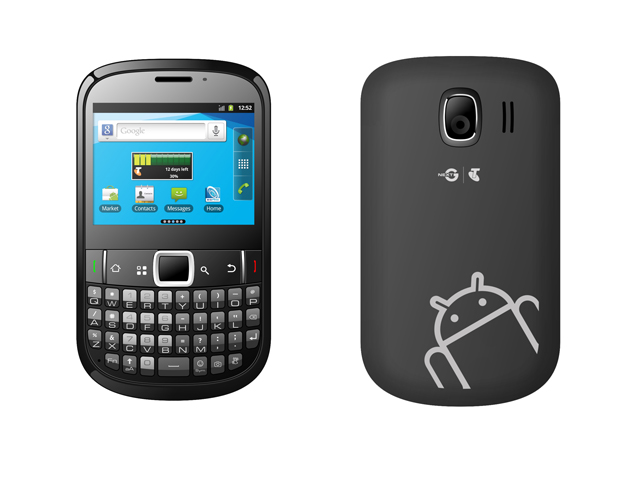 review Not everyone needs or can afford a smartphone that costs several hundreds of dollars. For the penny-pinching Delimiter readers, we thought we’d review something at the bargain end of the market for a change. The Telstra QWERTY Touch is one of the big T’s latest entry-level smartphones, running the Android 2.3.5 operating system and offering a not-so-common QWERTY keyboard + touchscreen form factor. Is it possible to get a decent user experience from a $129 prepaid smartphone? Read on to find out.

Design
Ever wanted a BlackBerry that runs Android? The QWERTY Touch looks uncannily similar to a BlackBerry Curve. The same rounded shape, the same 2.6” screen, the same indicator light above the screen that flashes whenever you’ve got a new notification . Even the hardware button arrangement between the keyboard and the screen borrows the BlackBerry style of having a five way navigation pad in the middle, menu and back buttons on either side. But that’s if you’ve got the black version – the QWERTY Touch is also available in bright pink, and it’s safe to say that no one will mistake it for a BlackBerry if you’ve got it in that colour.

For a cheap smartphone, the QWERTY Touch is remarkably well-made. The rear cover has a soft rubberised coating with an Android graphic peeking out of the bottom right corner, all of the buttons have good tactile feedback, and the keyboard is surprisingly nice to type on, with good-sized keys that are slightly raised and have a gritty texture to make them easy to feel for. Despite the QWERTY keyboard, it’s relatively narrow at 6.5cm, making it easy to use one-handed, and it’s pretty thin and light to boot, measuring 10.9mm thick and weighing only 126g. The headphone jack sits at the top of the device, with a micro-USB port on the right, volume buttons on the left, and a microSD card slot behind the battery cover, which you need to remove the battery to get to.

Features
There are no real surprises with the QWERTY Touch’s feature set. That is to say, it’s all pretty entry-level stuff. Telstra doesn’t specify what the QWERTY Touch’s processor is on its product page, but the Quadrant benchmark tells us that it’s a 600MHz ARMv6-compatible processor and uses Adreno 200 graphics. The landscape-oriented display measures 2.6” diagonally, and while the QVGA 320 x 240-pixel resolution is low by smartphone standards, it’s typical for this price range. The good thing about modern smartphones is that they’re all fairly standard when it comes to wireless features regardless of pricetag, and the QWERTY Touch benefits from the same 7.2Mbps HSDPA, 802.11n Wi-Fi, Bluetooth and GPS that more expensive smartphones offer. Internal storage is minimal at just under 100MB of available internal storage, although it comes with a 2GB microSD card and the memory card slot supports cards up to 32GB.

The QWERTY Touch runs Android 2.3.5, and certain native apps and dialogues have been tweaked to work with its landscape display. Aside from that, the version of Android on the QWERTY Touch is fairly vanilla, with just a few Telstra widgets on the homescreen and only the TelstraOne app pre-installed. There are shortcuts to other Telstra services on the homescreen like Navigator, CitySearch and FOXTEL, but these are just links to the webpages and can be removed. A few extra apps have been included to round out the stock Android apps, such as Facebook and Twitter, Documents To Go, and a few simple utilities.

Performance
Smartphones at this end of the market aren’t known for their cracking performance, but the QWERTY Touch doesn’t do too badly for what it’s worth. The capacitive screen is very responsive, and there isn’t much lag when it comes to launching apps or multitasking. The slower processor is evident when running the Rightware Browsermark benchmark and playing videos. For the former, it achieved a score of 13,544; by comparison, a typical dual-core Android smartphone scores an average of 55,000. We used RockPlayer Lite to play a standard definition episode of Community, and while it drops a few frames here and there, it’s smooth enough to be watchable. Audio from the rear-mounted speaker isn’t too bad either – it’s loud enough at maximum volume for personal listening, and produces a reasonably bassy, full-bodied sound.

Using the QWERTY Touch’s landscape-oriented display works well most of the time, but there are some third party apps that don’t support this orientation, so you have to tip the phone on its side to use them – a configuration that feels odd on the QWERTY Touch, given the placement of the hardware keyboard. As for the lower screen resolution, you can really notice the difference with the sharpness (or lack thereof) of text, icons and images. You’ll also have to do a lot more scrolling – when you open a new message in Gmail, for instance, you can’t even see the body of the message in the first screen.

We had no complaints with the QWERTY Touch’s performance as a phone. Naturally your mileage will vary depending on where you live, but in our testing in the Sydney CBD and eastern suburbs, our reception was consistently at full bars. The Speedtest.net benchmark reported respectable 3G download speeds of 1497kbps and upload speeds to 358kbps, with a 153ms ping time. Both the speakerphone and earpiece are clear, and loud enough to hear in noisy environments, and thanks to the decent speaker, ringtones are sufficiently loud as well.

The QWERTY Touch’s 1100mAh battery is a lot smaller than the ones found in smartphones we’ve reviewed recently, but then again, its power requirements are frugal due to the small, low-res screen and slower processor. With light usage consisting of two hours of on-screen time (Wi-Fi off), half an hour of calls, and a Gmail, Twitter and Facebook account syncing in the background, it lasted for 19 hours.

Conclusion
For a budget smartphone just a few notes north of the hundred dollar mark, the QWERTY Touch does very well for itself. It runs one of the latest versions of Android, has a serviceable QWERTY keyboard that those who send lots of messages will find appealing, and it’s build quality and call quality are excellent. If you do a lot of web browsing, however, the lower-res screen necessitates a lot of scrolling and zooming in, and you may want to consider spending a little extra for a smartphone with a 320 x 480 resolution.

Likewise, the poky processor will hold you back when it comes to web browsing desktop-formatted pages, gaming, playing videos, and running resource-intensive apps, so if the apps you use regularly a little more demanding than average, a last-gen phone with a single-core 1GHz processor would be more suitable. As it is, the QWERTY Touch’s main strengths are its QWERTY keyboard and bargain pricetag, and we can see it being a hit with first-time smartphone users, students, and bargain hunters.