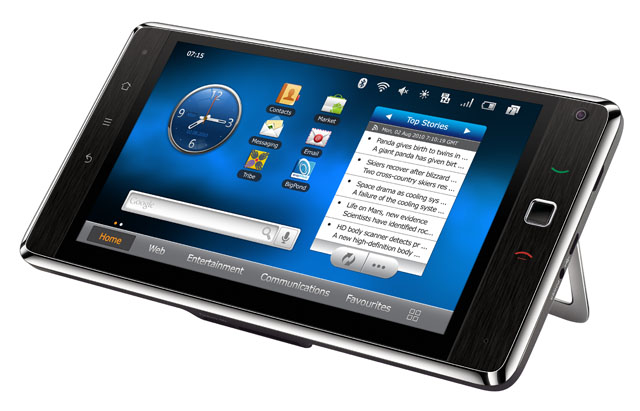 It’s no Apple iPad. But for the price Telstra will charge for it, it might not have to be. Yesterday Telstra detailed for the first time the complete specifications and pricing of its new T-Touch Tab Android tablet device, which it will start selling in Australia on November 2.

The device – manufactured by Chinese vendor Huawei – will retail for the up-front price of $299, which includes 3GB of pre-paid mobile data on Telstra’s Next G network to get customers started using its mobile capabilities.

Telstra will initially only sell the device on a pre-paid basis, but it expects to also start offering the device on 24 month contracts at $16 a month for the hardware cost, with discounts potentially pushing the device cost (not counting the monthly data plan) down to just $6 a month.

The T-Touch Tab has a 7”, WVGA touch-screen which runs at a resolution of 800×480 pixels. Unlike many of the latest generation of mobile phones which feature sensitive capacitive touchscreens, the Tab’s screen is what’s called a ‘resistive’ screen, which is known to work better with a stylus – included with the Tab – than a user’s finger.

The Tab is several hundred grams lighter than Apple’s iPad, weighing in at 500g, and is also smaller, with dimensions of 209x108x15.5mm. It features a 2 megapixel camera on its back that allows video recording, as well as another camera on its front.

The T-Touch Tab’s processor is a 768MHz Snapdragon CPU from Qualcomm, and it comes with 512MB of internal storage space, with a micro-SD card slot allowing expansion up to 16GB.

The device supports a wide variety of network connections. For example, it can connect to mobile networks in the 850, 1900 and 2100Mhz bands (Telstra’s Next G network runs at 850Mhz), as well as 802.11b, g and n Wi-Fi networks. It can theoretically handle download speeds of 7.2Mbps over a 3G mobile network, but Telstra says typical download speeds range from 550kbps to 3Mbps. The device has a GPS receiver built in for location tracking.

The T-Touch Tab will ship with version 2.1 of Google’s Android mobile operating system, but Telstra believes the device’s hardware is capable of running the updated 2.2, Froyo version which is slowly making its way onto high-end Android smartphones around Australia.

“We’re waiting to see a 2.2-upgraded ROM that we’ve put through testing,” the company’s director of mobility products Richard Fink said in a briefing yesterday at Telstra’s Sydney headquarters. The executive said it wasn’t clear yet what hardware requirements the next version of Android – code-named Gingerbread – would have.

Telstra will shortly release a host of new pre-paid plans designed to support the T-Touch, which are designed along the same lines as the carrier’s iPad plans. Customers can pay varying amounts ranging from $20 all the way up to $150 for data quotas from 250MB to 10GB. And customers will have different deadlines for using their data, ranging from just three weeks, all the way up to a year.

The telco expects customers to mainly use the T-Touch’s connection for internet data access, but the device is also capable of acting as a normal mobile telephone. Consequently, the tablet plans also come with a small amount of voice calling and SMS message quota.

The whole gamut of software available through Google’s Android application store can be downloaded and installed on the T-Touch Tab, but Telstra has also pre-installed a number of its own applications and themes on the device – for example, access to content from its joint pay TV venture Foxtel, as well as its Tribe social networking platform.

The T-Touch Tab will face stiff competition upon launch. A number of analysts have recently highlighted strong local sales of Apple’s iPad tablet, and Dell has recently launched its Streak tablet through Optus. The Dell device has a 5″ screen.

In addition, Samsung is slated to launch its Samsung Galaxy Tab in November, which also has a 7” screen. All of the other tablets have more powerful processors than the T-Touch Tab, as well as more sensitive touchscreens – however they will also retail for two to three times the cost of the T-Touch Tab. Telstra itself will sell the Galaxy Tab alongside its own offering.

However, at the briefing today, Telstra executive Fink emphasised the low price of the telco’s tablet when compared with the other products on the market, saying Telstra had no plans for a “premium-end tablet” at this stage. Fink compared Telstra’s tablet strategy – which will eventually see Telstra launch devices in other sizes – to its strategy for its self-branded smartphones, which are pitched at the low end of town.

“There’s an enormous opportunity at the entry level for the mobile tablet,” he said. “A lot of people like the opportunity of a big screen, but people don’t want to pay a premium level. I wouldn’t give my kids something that costs $800 to $900.”

Fink said Telstra sold its self-branded phones where it saw gaps in the market. And some of these most simple and cheap offerings are among its all-time top sellers because of that reason.

The executive acknowledged the older-style touchscreen of the T-Touch Tab took a bit of getting used to for those who were more used to the more sensitive touchscreens found on smartphones such as the iPhone, for example. However, he said it didn’t take long. “As soon as you spend 10 minutes with it, you get used to the pressure,” he said.

And the Telstra executive had some final words for Apple supremo Steve Jobs, who recently poured cold water on the incoming wave of 7” tablets, which will rival his company’s iPad. Jobs had stated the form factor was too small to work effectively with associated tablet software.

“I don’t disagree with his mathematical analysis, but I do think customers will end up choosing,” chuckled Fink, pointing out smartphones came with much smaller screens than 7”. “I think you’re going to have different people with different aspects,” he said.