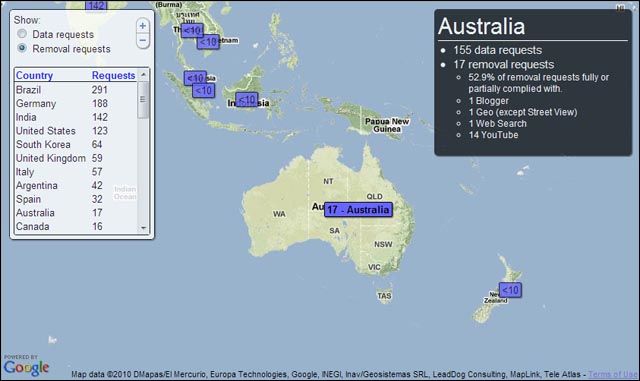 Google today published statistical information showing it had received 155 requests for information from Australian government agencies in the second half of 2009, and 17 requests to remove information from its various sites — only half of which it complied with.

The release of the local statistical information (Google has declined to provide specific information about the requests) comes as part of a global initiative where the search giant is attempting to illustrate how widespread government censorship of the web is growing rapidly.

“We already try to be as transparent as legally possible with respect to requests. Whenever we can, we notify users about requests that may affect them personally. If we remove content in search results, we display a message to users,” Google’s chief legal officer David Drummond wrote in a global blog about the project.

“The numbers we are sharing today take this transparency a step further and reflect the total number of requests we have received broken down by jurisdiction. We are also sharing the number of these content removal requests that we do not comply with, and while we cannot yet provide more detail about our compliance with user data requests in a useful way, we intend to do so in the future.”

In Australia, Google received 155 requests for data from government agencies over the period, and 17 removal requests, with one of those being relating to a blogger using its platform, one relating to geographical data (not including its Street View service, which provides street-level photographical data), one web search, and 14 YouTube videos.

52.9 percent of those removal requests were fully or partially complied with.

The worst countries for takedown requests over the period were Brazil (291), Germany (188), India (142), the United States (123) and South Korea (64). Australia and Canada (16) were roughly equal.
Google has emerged as a strong opponent of the Federal Government’s plans to filter the internet for refused classification material, and has recently been revealed to have taken the step of contacting the US State Department — which has also expressed concern about the issue — on the matter.

In a blog post, new Electronic Frontiers Australia chair Colin Jacobs said the digital rights advocacy group was encouraged by Google’s move, which he said could only be taken as a “good faith attempt to be a better internet citizen”.

“Around the world’s it has often been difficult to get a picture on how prevalent such requests are and the Google information will be examined with some interest. The fact that they have released these statistics voluntarily is a welcome sign and Google should be congratulated for doing so. They have raised the bar for the other companies that play such an important role in managing and safeguarding the information that makes up our digital lives,” he said.