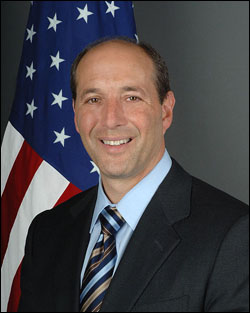 The United States’ Ambassador to Australia last night said there were “other means” available to achieve the goals of the Federal Government’s internet filtering project, adding to the impression that the US disapproved of the project.

US Ambassador Jeff Bleich (pictured) responded to a question on the ABC’s Q&A program last night, saying the US had told the Australian Government that it had been able to accomplish the goals of the filter — which Bleich described as capturing and prosecuting child pornographers and others who use the internet for “terrible purporse” — without using internet filters.

“We have other means and we are willing to share our efforts with them in order to allow them to at least look at a range of choices, as opposed to moving in one particular direction,” he said.

News Ltd blog The Punch reported in late March that US State Department spokesman Noel Clay said the US has raised concerns on the matter with Australian officials. The US has been broadly critical of countries implementing internet censorship regimes.

Bleich said the US was working with Australia on the issue in an “ongoing conversation”, where the US was also learning things from Australia. However, he said the US had to be “very clear” that the internet needed to be free.

The full clip of the program is available online at the ABC’s web site.

The news comes as Communications Minister Stephen Conroy last night again defended the filter project, saying it was “a modest measure” which reflected “long-held community standards abuot the type of content that is unacceptable in a civilised society”.

“Those who claim that the Government’s approach is akin to the sort of political censorship practiced by authoritarian regimes are simply misleading the Australian public,” he said in a speech to the Sydney Institute.