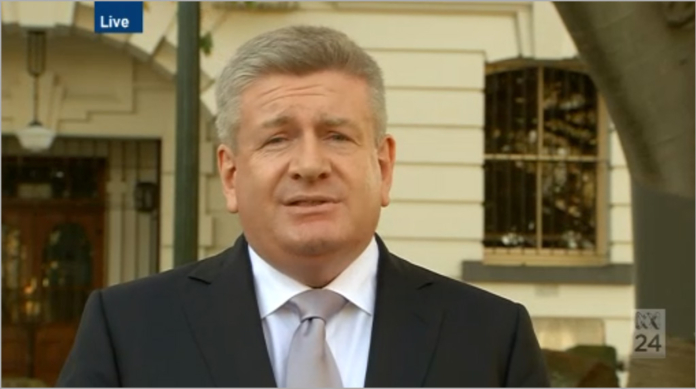 news Communications Minister Mitch Fifield this afternoon attacked what he said was the “deceit” inherent in Labor’s new National Broadband Network policy, in a brief press conference in Melbourne which appeared to last less than ten minutes.

At 12:16PM this afternoon, Minister Fifield called a press conference for 1PM in Melbourne. The conference lasted around ten minutes — much less than most policy-oriented press conferences during an election campaign — with the Liberal Senator taking just two questions from journalists on the issue, after giving a brief statement.

You can read the transcript of the entire press conference in this PDF document.

In his statement, Fifield said Labor’s new policy was based on “two great deceits”.

However, Fifield said the Coalition’s version of the NBN was actually on track to deliver by 2020, and had met every one of its milestones over the past eight quarters.

The second “great deceit”, according to Fifield, was Labor’s claim that it could deliver its NBN policy for $57 billion in total funding — just $1 billion more than the upper estimate on the Coalition’s NBN plan.

This meant, Fifield said, that Labor’s version of the NBN would take “at least two years longer to deliver, and cost at least $8 billion more”.

“When the Coalition came into Government, we inherited a mess,” he said. “Malcolm Turnbull brought order to bear where there was chaos.”

“So badly managed was the NBN under Labor that they were in a situation in four states where contractors had downed tools … the story of the NBN under this government has been a good one — a new board, new management, a new mandate.”

Fifield said the only threat to the NBN rollout at the moment was for Labor to take over and ensure that “Australians wait longer and pay more.”

“Australians will pay more through their monthly Internet bills,” he said. “I don’t support the NBN being delayed by two years, and I don’t support [paying] $8 billion extra.”

Labor has stated that it would ask Infrastructure Australia to review the future of Australian premises who would not initially receive FTTP under its policy. This may result in long-term FTTP upgrades for Australians who initially received FTTN or HFC cable technology to their premises.

Fifield noted that Labor had not yet outlined the cost of going back and ‘retrofitting’ these premises.

Asked by a journalist whether the Coalition’s NBN model was only a “short-term fix”, Fifield said: “No, ours is a method of get the NBN out to Australians sooner and faster; to see the NBN rolled out as fast as possible and at a lower cost.”