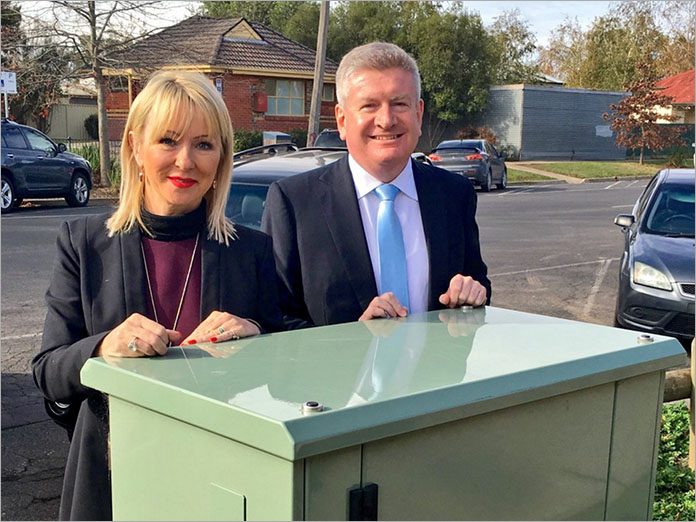 feature Sometimes the NBN company gets its node placement right. And sometimes it doesn’t. Today, Delimiter is proud to present a photo gallery entitled Nodes Behaving Badly, in which we highlight some of the worst Fibre to the Node infrastructure placement that Australia has to offer.

As you may recall, several weeks ago Delimiter put a call out there.

The idea with this new article was to look at the new stuff. Right around Australia, right now, the NBN company and its contractors are deploying thousands upon thousands of brand Fibre to the Node cabinets and micronodes.

Most of this infrastructure has been deployed in sensible locations. But with so many thousands of nodes, the NBN company was bound to get a few wrong. In this photo gallery we’ll chronicle some of those examples, and offer modest suggestions for improvement.

This first photo was sent in by a reader named Marc. His comment? “FlexiHire are going to need a taller security fence”. We have to agree … that barbed wire doesn’t look so threatening when you can just hop on top of a friendly neighbourhood node and jump over!

Particularly puzzling is why the NBN company felt it had to build a concrete base for this node that looks to measure more than half a metre. Why was that necessary? 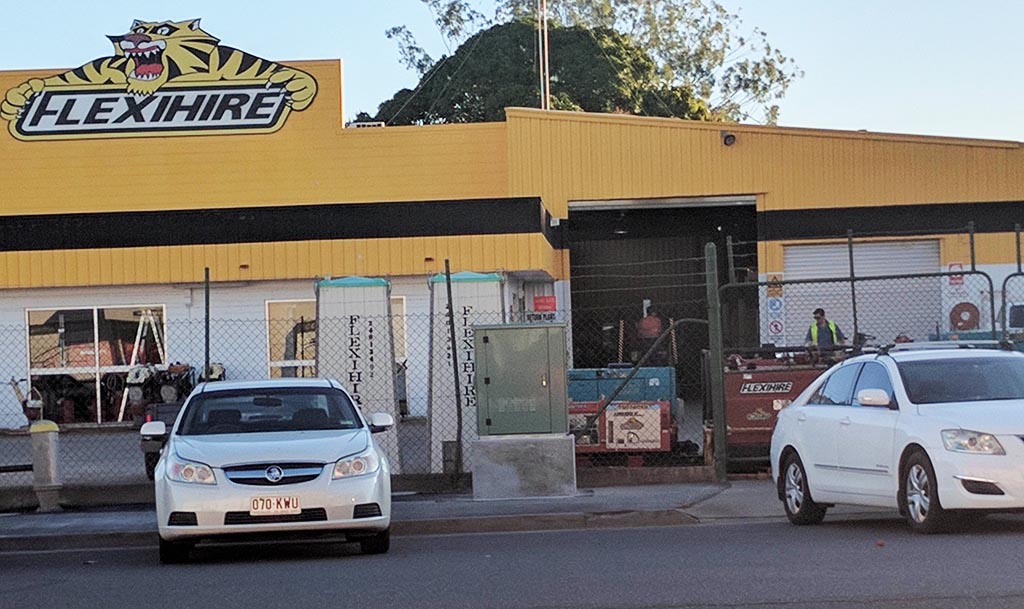 In this next photo, sent in by Riley, the NBN company has left very little space for pedestrians to pass by its node. This looks like a tight squeeze … especially if you have a stroller for your child. 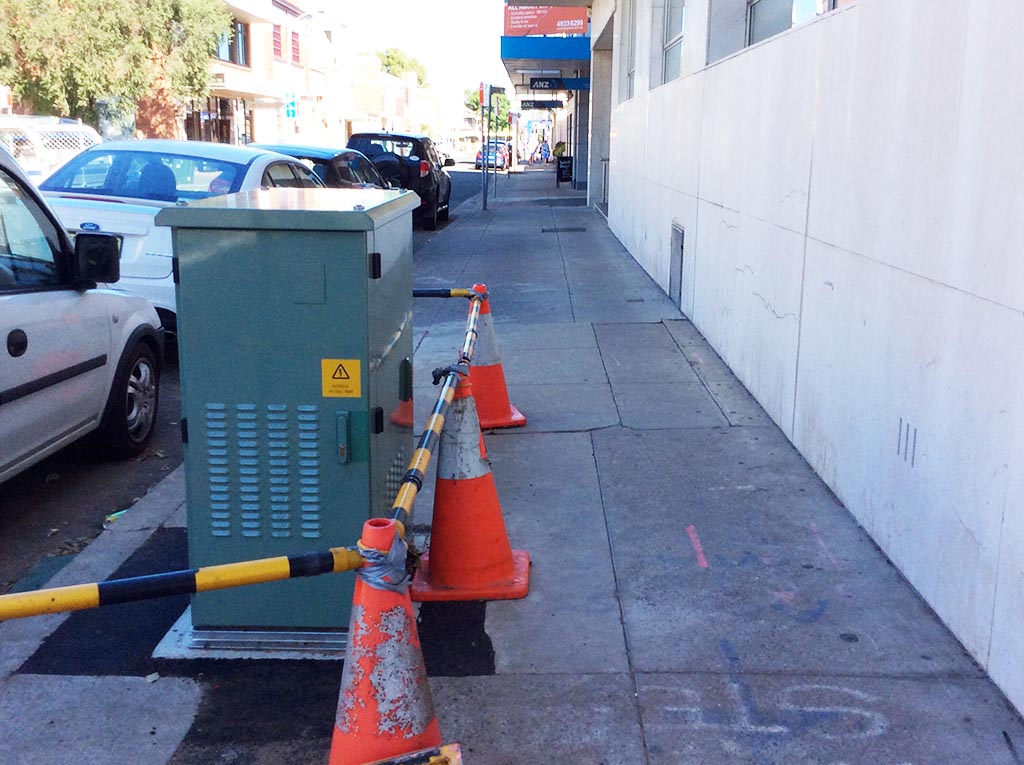 Putting nodes a little bit too close to narrow footpaths is become a NBN company habit: 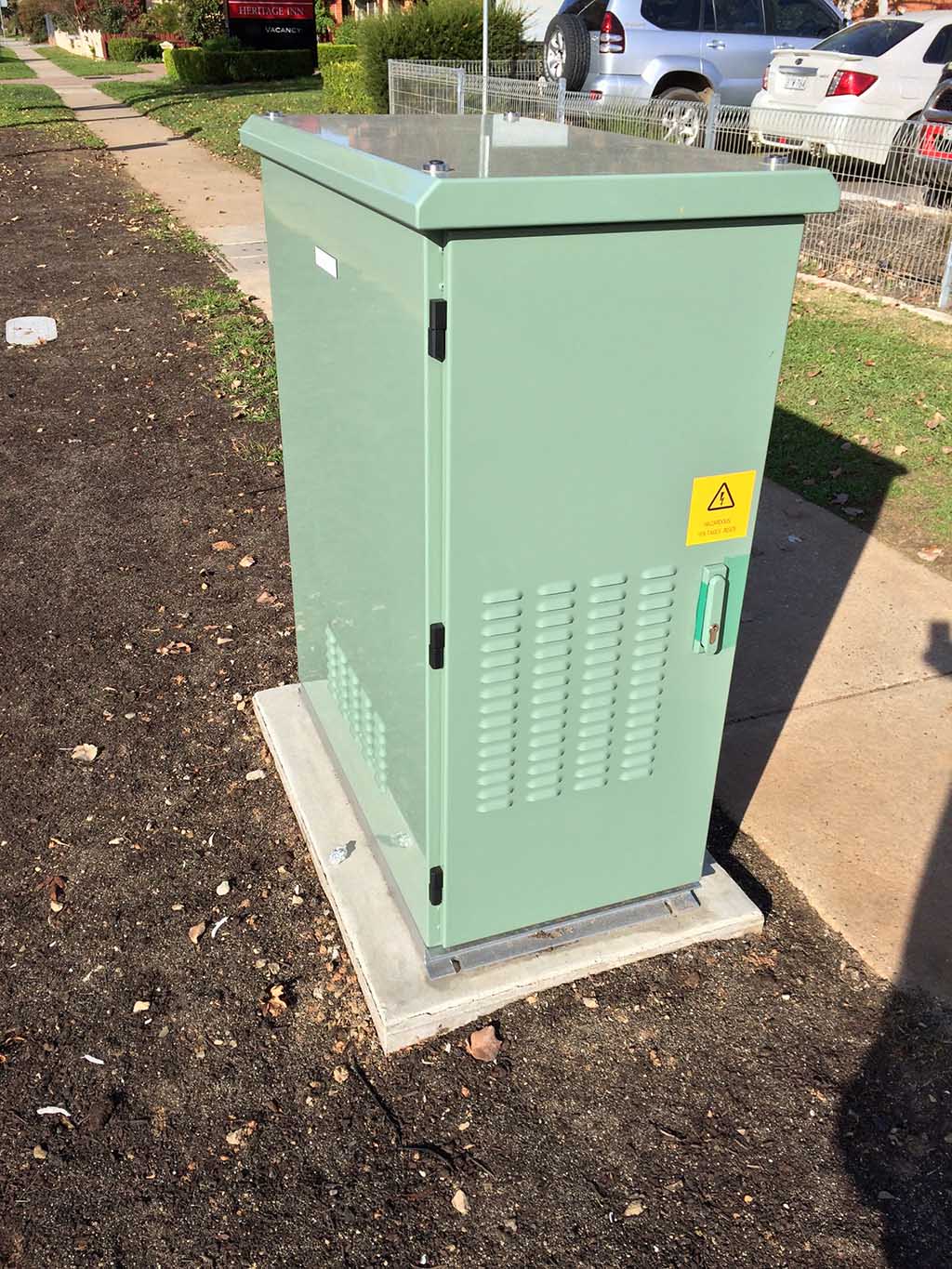 As well as in inconvenient spots just around the corner from an ATM machine where people are sure to bump into it … right next to the garbage bins. 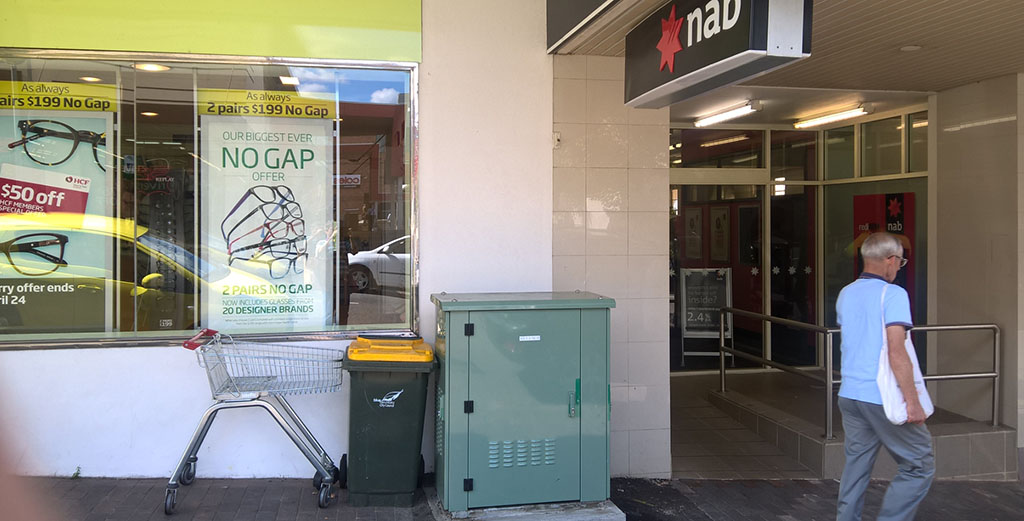 In this next set, we have a series, which we’d like to call “Now you see it, node you don’t”. Reader Robert tells us that the node in the below photo was installed in early April 2016. 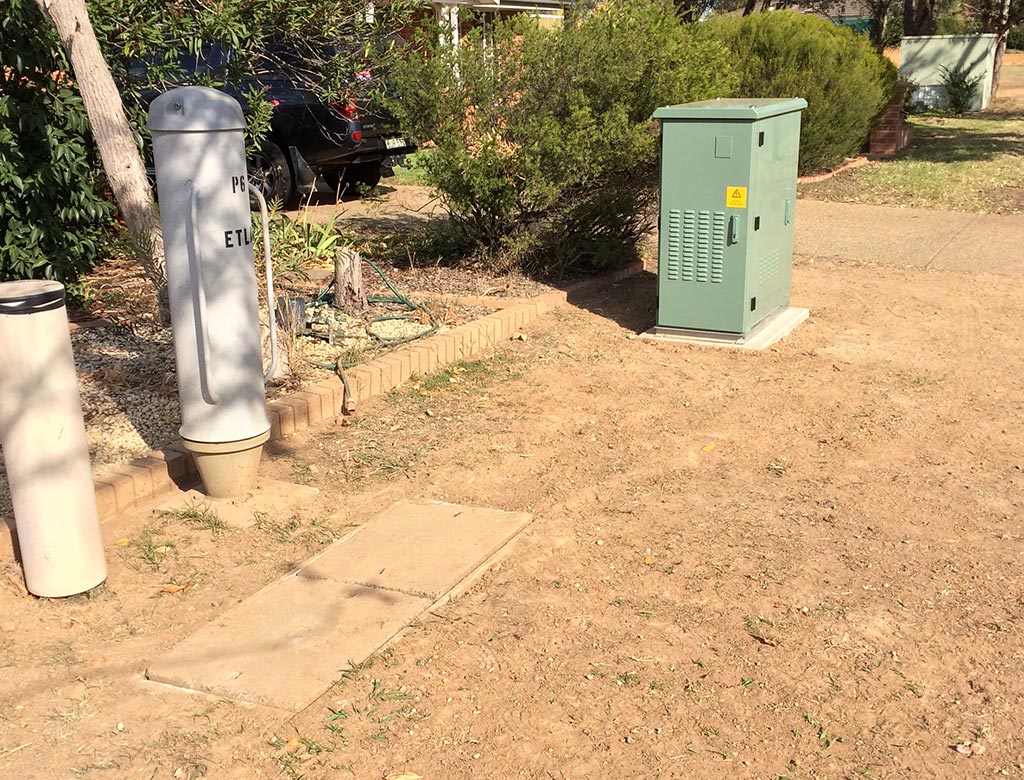 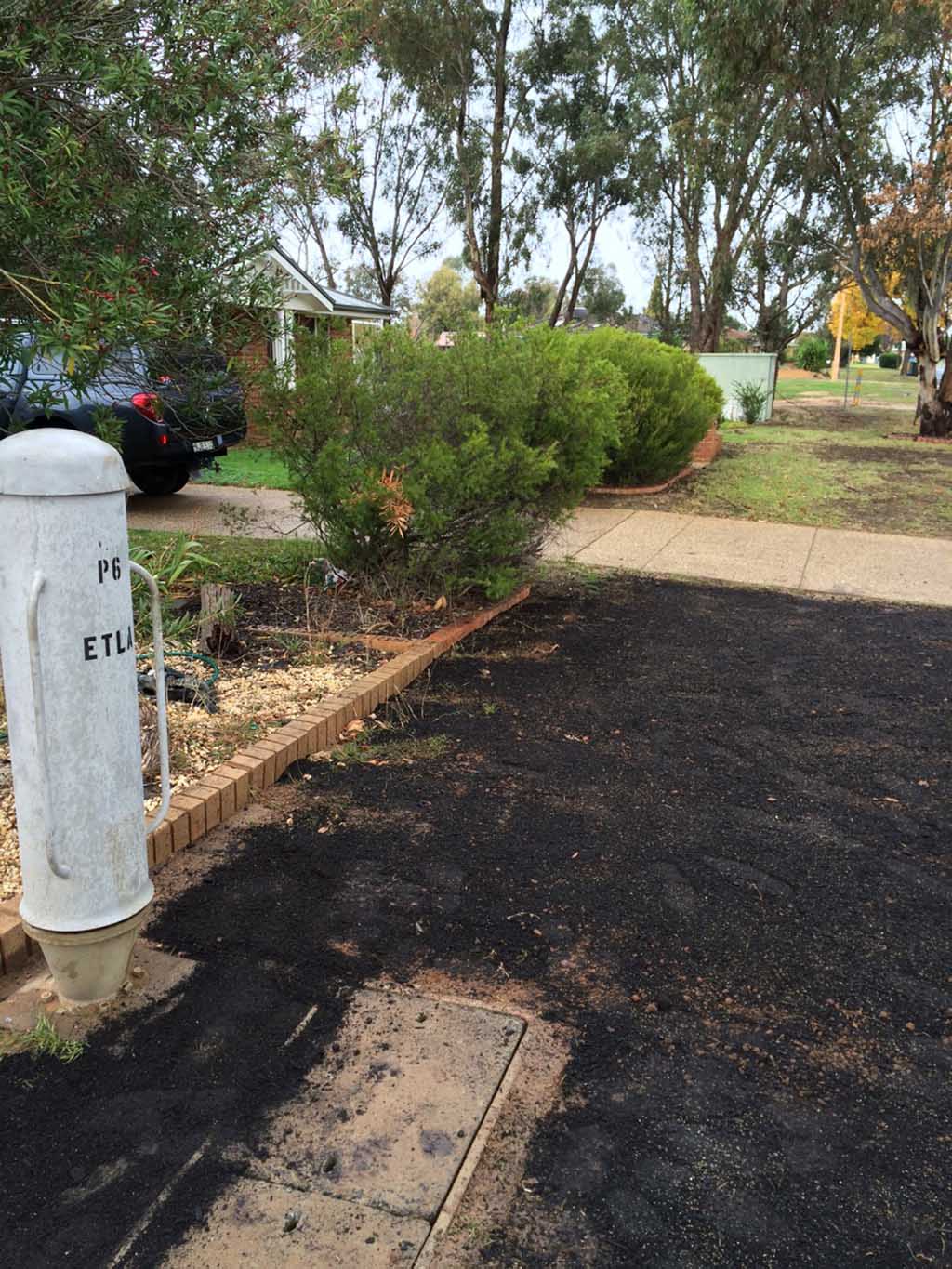 And then later that same month, the node appeared to have been moved 200m down the road to join a friend: 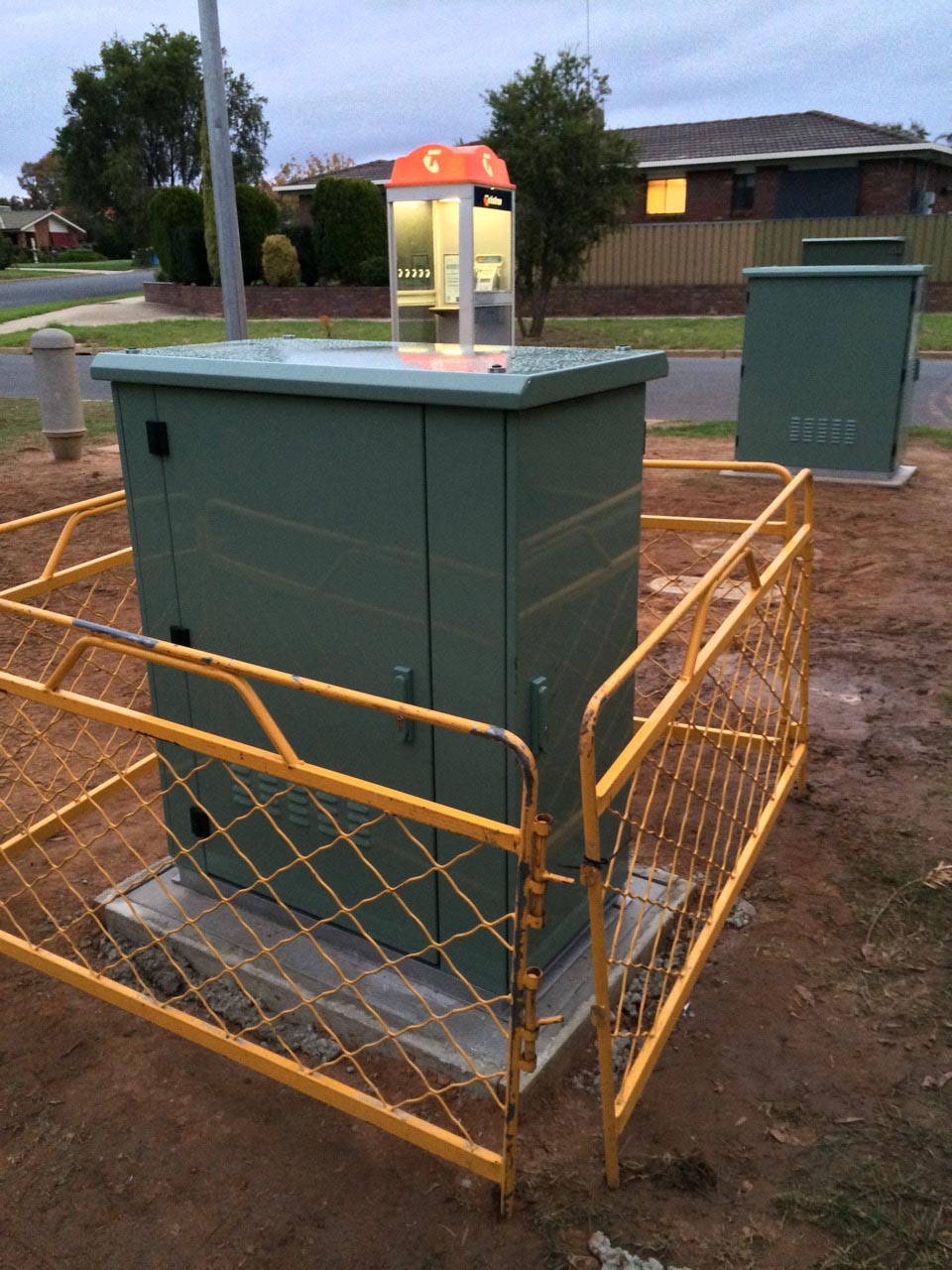 This practice of putting nodes with friends (in pairs) appears to be a habit of the NBN company. We’ve seen photos of quite a few nodes together. These two aren’t quite close enough to hold hands, but they are at least kissing cousins:

And the NBN company also appears to enjoy placing nodes close to other infrastructure. This looks like a Telstra “Top Hat” cabinet: 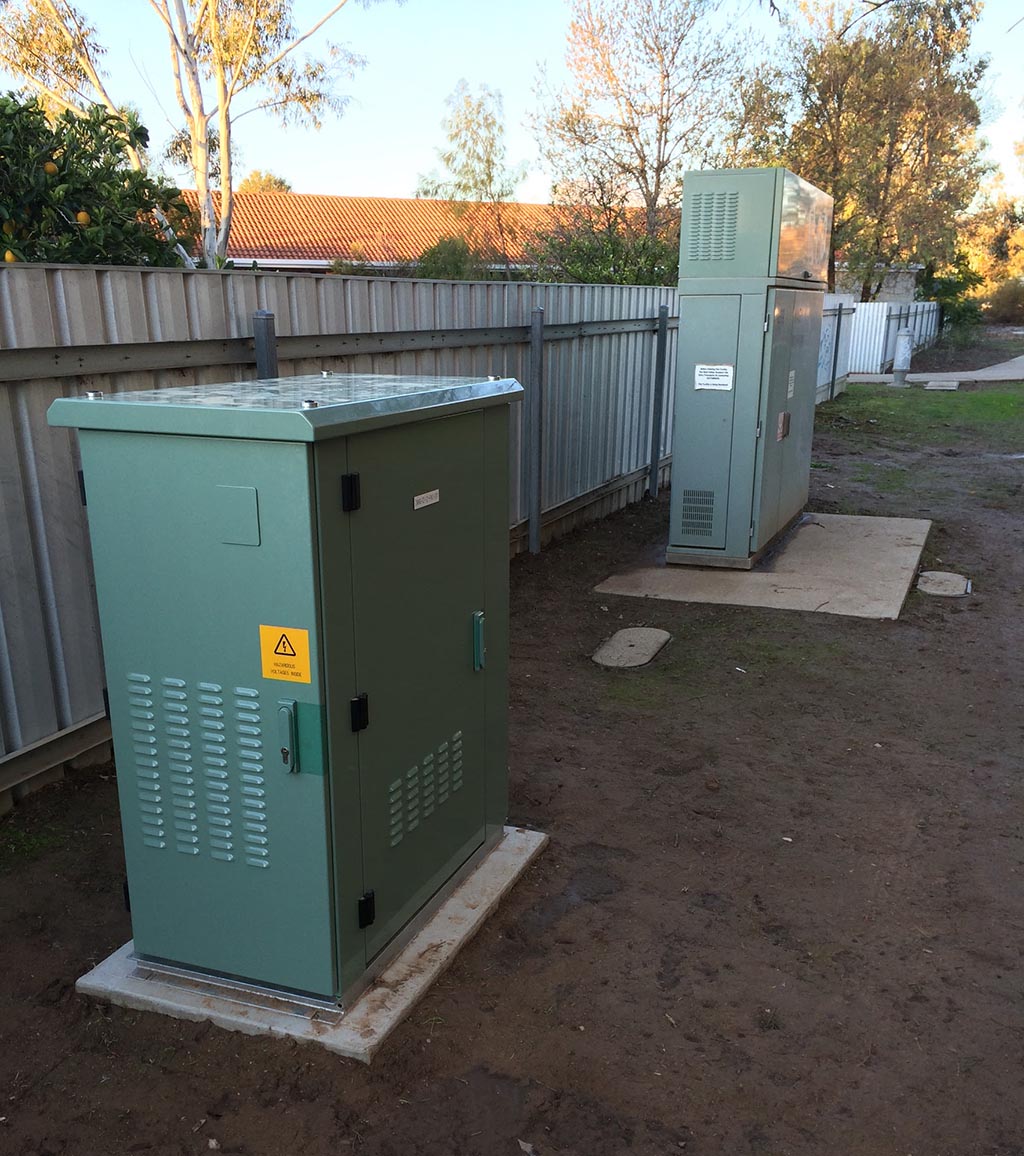 Then there is the ever-popular telephone box placement. Not sure why …? 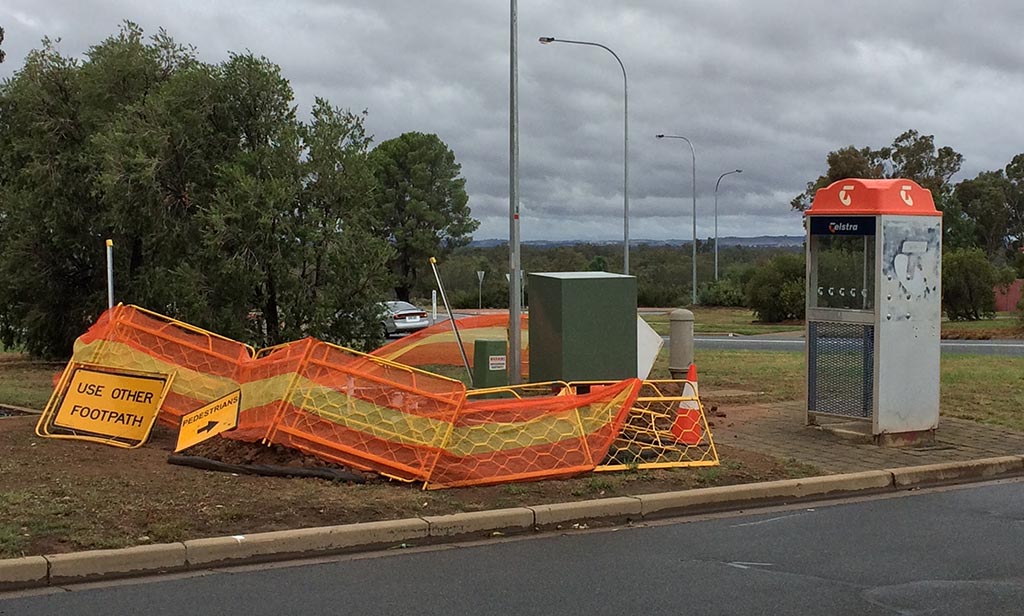 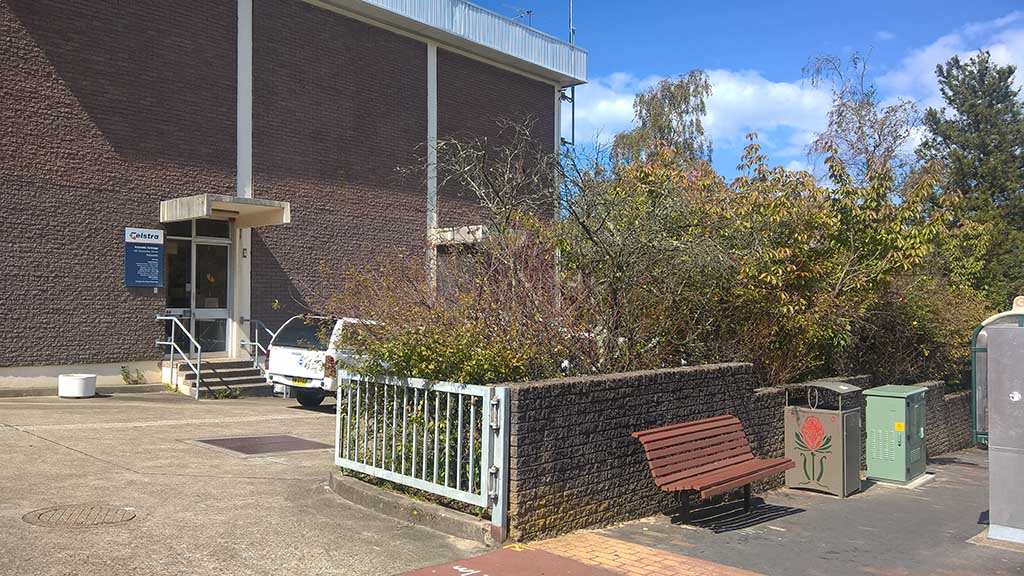 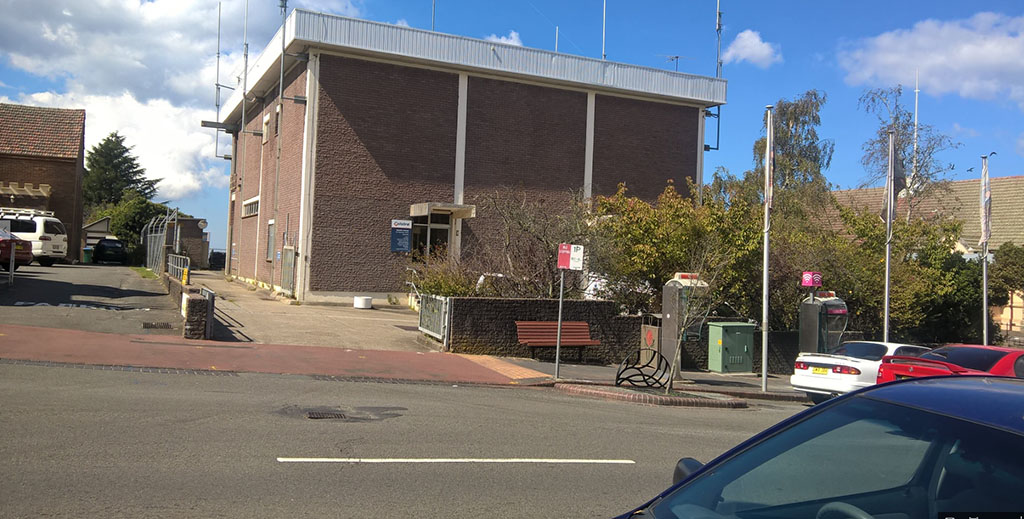 We’re not sure if the box in the distance is also a node or something else, but this pair combined look to be doing a fantastic job of ruining a harmonious nature strip: 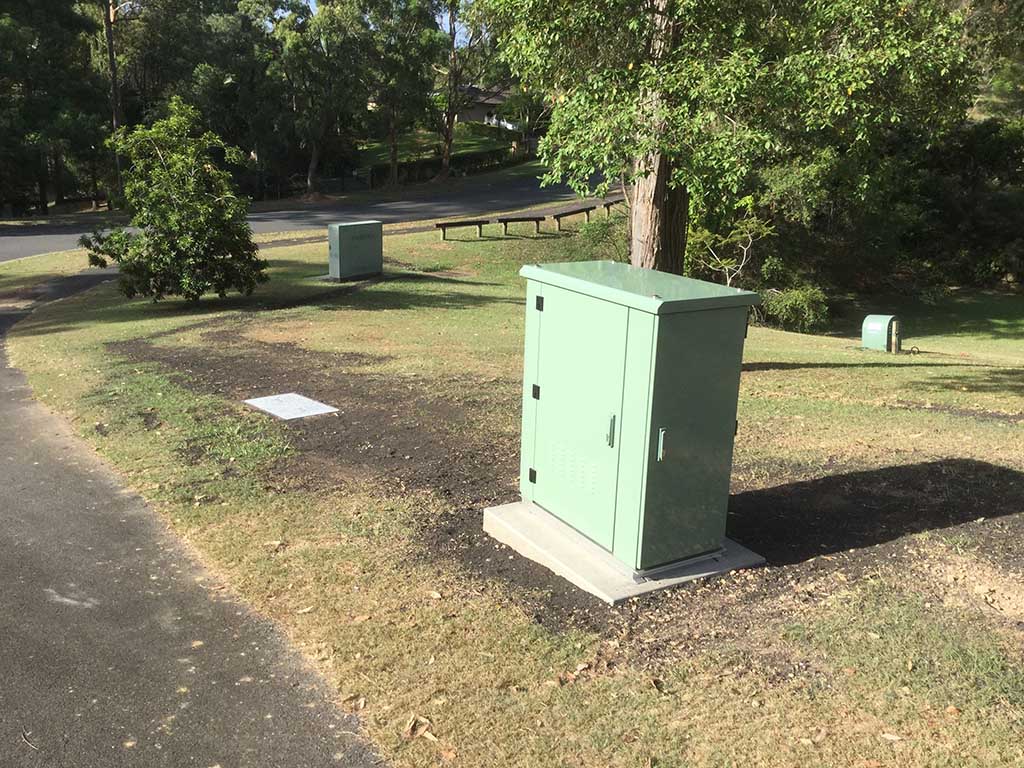 We don’t think this is a node, but it does look like telecommunications infrastructure of some kind. We’ve included it in this gallery because we don’t know why it has its own little set of stairs and fence in the middle of nowhere. 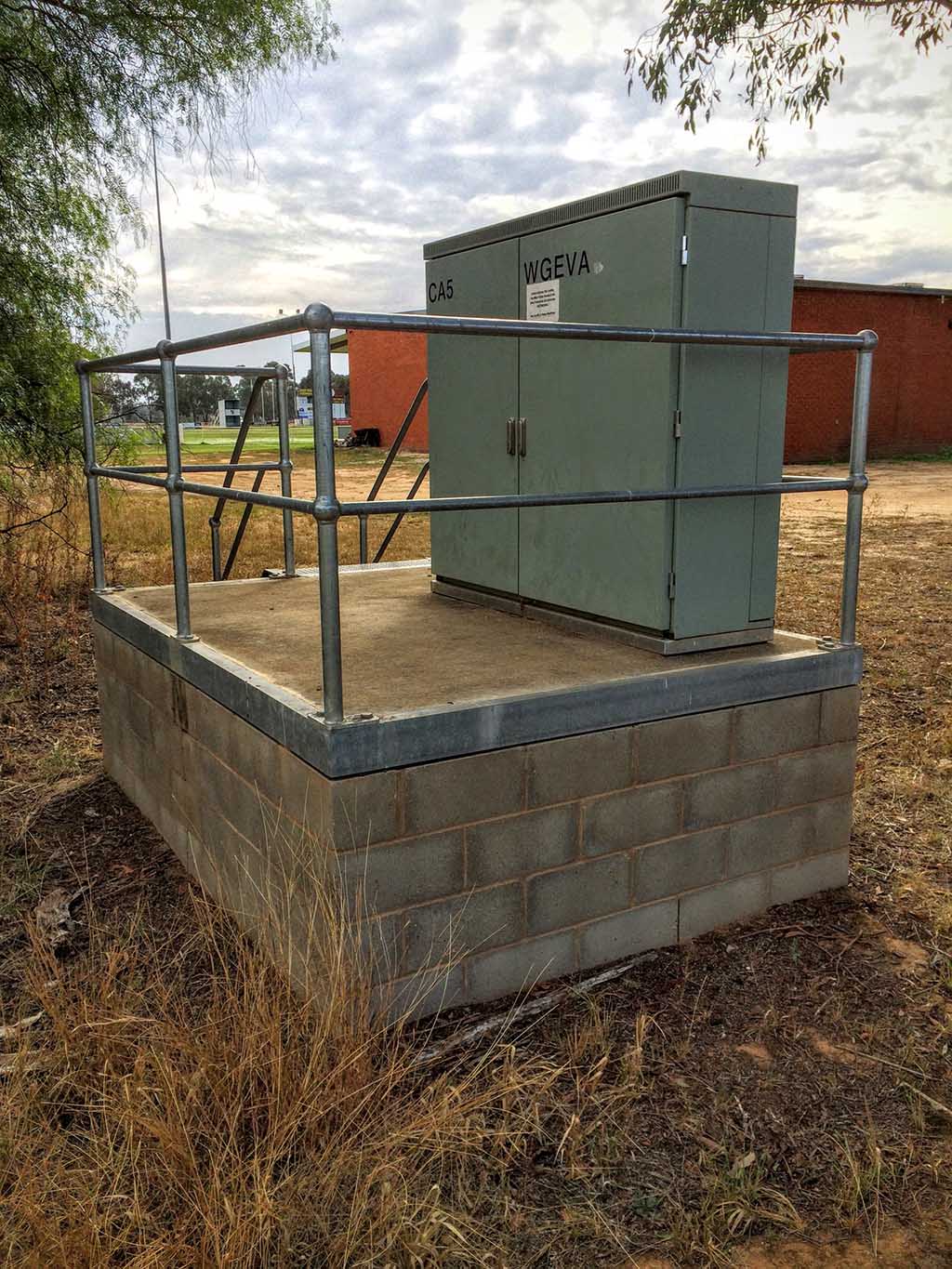 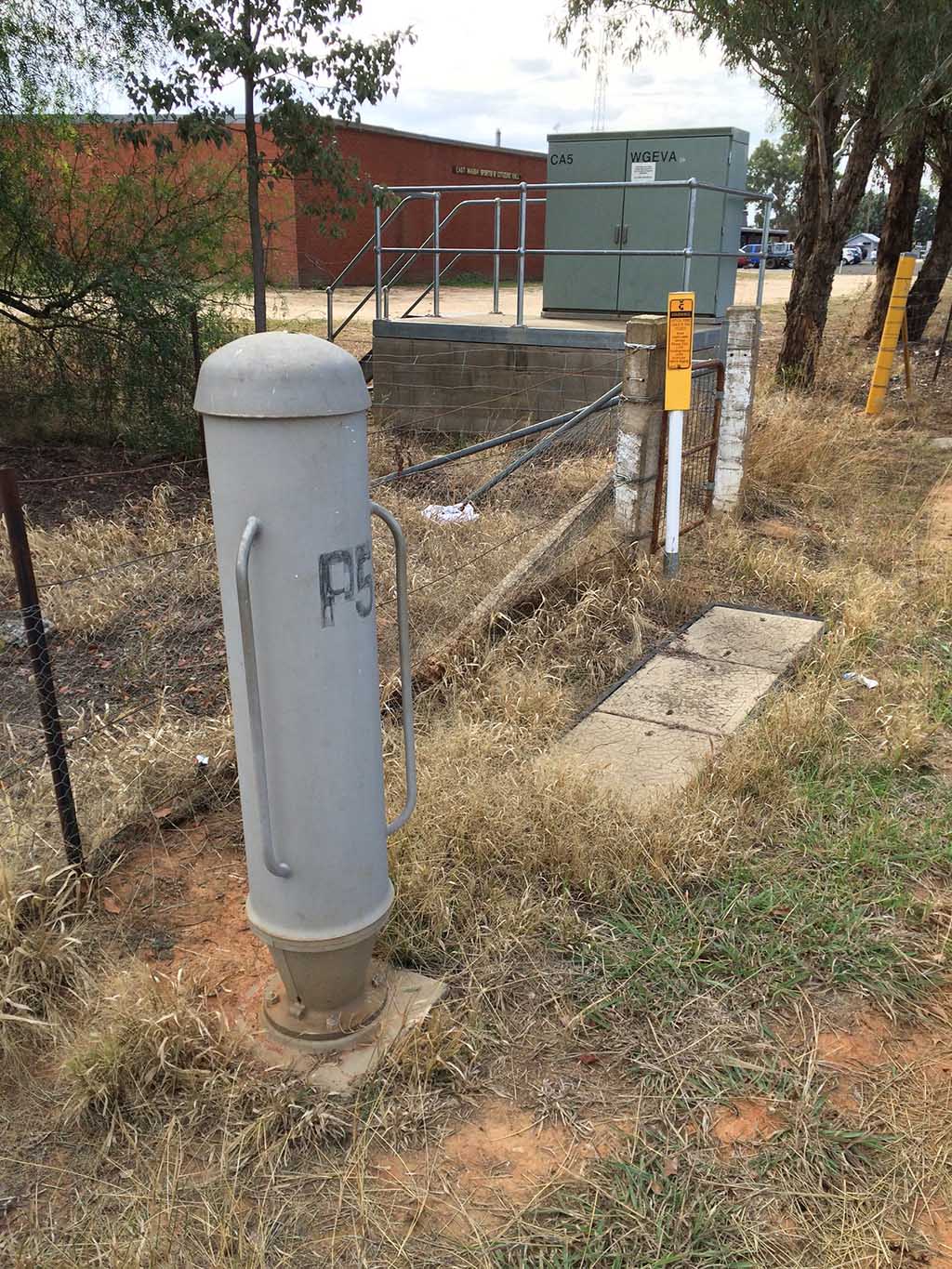 Destruction of property also appears to be a thing associated with nodes. Here we see a node that has destroyed a previously nice-looking footpath (are they going to fix that thick black line?!): 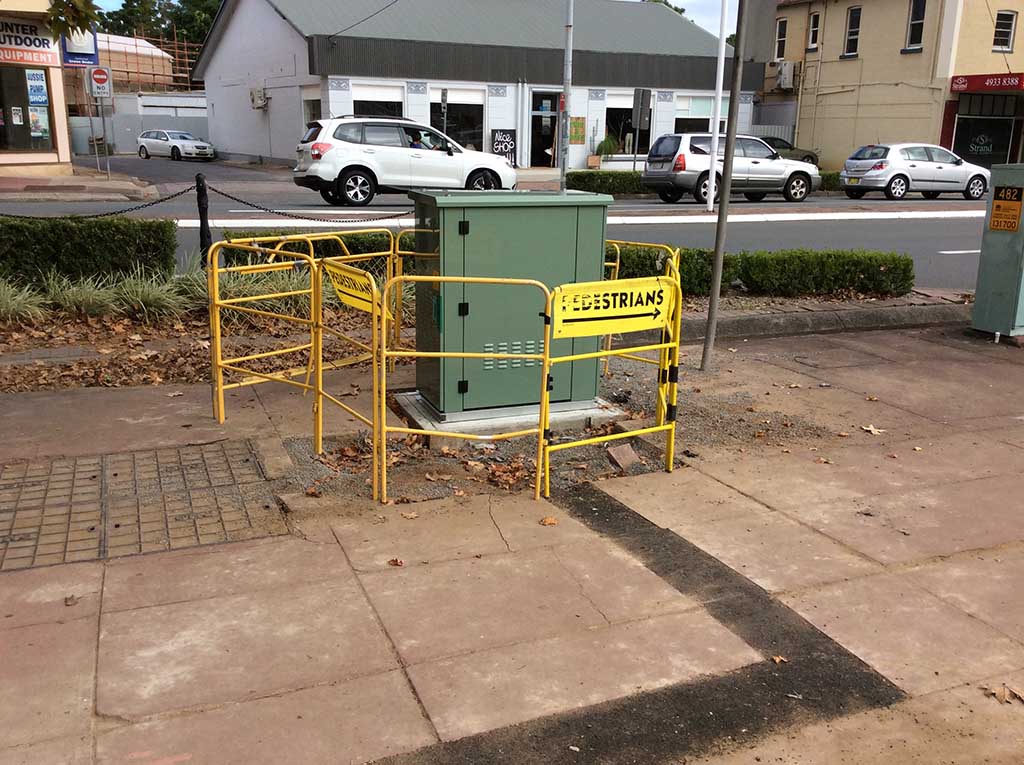 Here’s one that has killed off some lovely interlocking paving stones: 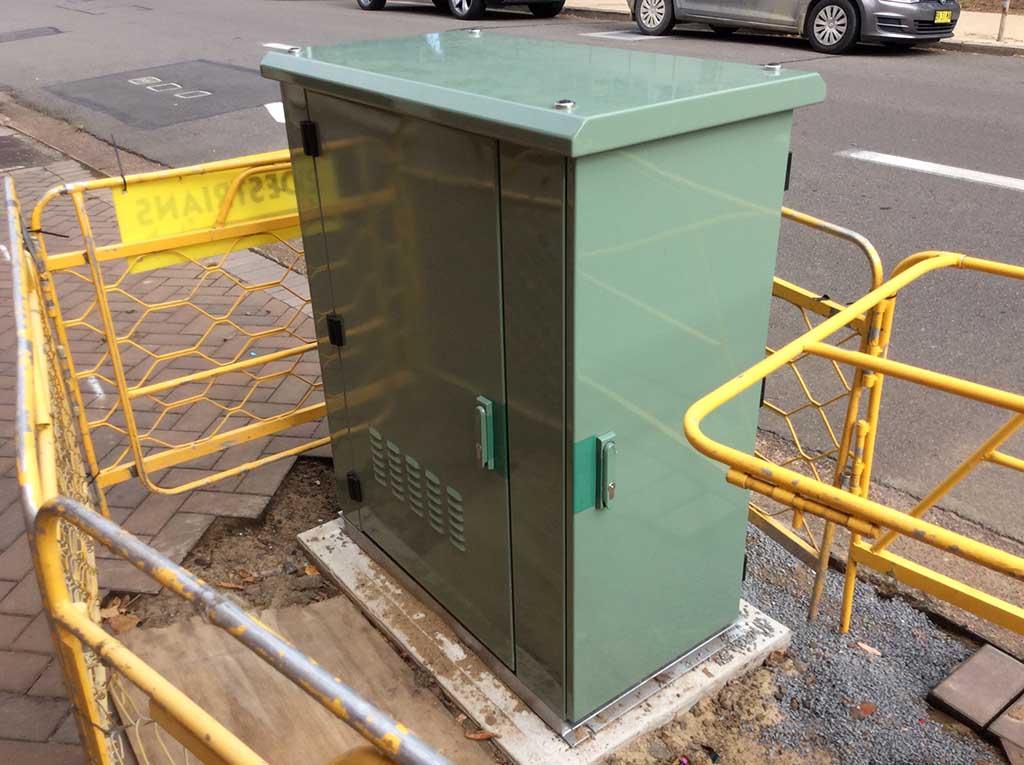 And here’s another node that appears to have created excavation work in a front garden: 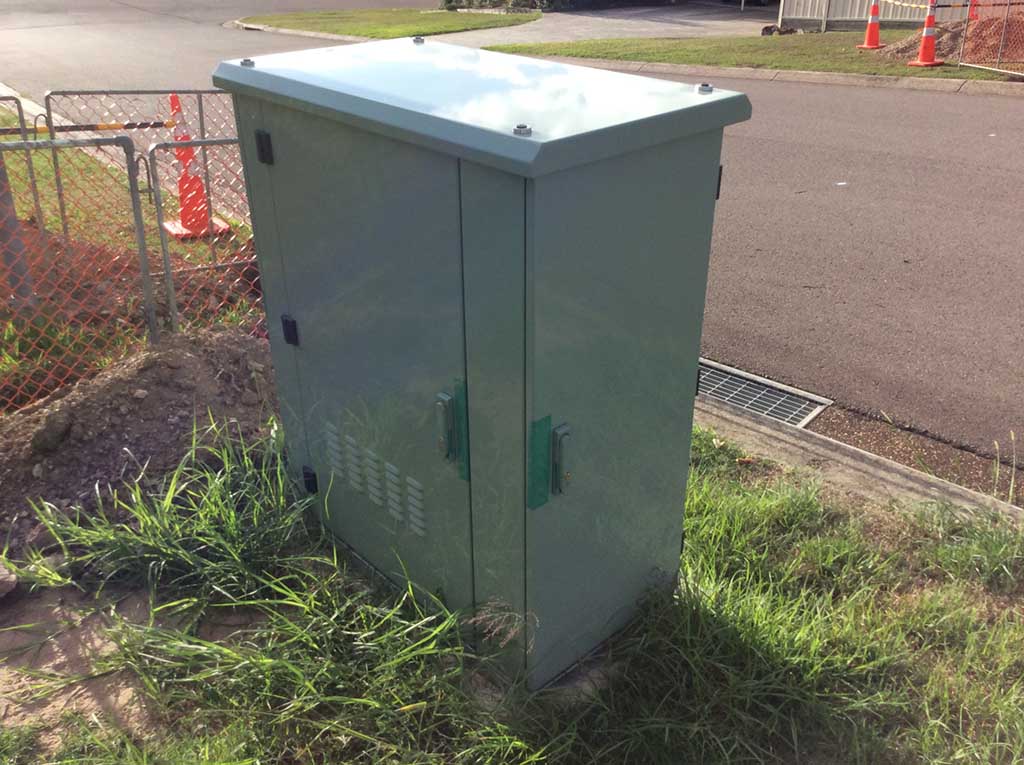 Thanks, Riley, for those last three shots.

And for the fun factor, we should also remind people at this point that it’s likely that many of the NBN company’s ‘micronodes’ are completely unsecured and open to public access. Here’s one which was opened by a reader without any special tools. Certainly some of the local wildlife had no problem getting inside. 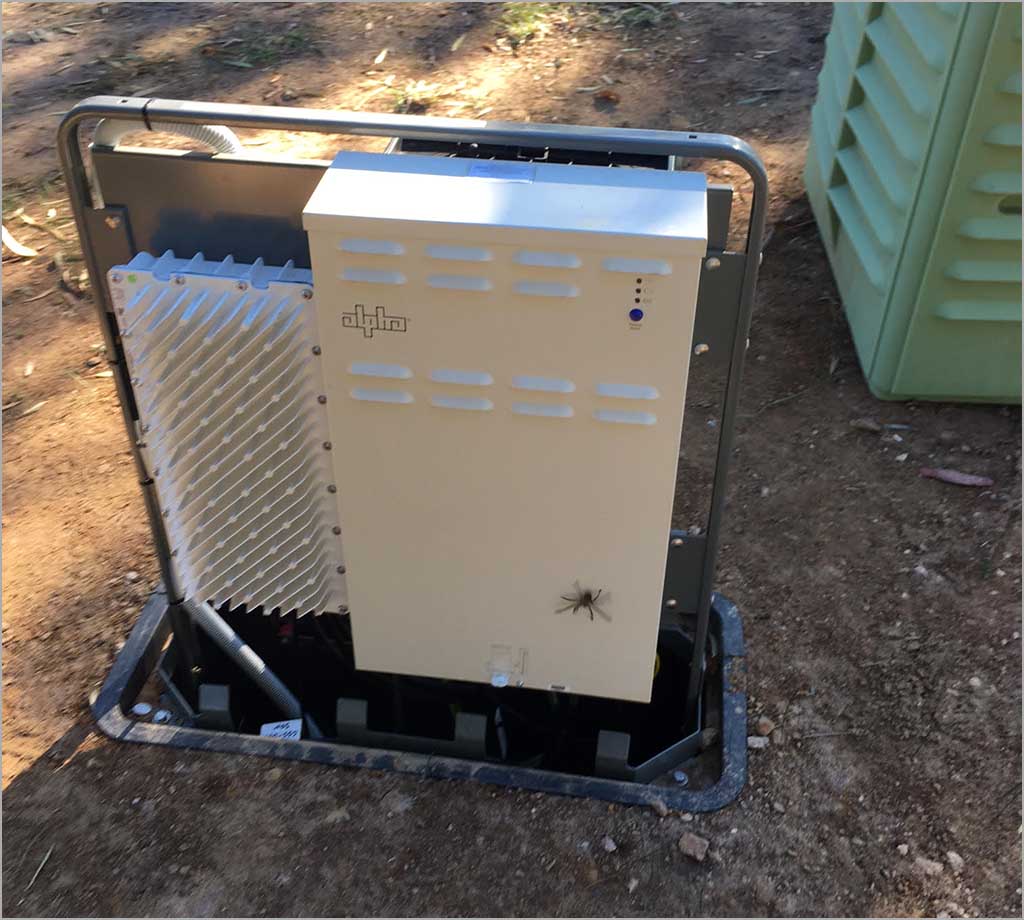 Now, I want to make a couple of statements summing up what we’ve seen here.

Firstly, I don’t want people to get the impression that all of the NBN company’s FTTN placements have been bad. I’ve seen hundreds of photos of nodes over the past few weeks, and what I’ve given you here is a selection of examples where the NBN company may have done things wrong, or chosen its node placement poorly. There may be valid reasons … but those reasons are not immediately apparent.

There are plenty of examples where the NBN company has chosen its node placement well — nodes in locations where they are not in the way or causing inconvenience for residents and businesses in the area.

However, an important to thing to consider is that even when the NBN company has chosen a position well for one of its nodes, that doesn’t make the node itself inherently attractive. Take this photo below: 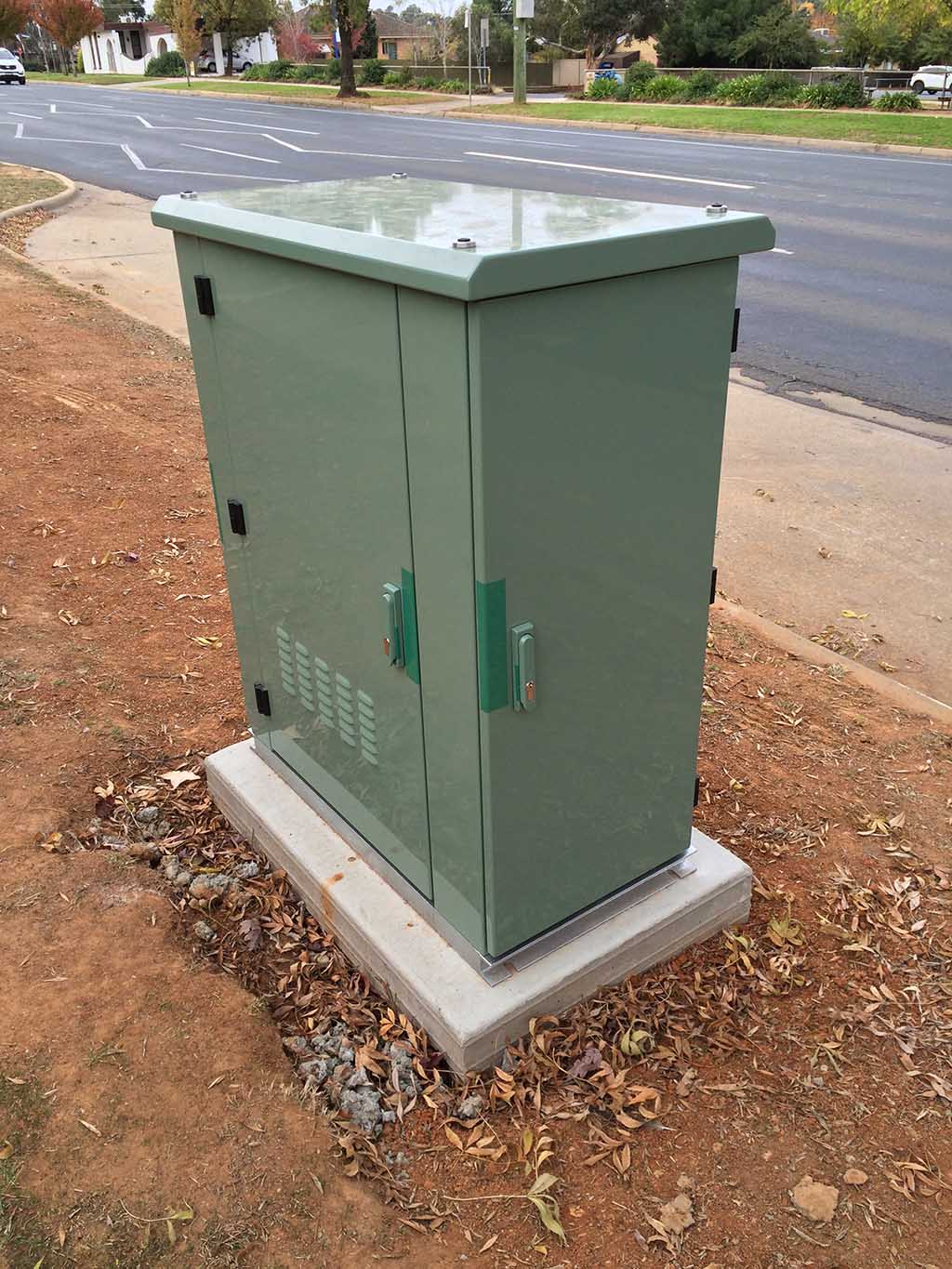 This particular node is not much of a problem. It’s not in the way of pedestrians or traffic, it’s not clumped up with other infrastructure, and it’s not destroying anything (such as nice pavement) to do its job. It’s a nicely placed node.

FTTN nodes are inherently ugly boxes which sit on the side of our streets and create an eyesore. They do not ‘blend’ into the natural or human environment in any way, shape or form. Instead, they just sit there looking blocky and unattractive.

It’s true that the NBN company was deploying boxes on streets as part of Labor’s previous FTTP initiative — these are called Fibre-Serving Area Modules and are also quite bulky.

However, there were only going to be between 4,000 and 6,000 FSAMs deployed around Australia, nowhere near the 30,000-odd nodes that the NBN company will need to deploy to enact the Coalition’s FTTN model.

The FSAMs did require a substantial number of node-like units to be deployed as well — these are called Fibre Distribution Hubs. But because they don’t require electrical power, they are substantially smaller than the FTTN nodes. Here’s an example of one of these: 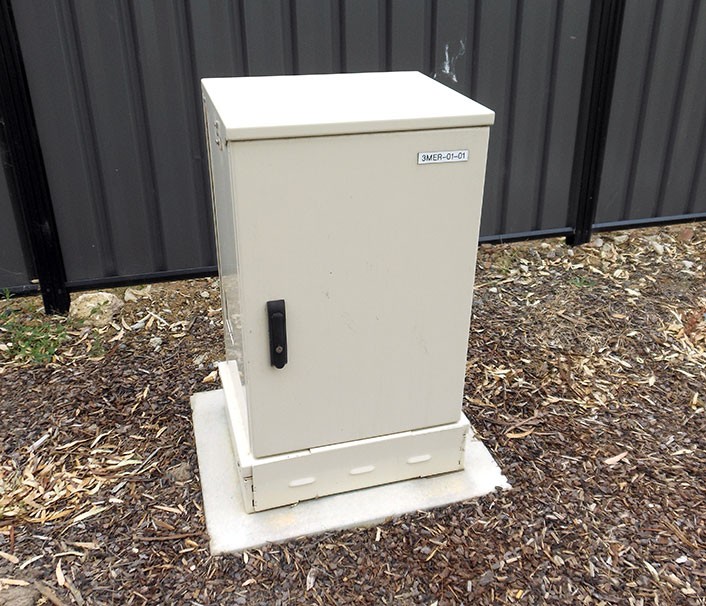 Under the ‘skinny fibre’ model for NBN fibre, these Fibre Distribution Hubs can be deployed under the ground — meaning there would be a whole heap less boxes on our streets in general. It might look something more like this (and yes, the lid goes back on): 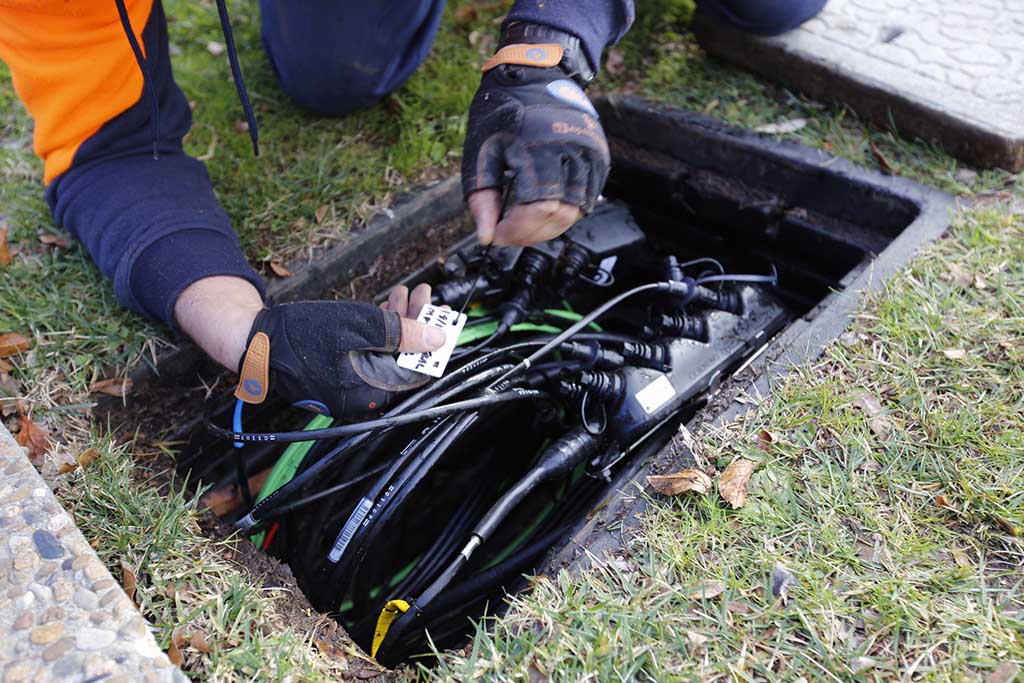 One of the big selling points of the Multi-Technology Mix model for the NBN was that it would not require “digging up” people’s driveways in order to lay new fibre-optic cables to their house.

But the FTTN has its own problems when it comes to physical infrastructure. 30,000 of these ugly metal boxes plonked in inconvenient locations on streets all around Australia?

Delimiter wishes to thank Robert in particular for his incredible gallery of NBN infrastructure, many of which were used in this article.