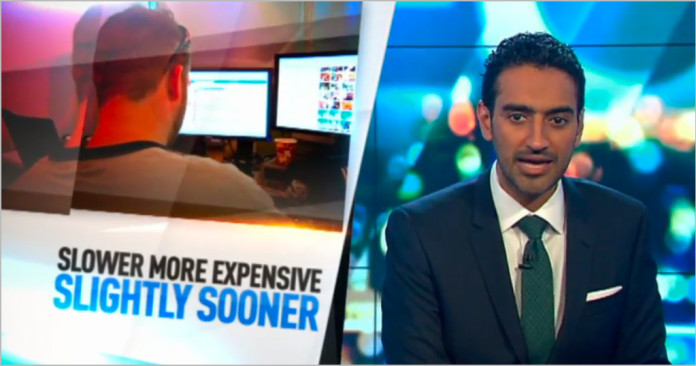 news The outspoken host of Ten TV show The Project has taken a pickaxe to the Coalition’s Multi-Technology Mix approach to the NBN, consigning the model to the rubbish box in a lengthy segment which also included appearances by founding NBN chief executive Mike Quigley.

In a segment on last night’s episode of The Project, Aly said that the broadband plan which then-Opposition Leader Tont Abbott had branded as “strong and credible” before the 2013 Federal Election “mightn’t be as amazing as Tony would have us believe”.

Delimiter recommends readers click here to watch the full segment online. It starts at about the 22:30 mark.

Aly pointed out that the estimated cost of the Coalition’s version of the NBN, as well as its projected completion deadlines, had slipped out substantially from the initial estimates given by then-Shadow Communications Minister Malcolm Turnbull prior to the 2013 Federal Election.

The segment included part of a speech which Greens Deputy Leader Scott Ludlam gave in the Senate in February this year, in which Ludlam stated:

“Instead of futureproofing the country with an end-to-end fibre network we would use a bit of copper, a bit of HFC, some satellites, some wireless towers—we would have this mongrel network big parts of which would be obsolete on the day they are built and will need to be torn up and replaced with the kind of end-to-end fibre network that this parliament legislated for.”

In addition, the segment included quotes from founding NBN chief executive Mike Quigley who told The Project that the good thing about a “fibre-based NBN” was that it had “enormous amounts of capacity”, unlike a “copper-based” NBN.

“It’s just such a pity that we’re no longer building such a network,” Quigley said.

Quigley and Aly acknowledged that Labor’s previous, Fibre to the Premises-based NBN had its problems, with the former NBN chief executive stating that it had been running about 12 months behind schedule under his watch, but Quigley denied that the project’s costs had blown out by anywhere near the $90 billion estimates publicised by Turnbull prior to the election.

“By turning the NBN into a political football, Australia’s global rankings for Internet speed has slipped, from 30th a few years ago, to this week 60th in the world,” concluded Aly.

“So if you’re watching this right now on the Internet, and you had to wait for even a second for this video to buffer, you know who to blame: Tony Abbott, and the guy who he says invented the Internet.”

Image credit: Still from The Project, believed to be OK to use under fair dealing