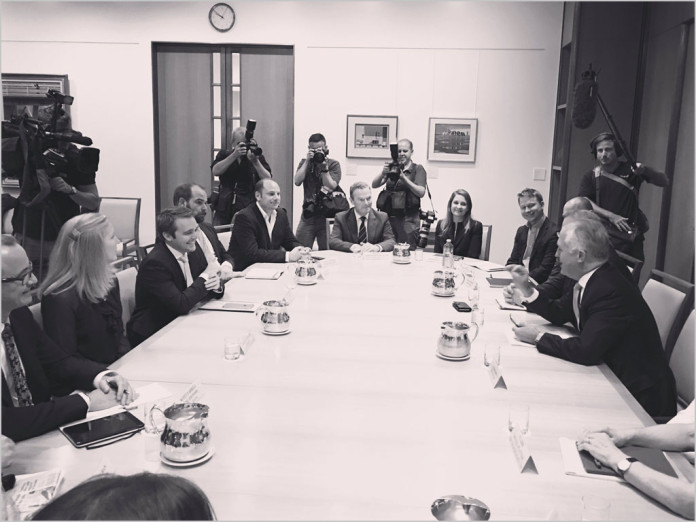 Financial services is the largest sector of the economy, employing around 450,000 people and contributing over $140 billion to the economy in the last financial year.

“Financial services is an enormous industry, it’s an enormous sector in which Australia has many competitive advantages … we’re in the same time zone as the big markets of East Asia and we’ve already seen great examples of innovation in the sector,” said Turnbull at the inaugural panel meeting.

Although Australia is a leading financial services market in the region, the sector is becoming increasingly globalised and exposed to technological disruption, Treasurer Scott Morrison said in a statement. Furthermore, many traditional financial products are being disrupted by the FinTech sector, which is well positioned to become a leading player in the Asia-Pacific.

“FinTech is at the cutting edge of innovation and will help to deliver more efficient financial markets and more customer focused outcomes for consumers,” Morrison said.

The new advisory group is part of the Turnbull Government’s commitment to innovation and entrepreneurship through the $1.1 billion National Innovation and Science Agenda, and will complement the Innovation Collaboration Committee being established under the Financial System Program.

“Innovation is the key to our future success and you’re leading innovators in that field and that’s why we’re here to confer with you and get guidance from you and see how we can help you do your work,” the Prime Minister told the panel.

The FinTech advisory group is to be chaired by Craig Dunn, Chairman of Stone & Chalk and Director of Westpac Bank, and will also include:

In a statement, Shadow Minister for Financial Services and Superannuation, Jim Chalmers, and Shadow Parliamentary Secretary for Digital Innovation and Startups, Ed Husic, welcomed the establishment of the new group.

“Labor extends its bipartisan support for the initiative, despite the fact that the government yet again declined the opportunity to advise of its intent to establish such a group ahead of this announcement,” the pair said.

“We see this as another example of the government saying it values bipartisanship in early stage innovation but failing to live up to its own words.”

“The importance of this advisory group cannot be understated. Given concerns of the Fintech sector about the failure of the Turnbull Government to effectively consult during the development of its equity crowdfunding laws, the establishment of this group is a vital measure to remedy its lacklustre approach to industry consultation.”

“Last year, Labor announced that a Shorten Government would set up a Treasurer’s Entrepreneur Council. The Council would bring government and early stage innovators together to ensure that broader government policy supports the growth of the startup ecosystem in Australia.”