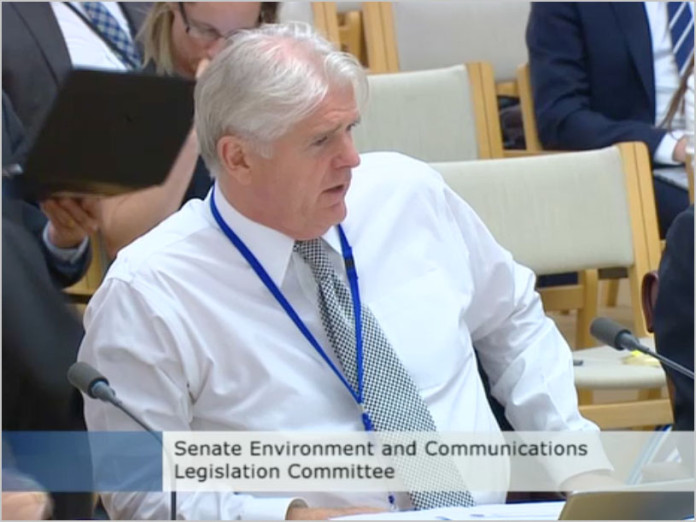 news The NBN company has flatly refused to say how much brand new copper it needs beyond its existing reserves of 1800km to make its Fibre to the Node broadband rollout model function correctly, in response to a question by one of the most powerful Senators overseeing its operations.

In Senate Estimates hearings in October last year, the NBN company made the remarkable revelation that it was purchasing 1800km of brand new copper cable to a cost of about $14 million.

At the time, NBN chief executive Bill Morrow said the new copper cable was not being used to replace Telstra’s ageing copper network, which is being used as part of the Turnbull Government’s preferred Multi-Technology Mix approach to the National Broadband Network, but rather to make interconnections between Telstra’s existing distribution ‘pillars’ to the new ‘nodes’ which the NBN company is deploying.

In 2016, it is becoming uncommon for new copper cables to be laid either in Australia or globally, due to the fact that the technology has been superceded by fibre-optic cable, which are technically superior on every measure.

At the hearings, Labor Senator Anne Urquhart asked the NBN company to clarify how much, on average, each pillar to node connection would need, as well as the current estimate was of the amount the NBN company would need to spend on brand new copper to deploy its Fibre to the Node and Fibre to the Basement connections to a planned 4.5 million premises around Australia.

In recent answers (PDF) to those questions filed with the Senate Environment and Communications Committee — of which Urquhart is one of the chairs — the NBN company confirmed it would need about 350 metres per node of brand new copper.

However, the company refused to answer Urquhart’s question of how much it would need to spend on brand new copper to deploy the MTM model around Australia.

“Due to ongoing supplier negotiations, the estimated cost and distance of new copper for the full FTTN rollout is commercial in confidence,” the company said.

According to the Senate’s own rules, the NBN company is not allowed to withhold information from the Senate on a commercial in confidence basis.

“A Senate order, adopted on 30 October 2003, states that, ‘the Senate and Senate committees shall not entertain any claim to withhold information from the Senate or a committee on the grounds that it is commercial-in-confidence, unless the claim is made by a minister and is accompanied by a statement setting out the basis for the claim, including a statement of any commercial harm that may result from the disclosure of the information.”

In practice, whether the NBN company is forced to reveal the information would depend on a vote of the Senate Environment and Communications Committee, which can compel the company to release the information. The Committee features a mix of Labor, Coalition and Greens senators.

The numerical make-up of the Committee means that it may be easier for opposition parties — Labor and the Greens — to source the information through the dedicated NBN Senate Select Committee, which the Greens holds the balance of power on.

On 20 January, Delimiter contacted the NBN company requesting the company release any document which constituted a purchase order for copper cable in the 2015 or 2016 calendar years. Delimiter noted that it was content for commercial in confidence information to be redacted from the documents released.

However, the NBN company has sent several communications back to Delimiter noting that finds the request confusing. “As per the terms of your request, it is unclear as to whether you are seeking specific documents or rather information,” the NBN company’s general counsel in charge of FOI requests, David Mesman, wrote in response.

Mesman also noted that the NBN company was likely to consider the release of purchase orders relating to its brand new copper needs as being commercial in confidence, although he admitted he had not yet examined the documents which would potentially be released.

The NBN company is not the only Australian telco which is currently deploying brand new copper cable around Australia.

The nation’s largest telco Telstra recently confirmed it was deploying brand new copper to many new housing estates. The telco stated that it was being forced to do so by government policy which stated that it was the provider of last resort in those estates. The telco wishes to sell retail voice telephony services over its new infrastructure, but believes that it cannot do so if it deploys fibre cables instead of copper.

opinion/analysis
Seems like the NBN company is a little … sensitive … about the hard numbers in terms of how much brand new copper it is deploying around Australia. If anyone can provide Delimiter with some updated stats on this matter, you know where our secure anonymous tips form is.

In the meantime, I would encourage the NBN Senate Select Committee to compel the NBN company to provide this information. I think the Australian public deserves to know just how much brand new copper is being deployed around Australia as a result of the Coalition’s controversial MTM NBN policy, and how much it costs.