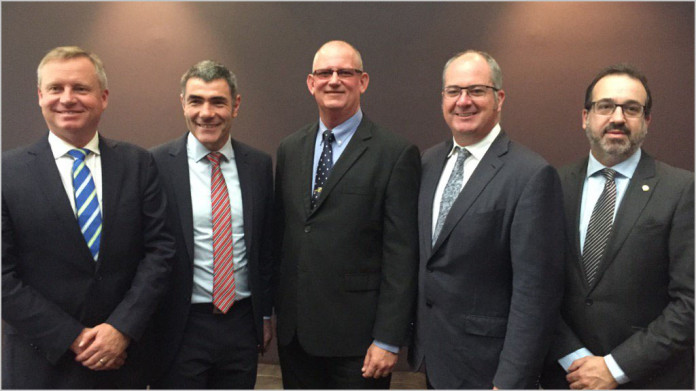 However, the bill also limits the types of government departments and agencies which are able to access metadata under the scheme. A number of agencies less concerned with serious crime are now no longer to access telecommunications data without warrants, unless the Attorney-General of the day approves their application.

Before the Melbourne Cup was held several weeks ago, Victorian Attorney-General Martin Pakula revealed that he wrote this week to his Federal counterpart, George Brandis, requesting that the Victorian Racing Integrity Commissioner be added back to the data retention access list.

On Friday last week Pakula met with a number of other racing ministers from all around Australia (pictured, above). On the agenda, he noted, was “phone data access”.

The Australian newspaper has since reported (we recommend you click here for the full article) that the meeting “unanimously” agreed to demand metadata access from Brandis.

“Ministers and officials at the conference were unanimous in our view that these powers are vital to protect the integrity of racing and that the commonwealth should reinstate access without delay,” Mr Pakula reportedly told The Weekend Australian.

The newspaper also reported that agencies had not been aware they had lost their metadata access until they read about it in the newspaper or were rebuffed by Telstra when they tried to access telephone records.

The news also comes as a number of other departments and agencies around Australia have reportedly written to Brandis seeking to access metadata under the Data Retention legislation.

Delimiter has filed a Freedom of Information request for letters from public sector departments and agencies who are seeking to be added to the list of agencies authorised to access retained metadata under the Government’s controversial Data Retention legislation.

“As far as I know, there is absolutely no reason why the Victorian Racing Integrity Commissioner cannot access telecommunications data under the current system, by getting a warrant. In my opinion, this is the appropriate way for a minor agency which is not concerned with serious crime or national security to access this kind of telecommunications data.

Unwarranted access to telecommunications data should only be allowed for serious crime investigations by major agencies. I fail to see how policing Victoria’s racing industry needs this access … and if there is serious crime involved, the Victorian Racing Integrity Commissioner can, again, get a warrant to access that data.

Or, if that proves too hard, it can work with the Victorian Police force, which already has unwarranted access to telecommunications metadata.

If Brandis does give in to this kind of request, he will open the door for every tiny law enforcement agency around Australia to access the vast metadata archives which Australia’s telcos are holding on Australians. The requests will be endless. He must hold firm to the intentions of the recently passed legislation and ensure that the gates are not flung open for this kind of frivolous request.”