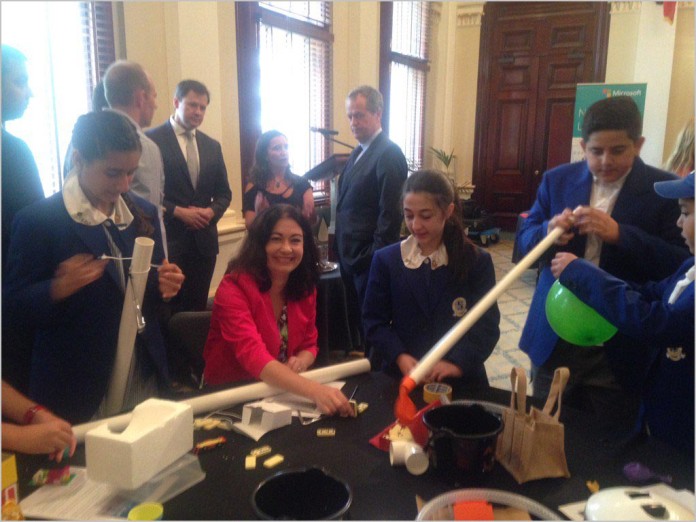 news The Australian Labor Party this morning announced that it would put $4.5 million towards a grants program to promote, encourage and inspire more Australian girls to learn coding, if it wins power in the upcoming Federal Election.

This morning, Opposition Leader Bill Shorten and two of his parliamentary secretaries, Ed Husic and Terri Butler, attended a Code Club event in Sydney, which has seen the city’s Town Hall taken over by youngsters learning to code. Code Club is a network of coding clubs for Aussie kids aged 9–11.

The three MPs, along with Shadow Minister for Education Kate Ellis said in a statement that for Australia to succeed in the digital economy, the nation needed a workforce of young people with skills in computational thinking and computer science. “To ensure all Australians benefit, we must ensure more young women in particular are inspired to learn to code,” the four MPs said.

According to Labor, Australia will need an extra 100,000 people skilled in ICT by 2020 if the nation is to keep pace with rising demand. However, the party noted that in the last decade, the number of young women starting IT courses at university has fallen dramatically from 1 in 4 to 1 in 10.

@edhusic did you get a good lesson in coding today? Our students are proud to be a part of @CodeClubAus pic.twitter.com/SLA8xM15iK

Labor’s $4.5 million grants program will provide opportunities for girls to experience the creative side of ICT and challenge persistent stereotypes.

Organisations like Code Club Australia, Code Like a Girl, Robogals, Code Camp, Tech Girls Movement, CoderDojo and many others are already working on this area. A Labor Government would build on these programs by making grants of up to $150,000 available for projects run by organisations like these, enabling them to scale up their activities across the country and boost girls’ participation in computational training.

According to Labor, these grants will help facilitate more mentoring and access to role models, networking opportunities, train volunteer teachers and connect coding programs to schools building confidence in girls to take up further study, showcase their talent and immerse young women in technology businesses.

A focus of the program would be to ensure stronger partnerships with schools, skilled professionals as mentors, and tech companies who have shown leadership in this area like Telstra, Westpac, Google, Microsoft and Intel.

According to Labor, the announcement today is the latest in what the party believes is a “comprehensive plan to ensure all Australians benefit from the transition to the digital economy – to secure today’s jobs, tomorrow’s jobs and ensure that no one is left behind”.

Labor has also promised to promote promote the teaching of coding and computational thinking in every primary and secondary school in Australia; Boost the number of young Australians taking up science, technology, engineering and maths (STEM) courses at university as well as upskill 25,000 teachers; Offer a Startup Year at university to young Australians looking to start their own enterprise; And attract the best entrepreneurial talent from around the world and help build Australia’s growing startup economy through two new visa categories.

Labor also plans to get startups to help solve government problems through Challenge Platforms and support startups to compete in government tenders; Generate the skills required for the emerging digital economy now through a National Digital Workforce Plan; Back in great ideas through co-investing in early stage and high potential companies through the $500 million Smart Investment Fund; and improve access to finance for micro-businesses through a partial guarantee scheme, Startup Finance.

Labor said its proposals have been costed by the independent Parliamentary Budget Office.

The party said funding for the policy announced this morning would be offset by existing announcements Labor has made in making sure multinational companies pay their fair share of tax in Australia, reducing superannuation tax concessions and abolishing the Emissions Reduction Fund.

opinion/analysis
A solid announcement by Labor, and part of a string of good tech-related policies the party is coming up with. I support this initiative as announced this morning — we do need to change the culture of technology jobs as being a male-dominated field, and promote it strongly to women. What Labor is promising to do here is a good start.