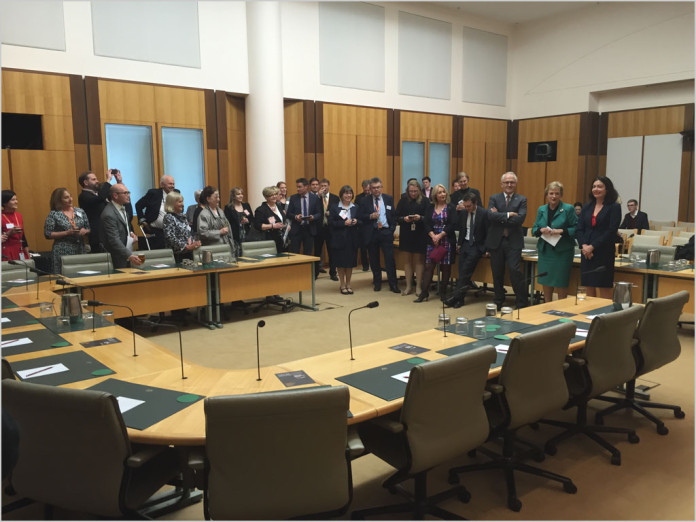 news Politicians from Liberal, Labor and Greens political parties yesterday banded together to launch a cross-party Friends of the Internet group within the Federal Parliament, pledging to support the development, innovation and use of the world’s most ubiquitous technology platform, despite the diverse political views their own parties hold about it.

The Internet is one of the most fraught areas of political discussion currently active in Australia’s political sector. Although most sitting politicians will acknowledge that the platform has brought with it tremendous opportunity and economic benefit, many also have reservations about what they see as its potential disruptive ability and negative impact on society.

For example, the various parties have disagreed bitterly about national telecommunications policy — specifically, the development of the National Broadband Network — over the past decade and beyond. Labor’s proposed mandatory Internet filter was eventually defeated by the Coalition and the Greens, while the Greens furiously attacked the major parties through 2014 and early this year to try and defeat the contentious bipartisan Data Retention legislation.

The stimulus for the foundation of the group came from Internet Australia, the peak body representing Internet users in this country, with Ludlam, Liberal MP Jane Prentice and Labor MP Terri Butler acting as the founding members. It will seek to hold future events in the Parliament.

A large number of related stakeholder organisations — ranging from tech giants such as Huawei to consumer groups such as the Australian Consumer Communications Action Network, advocacy groups such as Electronic Frontiers Australia and the Australian Digital Alliance — also attended, as did MPs from all sides of politics interested in the Internet, including Wyatt Roy, Tim Watts, Senator Jenny McAllister and more.

One notable attendee was former Liberal MP Tony Staley — now 76 — who served as Minister for Post and Telecommunications from 1977 through 1980.

Minister Turnbull took the opportunity to remind the audience of the disruptive power the Internet had had upon virtually every sphere of human endeavour globally.

“The pace of this transformation is quite unprecedented, and it’s the internet which has given it its global reach,” the Minister told the audiece. “We’re living in the most exciting time in human history. The pace of change, which is being ampified by the Internet, is extraordinary.”

Turnbull said the “big dividing line” in the political sector at the moment was not Labor versus Liberal but between those who were “afeared” of the future, and those who embraced it.

“Rupert Murdoch said once that the Internet will destroy more profitable businesses than it will create,” Turnbull added. “I don’t agree with him, [although] it’s probably true as far as his company is concerned — because it is a threat to the established order.”

Shadow Communications Minister Jason Clare said in his electorate in Western Sydney, there were more “eBay millionaires” than anywhere else in the country — creating businesses “that wouldn’t have been able to exist 20 years ago”. “They’re now making a million dollars a year selling their products overseas,” he said.

The Labor MP told the audience that combined, Facebook, Twitter, Google and Amazon had a market capitalisation almost as big as the entire Australian Stock Exchange. “Potentially, that’s the tip of the iceberg,” he said, quoting Internet luminary Vint Cerf, who famously said that 99 percent of the applications for the Internet hadn’t yet been invented.

Clare said the role of a Parliamentary Friendship Group should not be just to have “a few beers and a chat”, but to let policies ferment which could then have a big impact when they became legislation.

For his part, Senator Ludlam said he viewed Parliamentary Friendship Groups as locations where the “political weaponry” could be left at the door, and MPs could come together to test views that they might have in common, rather than those that divided them.

However, the Greens Senator noted that from his point of view, the Internet had needed friends over the past several years, due to the “highly contested and politicised” arguments which had taken place regarding the medium.

In Ludlam’s view, there still exists a generation pf politicians who “don’t fundamentally get the medium”. “It is not just another cash cow, it is not like adding another television channel, and it is not a national security threat which needs to be controlled and shut down if necessary. It is so much more interesting than that,” he said.

Patton called for a range of measures to help Australia take its place as an innovator globally, from fast, ubiquitous broadband to regulatory structures designed to support the development of local industry and the creation of a highly skilled workforce.

He said the Parliamentary Friends Group would provide a platform for education and advice so that our legislators fully understood the “immense value” the Internet had to offer, and the consequences of the legislation that they passed affects how the Internet operates.

The entire event was broadcast live online by Labor MP Terri Butler via Twitter’s Periscope platform — you can watch the replay here. “I will continue to Periscope Jason,” Butler joked at one point as Clare took over the microphone, “and Jason and Malcolm will not Periscope each other.”

I would suggest that a logical next step would be to invite the co-founders of Australian tech company Atlassian to speak at the next event.

Not only are Scott Farquhar and Mike Cannon-Brookes already engaged in the political process — in fact, Farquhar was in Canberra yesterday, lobbying for the PledgeOnePercent initiative — but they lead a technology company which was founded and remains based in Australia, is hugely profitable, and largely provides services over the Internet.
It is precisely this kind of success story which the Parliament needs to see more of, if it is to take technology issues seriously, and the Atlassian guys are very articulate speakers.

I also want to take the time here to praise Patton personally for bringing this huge group of people together for this group’s launch. I have only rarely seen such a large group of ‘who’s who’ in Internet circles brought together in Canberra to speak with one voice to the political sector. What Patton has achieved here — with the support of a number of other organisations — is extraordinary, and he is to be congratulated for his efforts.