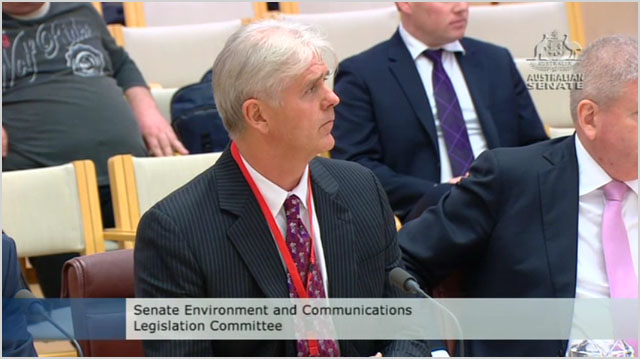 news Bill Morrow has maintained he acted in good faith during his time leading Pacific Gas & Electricity, in a fraught Senate Estimates session in which the Opposition pursued the NBN Co chief executive and another NBN Co staffer, Brad Whitcomb, over a series of tragic accidents at the US utility.

Several weeks ago The Guardian broke the news that Morrow, the executive hand-picked by the new Coalition Government to revamp Labor’s National Broadband Network project in its own image, had been named in a wide-ranging shareholder lawsuit over a series of tragic events at his former employer, Pacific Gas and Electric. The lawsuit relates to, a series of unfortunate accidents throughout 2008 and 2010 in the San Francisco utility’s infrastructure that had tragic consequences; killing a total of nine people and damaging about a hundred homes.

Morrow had a short-lived involvement with PG&E, having served as its president and chief executive for just two years from 2006 through mid-2008, with part of that time as chief operating officer. However, the executive’s tenure at the company came at a critical time; immediately preceding the accidents. And of course, he was rewarded handsomely for his efforts with more than US$8 million in benefits. In addition, Morrow recently appointed to NBN Co another executive who he worked with at PG&E during that period — Brad Whitcomb, NBN Co’s new chief culture and business transformation officer.

In a Senate Estimates hearing late last week, Morrow gave an extensive statement on the issue.

“One things I have learned in my eight weeks in this job is that the CEO of NBN Co is bound to face questions about their suitability for this position,” he said. “In leading one of the world’s most ambitious infrastructure projects funded entirely by the Australian taxpayer, it is to be expected. It is appropriate and I do not shy away from it.”

“The most recent examples of this scrutiny can be seen in the several media articles that have appeared in the past week. They dealt with the two-year period in my career when I worked for a utility company in the United States called Pacific Gas and Electric Company, commonly referred to as PG&E. After I left this company, two incidents occurred in the cities of San Bruno and Rancho Cordova that caused the tragic loss of nine lives. I acknowledged the actions taken by PG in the wake of these tragedies, addressed the issues involved and provided compensation to the families and communities who were affected.”

“The article also mentions former legal action currently underway in the United States that relates to the San Bruno incident. This type of corporate legal proceeding for compensation is what is known in the US as shareholder derivative lawsuits. As the name suggests, they are ordinarily brought about by shareholders and they typically name all the senior officers and directors of the company involved. This case is no exception. The parties that are named in the shareholder actions include virtually every person who was a director or senior officer at PG&E between 1995 through to 2013. My name is one of 20 that were named even though I was only employed by PG&E for two years that began in August 2006 and ran through August 2008.”

“I will continue to vigorously defend the proceedings. I believe that when the legal process runs its course, it will confirm that my fellow directors, officers and I acted with care, in good faith and in the best interests of PG&E at all times. I was upfront about these issues when I spoke to both the board of NBN Co and the government during the recruitment process for the role of CEO. Reference is also made to a US government action against PG&E. No officers or directors of PG&E have been named in that matter. In fact, the company has denied that any PG&E employees knowingly violated any relevant federal law.”

“In the two years that I was at PG&E, the company worked hard to provide customers with safe, reliable and affordable energy. The company significantly increased both gas capital expenditures and spending on gas operations and maintenance. This particular legal process rolls on. As the matters are still before the US courts, which I must respect, I am unable to comment any further other than to make one final important point. I regard safety as paramount. I always have and I continue to do so here at NBN Co. I believe no task is more important than ensuring the safety of workers and the communities that we serve.”

Despite having provided this opening statement, however, former Communications Minister Stephen Conroy relentlessly hounded Morrow over the issue over an extensive period, asking a series of very detailed questions about the issue.

In response, Morrow gave detailed information about his own circumstances and publicly known facts about the PG&E incidents, but repeatedly refused to comment about matters which would have any bearing on the current legal proceedings. He noted that the board of NBN Co and the Cabinet had been aware of the issue when he was appointed.

“I do not want to frustrate you. I would like to be able to provide all the information to you that you are requesting. As this is a matter before the US courts, I must refrain at this point in time,” Morrow said. The NBN Co CEO repeatedly said “No comment” in answer to many questions.

At several points, Government Senators questioned Conroy’s rigorous questioning of Morrow. However, Conroy reminded them that during a similar case involving Morrow’s predecessor Mike Quigley, Coalition Senators questioned Quigley for no less than four hours on one occasion at a Budget Estimates hearing.

The hearings also revealed that Bradley Whitcomb, who held the role of chief strategy and business transformation officer at Vodafone Australia under Morrow’s leadership of that company, and followed the executive to NBN Co, had also worked for PG&E during much the same time that Morrow did, as vice president of marketing and customer innovation.

Conroy pointed out that he had twice requested Whitcomb to attend the parliamentary hearings since he was appointed in April, but the executive had not attended.

“I can assure you, Senator, there are no games being played,” Morrow responded. “He will be before you and the Senate in the future hearings. He has just started with the company. There were several other commitments. The request for his name was fairly late and we could not change his commitment. But, again, I assure you he will be in front of you.”

opinion/analysis
I’ve got a few things to say about what we saw last week regarding Morrow’s appearance before the Senate, and specifically the PG&E issues.

Firstly, it seems clear to me that the allegations in the US case are quite a bit more serious and pressing than we saw in the previous case with respect to Mike Quigley and the US networking vendor Alcatel (as it was during the period of his employment.

Not only is there an active lawsuit against PG&E on this issue, but Morrow has been personally named, and it appears likely that if the case proceeds, that he will be drawn into it to some extent, at least at a superficial level. This may occur due both to his higher level of seniority in the company concerned (he was chief executive), as well as his proximity to the issue in both geography and time. In addition, we must remember that PG&E is a smaller company than Alcatel — concentrated in just one geography. There is also the fact, of course, that people died in the accidents and that many homes were destroyed.

The Quigley case took place in another country in which he had only peripheral involvement; nobody died; the executive was not investigated personally and it took place in a massive global networking machine of which he was only one cog.

Despite this, however (and secondly), the response to this issue has been completely different in Australia. In the Senate last week, Conroy pursued Morrow less vigorously than Turnbull and other Coalition politicians pursued Quigley during his own issues. Morrow did not lose his cool or get emotional during any point of the proceedings.

And of course, we’ve seen almost zero press coverage of the exchange. The Australian didn’t run a massive photo of Morrow looking confused, as it did in the Quigley case. The Financial Review didn’t go big. The News Corp empire of subsidiary publications didn’t make the nation aware of the scandal. There was, in fact, a deafening silence.

What this strongly suggests is that what we’re seeing now is the correct response to the kind of issue facing Bill Morrow — reasoned, rational transparency within the legal boundaries that he is constrained by — and fairly sensible questioning and probing by the Opposition.

The contrast starkly demonstrates that what we saw in the previous Quigley Alcatel case was nothing less than politics — a gross attempt to use a relatively minor issue in the executive’s past to damage the Labor Government, especially in the lead-up period to a Federal Election.

The moderation, and even inattention which has greeted Bill Morrow’s own corporate woes educates us greatly as to the nature of the Murdoch media in Australia and the conservative political class which works so closely with it. The election has been won by the Coalition; hence there is no need to hound the CEO of NBN Co about issues with his past employment. Things have returned largely to normal (or, as normal as things ever get with respect to the NBN).

Personally, I am quite disturbed by the contrast. Both Bill Morrow and Mike Quigley are honourable executives who I respect and who have conducted themselves well at NBN Co under the difficult circumstances they were given. Yet one has been treated more or less with respect by the media and politicians, while the other was the subject of a massive personality attack which attempted to destroy every ounce of his credibility — even when he retired.

Let us be under no illusions about this environment in the future. When it comes to the issue of who it will try to destroy and who it will try to protect, Australia’s mainstream media is playing favourites. We cannot believe everything we read. Most people already know this. But at no time has it been clearer to the technology sector than in the radically different treatment of NBN Co’s successive CEOs. What we saw last week was a proportional response to a legitimate issue. What we saw in the case of Mike Quigley was a politicised witch hunt.