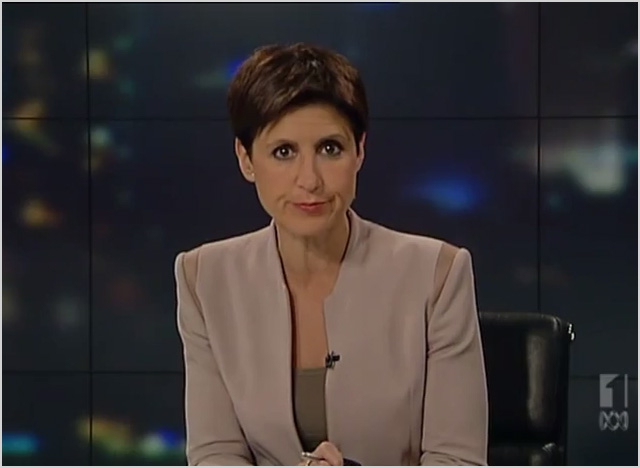 news The ABC delayed publishing an article by Lateline co-host Emma Alberici starkly critical of the Coalition’s rival National Broadband Network policy until after the election, it has emerged, as questions continue to be raised about the public broadcaster’s coverage of Australia’s largest ever infrastructure project.

Despite the controversy, an analysis conducted by Delimiter of the NBN-related coverage of three of the ABC’s top flagship current affairs programs over the past 18 months has found that only one — Lateline — covers the issue regularly or in any detail, while others such as 7:30 and Q&A have almost completely ignored the issue in that period. The issue has been shut down live on air on Q&A several times.

Following the analysis, this week it emerged that the ABC delayed publishing until after the Federal Election last year an article by Lateline co-host Emma Alberici that was sharply critical of the Coalition’s alternative National Broadband Network policy and ended up being one of the broadcaster’s most popular pieces of content on the topic.

The piece, entitled ‘Can the Coalition’s NBN keep pace with change?’ appears to have initially been written in August or early September 2013.

Alberici’s engagement with the two politicians during the debate was highly informed by that research, with the journalist pushing both strongly with respect to their different NBN policies during the debate. It appears that this interest in the NBN topic spilled over into a commentary (opinion/analysis) article which Alberici sought to publish on the ABC’s The Drum site, as senior ABC regularly do. Alberici is a regular contributor to the site.

However, Delimiter understands that when Alberici sought to publish the article, a discussion ensued within the ABC about the piece. It is not clear why the article was delayed, but several sources agree that the ABC delayed publishing the article for a period likely to have been at least a week and perhaps more.

The timing of the publication was sensitive due to the political circumstances at the time. Last year’s Federal Election was held on September 7; a month after the NBN debate on Lateline on 12 August. Alberici’s article was published on the morning of September 9: The Monday morning after the Coalition swept to victory in the Saturday election.

Delimiter asked a spokesperson from the ABC whether they could confirm that the article’s publication was delayed, and to comment on why the delay took place. The spokesperson sent a broader statement responding to issues raised about the ABC’s NBN coverage in general (which will be published in full on Monday), but did not specifically address the question about Alberici’s article.

The article, when published, was severely critical of the Coalition’s rival NBN policy, with Alberici unfavourably comparing the Coalition’s FTTN focus to technically superior FTTP deployments in cities such as Chattanooga in Tennessee. The Lateline co-host wrote:

“The question the Coalition will need to answer now they’ve taken Government is whether digital innovation will be moving faster than Australia’s capacity, through their cut-price NBN infrastructure, to benefit from it … Mr Turnbull is adamant that it’s “very unlikely” Australians will need 1 gigabit of download speeds. That’s what they said about the World Wide Web.”

It was received very favourably by the ABC’s audience, with 562 comments published, many of which supported Alberici’s views. NBN articles in general tend to receive a great deal of audience attention when published on the Drum; several articles published by the author of this article in March and April 2013 received 537 and 432 comments respectively, indicating strong audience interest on the topic. Alberici also received strong support for the article on social media.

The unusual timing of the article was noted at the time by some readers. “Good article, but why wait til after the election?” wrote one Twitter user.

In addition, Alberici personally continues to express criticism of the Coalition’s NBN approach. On 14 April this year, the Lateline co-host wrote on her Twitter account that Turnbull had said gigabit broadband speeds were “more than anyone would need”. “How can you be so sure?” she asked, referring to the Chattanooga example. Also in April this year, Alberici tweeted that she was working on a segment on the NBN for the ABC’s 702 Local Radio station in Sydney.

Delimiter’s analysis of Lateline’s NBN-related coverage over the past 18 months has shown that the show covers the NBN issue much more extensively and in what appears to be a more balanced fashion, than some of the other flagship current affairs shows at the ABC. 7:30, for example, has not covered the NBN as a specific topic yet in 2014, and ignored the topic in 2013 in seven out of twelve months in 2013. Coverage of the NBN topic during other months by 7:30 was typically largely limited to major announcements regarding the project, or Coalition criticism of Labor’s administration of the project.

In comparison, over the past 18 months, Lateline has covered the issue much more frequently and has covered criticism of the Coalition’s unpopular NBN alternative policy in significantly greater depth.

However, there have also been questions raised about Lateline’s coverage of the issue. On 10 April this year, NBN Co announced that it had turfed at least three key executives at the company after just one week of new chief executive Bill Morrow being in his role, with long-time and respected NBN Co head of corporate and commercial Kevin Brown, chief financial officer Robin Payne and chief technology officer Gary McLaren to leave NBN Co.

That night, host Tony Jones hosted a lengthy interview with Turnbull on Lateline. Jones strongly pushed Turnbull on a range of issues associated with the NBN — including the issue of whether rival telcos such as TPG should be allowed to overbuild the NBN network and the drastically watered down speeds possible under the Coalition’s version of the project.

However, Jones commenced the interview by asking about unrelated issues such as the release of the diaries of former NSW Premier and Foreign Minister Bob Carr, as well as proposed changes to the Racial Discrimination Act. In addition, Jones did not ask Turnbull about the executives who had lost their roles at NBN Co.

Throughout 2013 Jones held several other interviews with Turnbull on Lateline in which he pressured the Member for Wentworth on the NBN issue.

However, it does not appear as though Jones was similarly active in interviewing figures from the other major side of politics — Labor — with co-host Alberici appearing to conduct most of the interviews or debates in that period which involved Labor politicians critical of the Coalition’s policy such as Senator Stephen Conroy (Communications Minister for much of 2013), his successor Anthony Albanese and Labor MP Ed Husic, who also retains a strong interest in the NBN and technology issues.

The news comes as it appears that other journalists at the ABC interested in the NBN issue have changed the way they cover the issue.

In general, the only other ABC journalist to have regularly covered criticisms of the Coalition’s NBN policy over the past several years has been Nick Ross, the Editor of the broadcaster’s Technology + Games site.

Ross’s articles in 2012 and 2013 had been very positively received by Australia’s technology sector, in a media environment in which few journalists have challenged disputed claims the Coalition has made regarding the NBN. In addition, other media outlets had started to use Ross’s work as a basis for investigating the differences between the two policies.

However, subsequent to his publication of several such articles, in mid-2012 Ross was attacked heavily on the issue by Turnbull, who accused the journalist of creating “relentless propaganda” to support Labor’s NBN project. Ross was also strongly attacked for the coverage by The Australian newspaper, which was sharply critical of Labor’s NBN project while Labor was in Government.

The ABC’s own Media Watch investigated Ross’ coverage in March 2013, largely vindicating Ross’s approach (with a few caveats). Host Jonathan Holmes found that Ross, using his expertise and specialist knowledge of the NBN topic, had delivered analysis grounded in reporting work, using hundreds of reports and other sources; and had no political affiliations to weigh him down. In addition, he noted that mainstream media outlets such as The Australian Financial Review and The Australian newspapers had taken a broadly negative approach to the NBN; in contrast, he noted strong ABC reader support for Ross’s work.

However, since the Media Watch episode investigating his NBN articles, Ross has largely ceased covering the NBN project in the lengthy analysis style he had been using previously. It is not clear why.

One of the only other ABC journalists to regularly raise the issue of the NBN over the past several years has been Jake Sturmer, who from February through December 2013 was the broadcaster’s national science and technology reporter.

During his time in the role, Sturmer published a number of articles examining issues such as doubts over whether Telstra’s copper network could meet the needs of the Coalition’s rival NBN policy. Sturmer also covered NBN Co’s Strategic Review and its conclusion that the Coalition’s election policy of delivering 25Mbps broadband to all Australians by the end of 2016 was unrealistic.

However, it appears as though Sturmer was reassigned in January this year, as his LinkedIn profile now states he is the ABC’s national environment and science reporter. The journalist still reports for many of the same outlets — ABC News, 7:30, Lateline and the AM and PM radio shows — but his beat no longer explicitly covers technology, and Sturmer has largely ceased covering the NBN project.

Due to Sturmer’s role change, Delimiter asked the ABC this week whether it currently employed any journalists dedicated to covering the technology area. “Nick Ross is the ABC’s technology editor, a respected and dedicated journalist in this area,” the outlet responded.

Image credit: Screenshot of Emma Alberici from Lateline, believed to be covered under fair dealing provisions