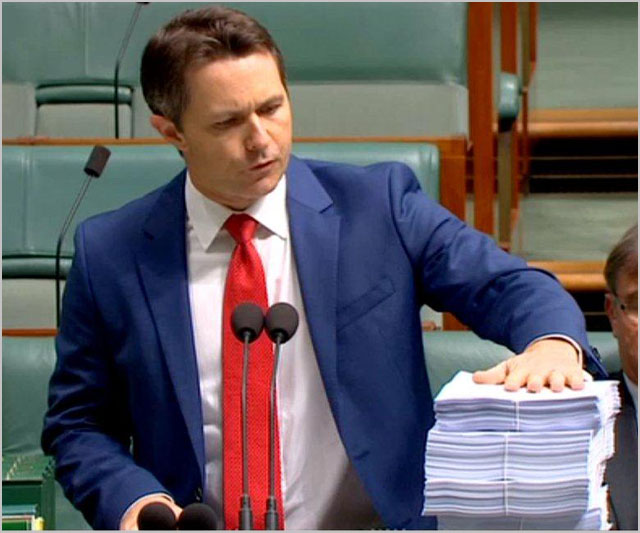 news Shadow Minister for Communications Jason Clare yesterday presented to Federal Parliament the signatures of 272,000 Australians who want the new Coalition Government to build Labor’s all-fibre version of the National Broadband Network instead of the technically inferior version which is currently being proposed.

Since the Coalition won power in September, a vigorous popular social movement focused on getting the new Abbott administration to abandon its own broadband policy and support Labor’s more ambitious National Broadband Network vision has been gaining force. Supporters of Labor’s vision argue that it will serve Australia’s long-term interests much better, as it features an all-fibre NBN, delivering a more reliable network and faster speeds.

Telecommunications industry experts have consistently stated that they believe Labor’s NBN policy to be highly technically superior to the Coalition’s more modest vision based on using Fibre to the Node and HFC cable delivery mechanisms, as well as having the potential to deliver Australia superior long-term outcomes in terms of service delivery and boosting Australia’s economy through productivity gains.

A petition placed on popular website Change.org on the issue following the election, demanding the Coalition reconsider the FTTN technology and focus on the superior FTTP option, has garnered in excess of 272,000 signatures, with tens of thousands more Australians putting their names to the issue every day.

Yesterday, Shadow Communications Minister Jason Clare tabled in Parliament a full copy of the 272,000 signatures on that petition (see photo above).

A statement issued by the Labor MP said that before the election, the Liberal Party promised to build a second rate broadband network – a pale imitation of Labor’s National Broadband Network. “Now they are not even doing that,” it added, referring to the fact that the Coalition’s broadband policy appears to have changed substantially since the election, including the re-use of the HFC cable networks operated by Telstra and Optus for up to a third of Australian premises.

“The NBN is effectively dead. The Liberal Party is not building a National Broadband Network. They are building a series of different networks with different speeds, different capacities and different technologies,” Clare said. “Malcolm Turnbull calls his model the MTM – the Multi Technology Model. I suspect MTM will end up standing for Malcolm Turnbull’s Mess.”

“What kind of broadband you get is pot luck. It’s a lucky dip.”