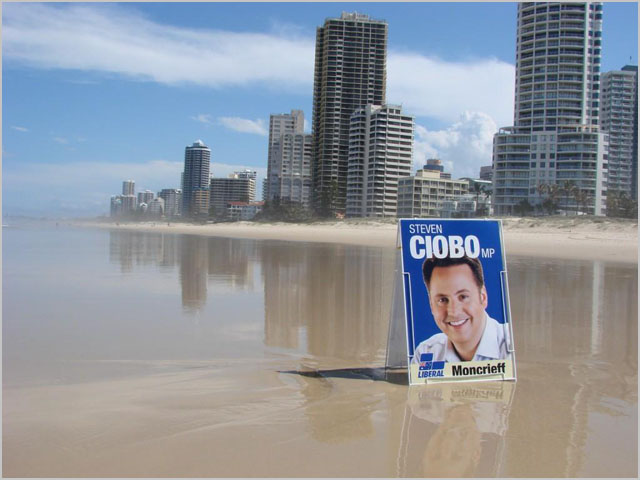 news A Queensland Liberal MP who has been described as a “Malcolm Turnbull lieutenant” and a long-time critic of Labor’s popular National Broadband Network has made a number of inaccurate statements in Federal Parliament about the project, claiming it could be matched by 4G and 5G mobile networks without spending “some $90 billion of taxpayers’ money”.

Steve Ciobo, who has held the seat of Moncrief in Queensland since 2001, was previously the tourism, arts, youth and sports spokesperson for the Opposition, but was demoted to the backbench in September 2010 by Opposition Leader Tony Abbott. At the time, a columnist for The Australia, Peter Van Onselen, speculated that Ciobo was “a Malcolm Turnbull lieutenant”. He is currently Parliamentary Secretary to Treasurer Joe Hockey.

Ciobo has been a long-time critic of Labor’s NBN project, but has not always gotten his facts right with regard to the project. In June 2013, for example, the MP wrote a controversial letter to his constituents making a number of false claims about the project, including the false claim that the Coalition’s version could be completed “six years earlier”.

Speaking in Parliament on Tuesday this week, Ciobo made a number of inaccurate allegations about Labor’s NBN policy.

“We remember the NBN because originally it was going to be about an $8 billion exercise to provide high-speed broadband. Then that was scaled up to being about $14 billion or $15 billion and then we saw projections of $29 billion,” Ciobo said.

Ciobo added: “We understand, when you look at the costs of Labor’s rollout — how slow it was, how many targets were missed, how many inefficiencies were built into the system, how many disputes there were with contractors — that we saw the actual cost of Labor’s NBN rollout forecast to reach over $90 billion. I see in recent media reports that Telstra on their 4G wireless communications network are providing speeds of — you guessed it — 100 gigabytes.”

Labor MP and former Telstra employee Tim Watts interjected to Ciobo’s speech, stating: “You’re rewriting the laws of physics!” In addition, a member of the Coalition also corrected Ciobo, claiming that the correct term was “megabytes”. However, what appeared to be a different member of the Coalition was then forced to correct that initial correction, noting, correctly, that the appropriate term for measuring broadband speed was ‘megabits’.

“I have not rewritten the laws of physics at all, actually,” Ciobo continued. “The reality is that, when it comes to commercially viable opportunities, there are download speeds the private sector provides on wireless communications today that are comparable with what Labor wanted to do with over $90 billion of taxpayers’ funds. So we see forecasts as well that predict under 4G and possibly the 5G network that is currently in the R&D stage download speeds of up to one gigabyte and not at a cost of some $90 billion of taxpayers’ funds. This is just another example of the way in which Labor was recklessly spending people’s money.”

In actual fact, Labor’s initial NBN project was costed at $4.3 billion in November 2007 for a national Fibre to the Node-style rollout, and then increased to $43 billion when it was expanded in April 2009 to a technically superior Fibre to the Premises build. In December, NBN Co’s Strategic Review produced under the Coalition estimated that Labor’s version of the NBN could be completed for about $54 billion — only $15 billion more than the Coalition’s technically inferior version. Both versions are slated to make a financial return for the Government, however — meaning that neither would ultimately cost the Government anything.

Ciobo’s claim that 4G and 5G mobile broadband networks could provide an alternative to the fixed optic-fibre networks utilised under either version of the NBN has some basis in truth.

Technology vendor Samsung, for instance, has already tested 5G mobile speeds of up to 1Gbps in its home country of Korea, demonstrating similar peak speed capabilities to those possible on Labor’s FTTP-based NBN policy. Similar trials are underway in Japan, and in Australia, Telstra has tested 4G speeds up to 300Mbps. In Australia, the 4G mobile networks of Telstra, Optus and Vodafone already deliver speeds comparable at least to ADSL broadband.

However, these speeds are also contingent on several factors. Mobile networks are a ‘shared’ medium, meaning that not all users connected to a mobile tower would be able to achieve those speeds, and the more connections take place, the slower the speeds will be. In addition, these speeds are expected to be severely limited in commercial usage by the limited availability of wireless spectrum, which is already constraining the growth of 4G networks in Australia.

In the same session of Parliament, Communications Minister Malcolm Turnbull was also active. Turnbull broadly attacked the previous Labor Government’s stewardship of its NBN project, which he described as “utterly catastrophic”.

Turnbull repeated several inaccurate claims which the Liberal MP has repeatedly also made in public over the past several weeks. “If Labor had been allowed to continue the project on their plans, Australians would have had to pay up to 80 per cent more of the already high prices in order to pay for what would have been a $73 billion project—$30 billion more than they
told Australians it would cost,” he said. Unfortunately, there is little evidence for Turnbull’s claims, as detailed in NBN Co’s Strategic Review, and based on NBN Co’s wholesale pricing model, which is fixed for a certain time and then linked to inflation.

It appears that Shadow Deputy Communications Minister Michelle Rowland and Member for Perth Alannah MacTiernan tried to interject and correct Turnbull. However, the Speaker did not allow the interjections.

opinion/analysis
Wow, haven’t seen the “wireless will kill the NBN” claim for a while. Quite amusing that Ciobo attempted to roll that one out. I imagine Tim Watts must have had a chuckle to himself about that.