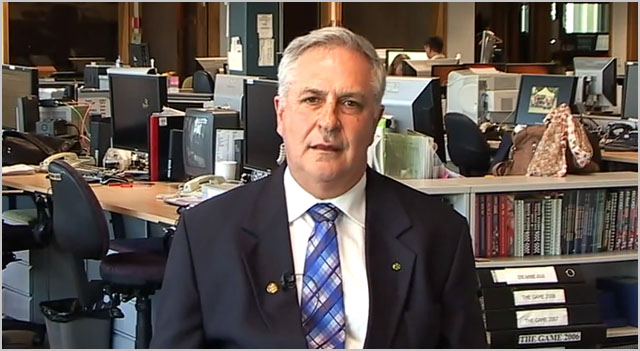 news A Liberal Member of Parliament inaccurately claimed this week on national television that Telstra would launch a 12Mbps wireless broadband service which would “surpass” the National Broadband Network’s 100Mbps fibre to the home service, meaning there was no need to proceed with a project he said was a “white elephant”.

The ABC’s Capital Hill program on Wednesday ran an extensive debate between Liberal MP Don Randall and Labor MP Mike Kelly on the NBN, following the Government’s release of NBN Co’s new corporate plan to cover the years until 2015. You can view the full clip on YouTube here or on the ABC’s website. And thanks to Terry Green for first highlighting this issue on his blog.

Speaking on the program, Randall said “Telstra will beat the NBN at their own game” with competitive wireless broadband infrastructure. “Thanks to the $11 billion the NBN’s giving Telstra, they are rolling out wireless, at a cheaper cost, 12 megabits per second, to people in outer areas of Australia,” said Randall.

“In greenfields estates, in my electorate, people are readily signing on, because they get the upload and download speeds. The one technology, fibre to the home, which the NBN has come up with in this case, is going to be gazumped by Telstra, and this NBN will eventually be seen as the white elephant which it is, because Telstra will have surpassed it by offering a cheaper and just as efficient service.”

Kelly immediately rejected Randall’s claims, stating that they “completely misrepresented” the NBN scheme. “You cannot do things for business, education and health based on a wireless system; it will not work,” he said, additionally pointing out that under the deals Telstra and Optus have signed with NBN Co, both companies will also be transferring their fixed-line customers onto the NBN infrastructure. “12 megabytes a second is plenty,” fired back Randall.

Randall’s claim that Telstra is rolling out a 12Mbps wireless service is factually incorrect. The company already has a nationwide 3G/4G network which features a diverse range of speeds; up to 40Mbps in 4G areas, up to 20Mbps in metropolitan areas and many regional areas outside the 4G footprint, and lesser speeds outside that footprint. However, Telstra has never specifically discussed a 12Mbps wireless service.

However even real-world 4G networks such as the 4G component of Telstra’s Next G network, which is one of the leading 4G networks globally, have shown real-world download speeds so far limited to around 35Mbps, in testing by Delimiter and other media outlets.

It is possible that Randall, in his comments, was confusing NBN Co’s fixed wireless service, which is being rolled out in a number of non-fibre locations nationwide, for Telstra’s mobile broadband service. The fixed broadband service is slated to deliver speeds of 12Mbps to end users. However, it will also not have the capacity to surpass the main fibre to the home NBN and is only being deployed in areas where it is not economic to roll out fibre.

Randall also made a number of other controversial statements regarding the NBN, alleging, for example, that “no-one wants to sign on” to the network where it has been rolled out, “because it’s too dear”.

In fact, only a few short months after the NBN’s fibre was rolled out in rural communities such as Kiama in NSW and Willunga in South Australia, some 25 percent of local residents and businesses had already adopted the service. As the NBN is replacing Telstra’s fibre, that figure is expected to skyrocket over time as the previous generation of services is turned off. In addition, current NBN prices are directly comparable to current ADSL or HFC broadband services, with some companies such as Optus merely porting their old broadband prices directly across to the new network — meaning Randall’s claim that the NBN prices are too dear is questionable.

Kelly told Capital Hill the NBN was an infrastructure project larger than the Snowy Mountains Hydro-Electric scheme, and that it would eventually pay for itself as well as returning a seven percent return on the Government’s investment in it, and that the health, education and business applications to be unlocked by the NBN would particularly affect rural and regional areas.

opinion/analysis
Watching the debate between Randall and Kelly on the ABC’s Capital Hill program this week was quite amusing, I have to say. I’m not saying that everything Labor does is gold — because it’s absolutely not (hello, data retention scheme and mandatory Internet filter) — but Kelly clearly and succinctly outlined the benefits of the NBN in a way which really made sense to me, and I think Labor should adopt more widely. In comparison, Randall merely blithely repeated all of the common myths about the NBN promulgated by conservative interests. It was a very interesting study in contrasts.

To be honest, I thought the interview style really highlighted a weakness of the media right now, in that although Kelly was basically speaking the truth and Randall basically misleading the public, you wouldn’t necessarily know it from listening to either, unless you had pre-existing knowledge of the situation like I do. You’d just see two opposing points of view, both probably having some validity. I don’t think the ABC interviewer did enough to challenge Randall on his obviously inaccurate statements, and I think that’s something journalists need to do more with respect to public policy debates at the moment.

Image credit: Screenshot of ABC’s Capital Hill program, believed to be covered under fair use