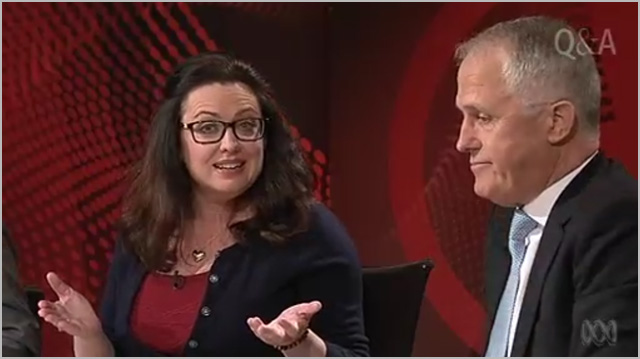 news The Australian Broadcasting Corporation has denied it censored the National Broadband Network issue from being discussed on its flagship panel discussion program Q&A this week due to any arrangement with Communications Minister Malcolm Turnbull, stating that it merely ran out of time to air a question on the topic.

Q&A is a talkshow-style program which airs on the national broadcaster on most Monday nights. It is typically hosted by high-profile ABC journalist Tony Jones and features five guests, running for an hour. The show has achieved popularity, as similar shows such as the BBC’s Question Time have done in other jurisdictions, courtesy of the level of direct audience interaction. Typically the show’s host takes live questions from the studio audience, as well as questions submitted before the show via the Internet, and displays a live Twitter feed of comments from those viewing the show live.

However, the show has gradually attracted criticism since it was launched in mid-2008 for what some have seen as its preference for repeatedly inviting certain politicians from the two major sides of Australian politics — Labor and the Coalition, while giving lesser preference to commentators from non-political or media professional backgrounds, or from smaller political or advocacy organisations. Liberal MPs Christopher Pyne and Malcolm Turnbull, as well as Labor figures Tanya Plibersek and Bill Shorten, have particularly been noted as repeat guests who represent entrenched political positions.

Monday night’s Q&A episode (available in full online) spurred a higher degree of normal interest from Australia’s technology community ahead of its on air date, due to the participation of both Communications Minister Malcolm Turnbull as well as controversial commentator, playwright and novelist Van Badham (pictured above), who has emerged as a critic of the Coalition’s radical reshaping of Labor’s NBN project.

Analysis of the questions submitted to the show before the episode went to air and published online on the ABC’s site showed that as a consequence of the two panellists’ participation, Q&A was inundated with at least many dozens of questions regarding the NBN as a topic, in both text and video form. However, the show’s producers ignored the flood of questions from viewers prior to the filming, leaving the issue completely out of pre-show briefing documents. Host Tony Jones actively shut down Badham’s attempts to raise the issue with Turnbull on air, despite audience applause when the commentator did so.

It has also emerged that a large slice of the audience for the Q&A episode last night had actually consisted of Liberal Party members, in the form of the Sydney University Liberal Club, which organised a mass excursion to the event. The club’s Facebook page has published a photo of what appears to be several dozen members, with Turnbull featured at the centre, as well as an earlier photo of the group with British journalist and broadcaster Andrew Neil, also a panellist this week.

In Opposition, Turnbull regularly criticised the ABC for what he believed was a stance the organisation had taken in favour of the flagship Labor project. The news also comes as the Coalition Federal Government has also been reported to be considering cuts to the ABC’s budget, with senior figures such as Prime Minister Tony Abbott severely criticising the broadcaster on coverage other issues such as the treatment of asylum seekers.

In the wake of the show’s airing, Delimiter invited the ABC to comment in response to a number of questions, including whether Turnbull’s office had, made it a condition of appearing on Q&A or similarly high-profile shows such as Lateline and 7:30 over the past 12 months that the NBN topic not be a featured topic; and whether any internal editorial policy existed (formal or informal) that specifically guided editorial coverage of the NBN.

Delimiter also invited the ABC to comment on why pre-show briefing material distributed to the presenters and the studio audience did not include the topic of the NBN, despite confirmation of the Communications Minister appearing as a host, despite the fact that fellow panelist Badham had publicly flagged the topic as being of interest during her appearance on the same episode, and the fact of the extensive questions submitted by the audience.

In addition, Delimiter invited the broadcaster to comment on whether it believed the coverage allocated to the NBN project over the past 12 months by its flagship talkshow, current affairs and news programs had been adequate, given the importance of the project as Australia’s largest ever infrastructure endeavour.

In response, the ABC issued an extensive statement addressing all four questions.
“As with all ABC programs, Q&A does not make any agreements with on-air talent about topics that can or cannot be discussed and all issues or topics are covered by the ABC subject to long-standing editorial policies and codes of ethics,” the broadcaster said.

“There are many issues and topics on the national agenda at present given how close the federal government is to releasing its first budget. Q&A tries to cover as much of the national debate as it can in the one hour it goes to air. Not all topics can be covered, regardless of the wishes of some panellists.”

“This week concerns about the budget, government spending and taxation dominated the questions submitted to the program and so those issues were given priority. There were few NBN questions from the studio audience but a significant number of video questions on that topic. A video question was selected for use in the program but unfortunately we ran out of time before the question could be used. The NBN has been discussed on Q&A and answered by Malcolm Turnbull in past programs and no doubt will be discussed again in the future.”

“ABC news and current affairs programs have offered comprehensive coverage of the NBN as it has done with all issues on the national agenda.”

The ABC’s approach to the NBN issue on this week’s episode of Q&A has caused something of a social media storm for the broadcaster, with hundreds of Twitter users re-tweeting Delimiter’s article on the subject, including through the show’s #qanda hashtag, and 1,500 people liking Delimiter’s article on the subject on Facebook. The broadcaster is also facing criticism on the issue on the show’s Facebook page.

Image credit: Screenshot of this week’s Q&A program on the ABC, believed to be OK to use under Australian fair dealing provisions