news A new comprehensive study of public attitudes towards Labor’s National Broadband Network project has found the initiative still enjoys very high levels of widespread public support from ordinary Australians, despite what the study described as an “overwhelmingly negative” approach to the project by print media such as newspapers.

The study, entitled Framing the NBN: Public perceptions and media representations, was published this month by the University of Melbourne’s Institute for a Broadband-Enabled Society (IBES). It is available online in PDF format.

The study is composed of several different parts. Firstly, the researchers involved conducted a national online survey of some 2,180 Australians undertaken in March 2013. Secondly, they conducted twenty five interviews with various household types to gain a deeper qualitative understanding of the how NBN was understood by Australians. And lastly, it conducted a large sampling of mainstream press coverage in two Australian newspapers — The Australian and The Age. Some 1,060 articles were examined which were published from 1 July 2008 to 1 July 2013.

With respect to the media survey, the study found that in the first two years of the sample, the NBN was predominantly discussed in terms of whether it should exist or not. Debates then shifted to the technical configuration of the project, and then more recently, onto delays with the rollout.

However, across both newspapers, there were “comparatively few articles focusing on the positive aspects and possible larger societal benefits of the network (10 articles or 0.94 percent of coverage), or on the applications that may be supported by the NBN (including health, arts, education) (12 articles, or 1.13 percent)”.

“Given the transformative potential of high speed broadband for so many aspects of Australian life, it is remarkable that across the coverage of the NBN in The Australian and The Age newspapers, there are so few articles focusing on the likely applications of the NBN, the implications of these applications for various economic sectors and social groups, and so little debate and discussion of possible economic, societal and cultural benefits of the network,” the study’s authors wrote.

In addition, in general, print media representations of the NBN project were generally negative.

“The NBN has attracted considerable media coverage over the last 5 years, and whilst the research findings do not reveal any particular agenda being pursued, they do show that the sentiment in the print media representations of the NBN was overwhelmingly negative,” the study noted.

In contrast, ordinary Australians were very positive in their attitudes towards the NBN, according to the study.

In addition to asking about overall or general views of the NBN, the study also asked survey respondents whether they though the NBN would be of benefit to them personally, asking ‘Do you expect that the NBN will have benefits for you?’ 58 percent thought the NBN would be personally beneficial (providing ‘positive’ or ‘very positive’ responses), whilst 26% thought it wouldn’t be, and 15% were neutral.

In addition, the study found there were no real demographic differences between Australians who supported the NBN and those who didn’t.

“Surprisingly there was no statistically significant variation in responses amongst the various demographics,” the study wrote. “For example, separating postcode into urban and rural was expected to produce some difference in attitude to the NBN, but there was no real variation in the respective frequency distributions on that variable, nor on all the other demographic variables.”

The analysis also considered whether political affiliation would produce any difference in attitudes to the NBN, by asking ‘Which party did you vote for in the 2010 election?’ Respondents who voted for the Liberal and/or National Parties at the 2010 election had a more negative opinion of the NBN than Australian Labor Party (ALP) voters, with ALP voters twice as likely as Liberal voters to hold very positive opinions on the NBN.

However, NBN support amongst Liberal voters was still very strong, with 48 percent of that voting base supporting the project. 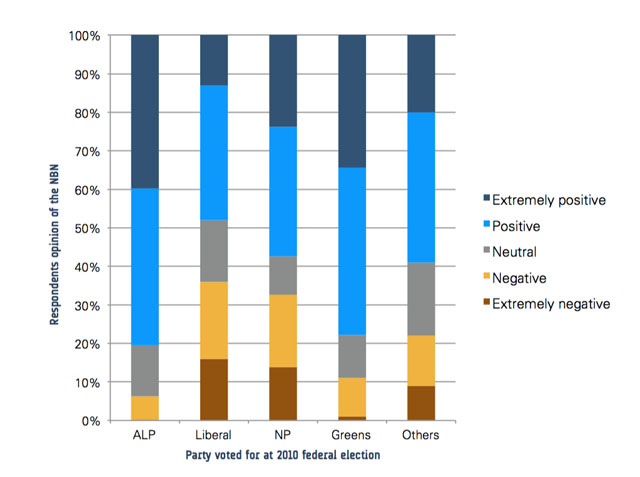 opinion/analysis
Surprise, surprise! Most Australians continue to support Labor’s NBN vision, despite the fact that Australia’s mainstream media has been staunchly against the project almost from day one. How can these newspapers and the journalists who work for them claim to be serving the Australian public when they consistently advocate against the public’s interest? I don’t quite understand. But then, that in itself may be part of why I work for an independent online media outlet and not a giant newspaper (any more).