news The ABC’s flagship panel discussion program Q&A last night appeared to actively censor the National Broadband Network issue from being discussed on an episode featuring Communications Minister Malcolm Turnbull; ignoring a flood of questions from viewers prior to its filming, leaving the issue out of pre-show briefing documents and shutting down discussion on air.

Q&A is a talkshow-style program which airs on the national broadcaster on most Monday nights. It is typically hosted by high-profile ABC journalist Tony Jones and features five guests, running for an hour. The show has achieved popularity, as similar shows such as the BBC’s Question Time have done in other jurisdictions, courtesy of the level of direct audience interaction. Typically the show’s host takes live questions from the studio audience, as well as questions submitted before the show via the Internet, and displays a live Twitter feed of comments from those viewing the show live.

However, the show has gradually attracted criticism since it was launched in mid-2008 for what some have seen as its preference for repeatedly inviting certain politicians from the two major sides of Australian politics — Labor and the Coalition, while giving lesser preference to commentators from non-political or media professional backgrounds, or from smaller political or advocacy organisations. Liberal MPs Christopher Pyne and Malcolm Turnbull, as well as Labor figures Tanya Plibersek and Bill Shorten, have particularly been noted as repeat guests who represent entrenched political positions.

Last night’s episode (available in full online) spurred a higher degree of normal interest from Australia’s technology community ahead of its on air date, due to the participation of both Communications Minister Malcolm Turnbull as well as controversial commentator, playwright and novelist Van Badham (pictured above).

The two figures could be said to be on opposite sides of Australia’s ongoing broadband policy debate. As Communications Minister, Turnbull is engaged in dramatically reshaping Labor’s National Broadband Network project, in a move which will deliver most Australians technically inferior broadband connections to the universal fibre option they were promised under the previous Labor Government.

In recent months Van Badham has emerged as a critic of the changes, linking them in an article for The Guardian in mid-February to the continued dominance of Foxtel over Australia’s paid television market. Foxtel is a joint venture between Telstra and News Corp Australia. Many newspapers owned by News Corp, especially the Daily Telegraph and The Australian, campaigned strongly for the Coalition during last year’s Federal Election.

Analysis of the questions submitted to the show before the episode went to air and published online on the ABC’s site showed that as a consequence of the two panellists’ participation, Q&A was inundated with at least many dozens of questions regarding the NBN as a topic, in both text and video form. It is unclear how many NBN-related questions in total were submitted, but it is clear that the issue was one of the most popular ones one in the pre-show questions submitted, with a list of the most recent 200 questions submitted up until yesterday midday showing some 48 mentions of the term “NBN”. A number of video questions were also submitted discussing the NBN.

The majority of the NBN questions heavily criticised Turnbull for the Coalition’s radical overhaul of the project.

“Malcolm Turnbull. You have given the go-ahead to a mixed NBN rollout without waiting for the Vertigan cost/benefit analysis, after your harsh criticism of Labor over this,” wrote one Q&A viewer. “Why build a significantly inferior broadband network, described as a dog’s breakfast, which fails to separate Telstra, and which [NBN Co chairman Ziggy Switkowski] has admitted may need upgrading in as little as 5 years, when it is unlikely to be significantly cheaper in the long term. How can you possibly equate this with Australia’s national interest?”

“Mr Turnbull, how do you and your party live with yourselves, considering the fact that you have effectively destroyed what would have been the best telecommunications network in the world?” wrote another. “ABC, I dare you to air this. We need accountability from this government.”

However, the show did not choose to air any of the NBN questions, instead choosing to focus on the Federal Budget, taxation issues, ABC funding, media ownership, free speech rights and the Joint Strike Fighter program. Turnbull repeatedly stated during the program that he found it difficult to comment on many of the issues, as he was not the relevant Cabinet Minister.

In addition, pre-show briefing materials distributed to panellists and attendees before last night’s episode of Q&A also contained no mention of the NBN. One brief communication on Monday focused only on a small number of issues such as taxation, online abuse on social media sites and criticism by technology giant Google of surveillance practices.

“Van Badham publishes commentary on Twitter that many would find offensive and attracts numerous nasty trolls,” the email from Q&A’s producers wrote. “Is cyber-assault the new frontier of abuse of women or is it a case of playing with fire?”

A more extensive briefing went into a great deal of detail on a number of other issues, including the budget, free speech rights, media industry change and regulation, the influence of News Ltd proprietor Rupert Murdoch, climate change, the recent tour by British royalty of Australia and even Malcolm Turnbull’s history as a lawyer defending a former MI5 agent in the 1980’s Spycatcher case.

Other panelists last night included Labor Senator Doug Cameron and British journalist and broadcaster Andrew Neil. “One of the biggest issues in Britain today,” the briefing noted, “is the forthcoming Scottish independence referendum, due to be held in September. If the pro-independence forces are successful, the ramifications for Scotland and the rest of Great Britain will be enormous. Both Doug Cameron and Andrew Neil are proud of their Scots heritage. Do they think an independent Scotland can prosper? And how will the rest of what we currently call the United Kingdom fare?”

However, this lengthy and detailed briefing also appeared not to contain any mention of the NBN.

On the show itself last night, host Tony Jones explicitly shut down several discussions of the NBN which Van Badham attempted to initiate with Turnbull. During a discussion relating to taxation and the Howard administration’s history of financial management, Van Badham said:

“I seem to remember the privatisation of Telstra, and the sale of rather a lot of government assets, so let’s not talk about ‘we were totally in the black’. We sold off major pieces of infrastructure, that this country needs to be prosperous in the future, which is a wonderful way of perhaps talking about the NBN; and one of the problems we’re having with the NBN is since the privatisation of Telstra — used to fill up the government coffers — that we are behind on maintenance, that we are behind the technology required …”

Host Tony Jones responded: “You know what, I’m going to pause you on the NBN, because we’ll come back to that subject later.” However, Jones did not return to the subject.

During a later discussion about the Federal Government’s recent $24 billion purchase of 58 Joint Strike Fighters to bolster Australia’s military assets, Turnbull responded to criticism about the purchase by stating that the JSF fighters were “the latest” and “the best” in that category of fighter jet that Australia could buy.

The comment was met with applause from the audience, but Turnbull responded that Van Badham’s claim was “complete wrong about the NBN”. “It’s not wrong at all. We know that it’s not wrong, Malcolm,” Van Badham fired back.

Despite the byplay between the two panellists on the NBN issue, Jones again immediately switched the topic to a different panellist, noting that the JSF purchase had been supported by both major sides of politics and asking Sarrah Le Marquand, opinion editor for News Ltd newspaper The Daily Telegraph, about her opinion on the ABC’s Australia Network regional program.

This morning it emerged that a large slice of the audience for last night’s Q&A episode last night had actually consisted of Liberal Party members, in the form of the Sydney University Liberal Club, which organised a mass excursion to the event. The club’s Facebook page has published a photo of what appears to be several dozen members, with Turnbull featured at the centre. 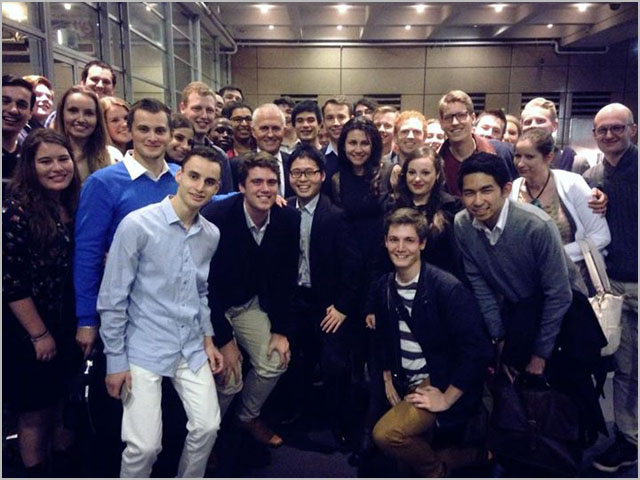 In addition, the Sydney University Liberal Club also has a relationship with one of the other panellists on last night’s show — UK journalist and broadcaster Andrew Neil. The club published a separate photo last week of a number of its members meeting with Neil following an interview the journalist conducted with Federal Treasurer Joe Hockey. 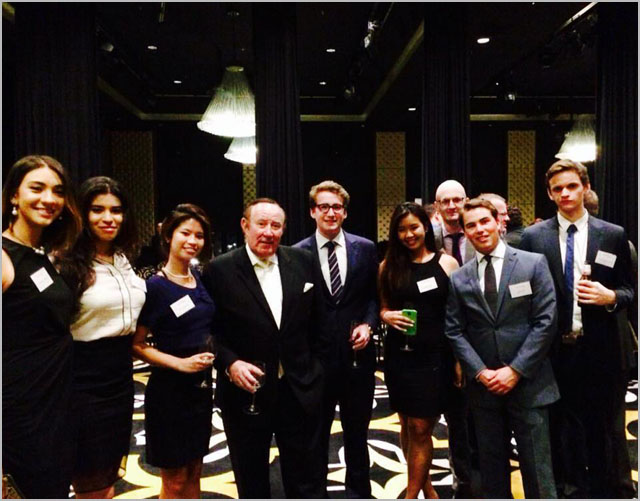 Q&A’s approach to the NBN issue last night generated a degree of controversy on social media both last night and this morning. “Almost like they went out of their way to change topic. Van tried, but got shot down,” wrote one commenter. “Host appeared to be acting on instructions to shut any NBN discussion down,” wrote another.

In Opposition, Turnbull regularly criticised the ABC for what he believed was a stance the organisation had taken in favour of the flagship Labor project. In July 2012 the then-Shadow Minister accused the national broadcaster of creating “relentless propaganda” to support the NBN, in a stance which Turnbull described as “embarrassing”.

And in November of that year, Turnbull again hit out at the reporting of the NBN debate by the ABC, accusing the broadcaster of “superficial, misleading and unbalanced reporting” of the issue and detailing a litany of complaints about the ABC’s Lateline program specifically, which Tony Jones hosts.

Similar comments made by the Member for Wentworth in March 2013 led to journalists raising questions at a press conference as to whether Turnbull’s behaviour towards specific ABC journalists constituted ‘bullying’ them with respect to the NBN issue.

The news also comes as the Coalition Federal Government has also been reported to be considering cuts to the ABC’s budget, with reports focusing on the potential introduction of a so-called “efficiency dividend” which would require a small annual cut to the broadcaster’s funding, bringing it in line with regular practice at some government departments.

Delimiter has invited the ABC to respond to a number of questions relating to its coverage of the NBN. These include the issues of whether the office of Communications Minister Malcolm Turnbull had made it a condition of appearing on Q&A or other shows that the NBN not be featured as a topic; why pre-show briefing material distributed to the presenters and audience did not include any mention of the NBN, and whether any internal editorial policy existed that specifically guided editorial coverage of the NBN.

This morning Van Badham was unapologetic for bringing up the NBN several times on last night’s Q&A show. “I will keep bringing up the NBN until this country has the infrastructure it deserves,” the commentator wrote on Twitter under the #qanda hashtag.

Image credit: Screenshot of last night’s Q&A program on the ABC, Sydney University Liberal Club; both believed to be OK to use under Australian fair dealing provisions