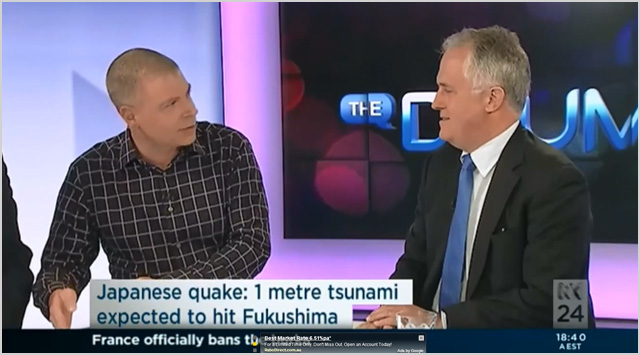 news Shadow Communications Minister Malcolm Turnbull has again hit out at the reporting of the National Broadband Network debate by the Australian Broadcasting Corporation, accusing the broadcaster of “superficial, misleading and unbalanced reporting” of the issue and detailing a litany of complaints about the ABC’s Lateline program specifically.

This week Lateline ran an extended segment on the NBN, firstly giving viewers an update on the project’s rollout as it currently stands and the differing opinions regarding Labor’s policy and the Coalition’s rival approach, which would focus on re-using infrastructure and deploying fibre to the node technology around Australia, rather than the fibre to the home infrastructure which Labor is deploying. The segment was followed by a live debate between Turnbull and Communications Minister Stephen Conroy.

However, in a follow-up article published on his website after the broadcast, and also published in brief in The Australian newspaper, Turnbull claimed the ABC had done a shoddy job of examining the issue.

“The National Broadband Network is a complicated issue. But that is no excuse for superficial, misleading or unbalanced reporting of it,” Turnbull wrote on his site. “Yet on Tuesday November 27 ABC’s Lateline ran a segment about the NBN ahead of a discussion between myself and Senator Conroy that was all of the above. Lateline missed the point of the debate over broadband policy, preferring to reinforce the Government’s false but seductively simple claim: Labor is ushering us into the digital future, while the Coalition is holding us back.”

Turnbull said the ABC should have been exploring three key questions. Firstly, he said, the broadcaster should have explored what the time and cost differences were between the rollout of Labor’s FTTH NBN model and the Coalition’s alternative FTTN model. “Which is faster and cheaper to build?” the Liberal MP asked. Secondly, Turnbull said the ABC should have examined what speeds the two competing technologies could deliver, and lastly, it should have examined what broadband speeds were required to deliver applications consumers wanted to use over their broadband connection and were prepared to pay for. However, Turnbull said, the ABC ignored these issues.

The Member for Wentworth additionally blasted the broadcaster for failing to use its international resources in countries such as the US and UK to investigate similar rollouts to Australia’s NBN in those countries.

“The Brits speak English and the ABC has an office in London so given the salience of this issue in the Australian debate it is hard to understand why the ABC hasn’t bothered to interview the folk at BT and report on their experience,” Turnbull said, referring to BT’s rollout in the UK, which focuses on using FTTN technology to upgrade its national copper network, as well as extending that FTTN network in some areas using FTTH.”

“Likewise, AT&T has used FTTN for its US wireline upgrade – passing 30 million households,” Turnbull said. “Verizon on the other hard did build an FTTP network, but has stopped expanding it because of the huge costs. An interesting and highly relevant contrast worth some journalistic investigation. Americans, too, speak English and the ABC has an office in Washington – so these facts wouldn’t be hard to find out.”

“And across the border in Canada, the cable company, Rogers, has expanded its HFC network (originally built to deliver pay television) so that it can deliver 100 mbps broadband as well as voice and TV. Thats pretty interesting given the regular assertions in the Australian technical media that HFC is out of date and fit only for the technology dustbin. They speak English in Canada too, so that might be a good place to check out.”

Turnbull also criticised the ABC for not interviewing industry leaders or experts supporting the Coalition’s case in its broadcast; and instead using commentators such as analyst Paul Budde, who broadly supports the NBN.

“Many areas of public policy are complex, and the media’s task of explaining them simply and clearly is not easy,” said Turnbull. “But that is no excuse for a lack of basic research and balance. And most puzzling of all, why does our national broadcaster, with its global network of reporters and bureaus, have so little curiosity in what other comparable countries are doing with their broadband upgrade programs.”

It’s not the first time that Turnbull has heavily criticised Australia’s media – especially the ABC – for what he believes is a lack of balance and fairness in the reporting of the NBN.

Last week, for example, Turnbull dismissed as “nonsense” claims published by the ABC by contracting companies deploying Labor’s National Broadband Network project that changing the project’s model to a fibre to the node rollout would be “an expensive, time-consuming hindrance”. And the week before, Turnbull similarly heavily criticised Australia’s technology media for what he described as its “cheerleader” approach to the NBN, saying the nation was “let down by the so-called technology media” as it did not examine local events closely enough with reference to the global telecommunications sector.

In July, ABC Technology & Games editor Nick Ross – who has taken a broadly positive stance towards the NBN in his articles on it — and Turnbull engaged in a very public argument on the subject of the NBN on social networking platform Twitter. “Your relentless NBN propaganda is an embarrassment to the ABC,” Turnbull told Ross. “Do you really work for the ABC or is it the NBN Co?”

In turn, Ross in particular highlighted what he said were weaknesses in the Coalitions’ NBN policy, especially its focus on using a fibre to the node-style of broadband rollout rather than the fibre to the home approach Labor is currently taking. “I work for the Australian public. You haven’t ever acknowledged health, [education], business, upload speed requirements for NBN,” Ross told Turnbull. “Am more than happy to meet up and discuss this. We seem to think the NBN is for very different purposes.”

Turnbull has also been vocal over the past several weeks in criticising Australia’s technology press in general. Several weeks ago he said in a speech to the Innovation Bay startup networking organisation in Sydney that Australia’s technology press had a “cheerleader” approach to the NBN, adding that the nation was “let down by the so-called technology media” as it did not examine local events closely enough with reference to the global telecommunications sector.

opinion/analysis
Reading Turnbull’s comments today and over the past several weeks, I can;t help but get the feeling that the Shadow Communications Minister wants the media, particularly the ABC, to do his job for him. This is perhaps understandable for a politician who is himself a former journalist; but it doesn’t reflect the way the world works. If Turnbull wants to demonstrate that the Coalition’s FTTN policy is better than Labor’s FTTH policy, then he needs to do a better job of it himself; and then media coverage will reflect that.

Pretty basic questions, aren’t they? Maybe when Turnbull does answer these questions, we can have a real debate and stop these complaints from the Member for Wentworth about a media which is more than willing to listen to anything Turnbull – with his sky-high public profile and electorate popularity – has to say.