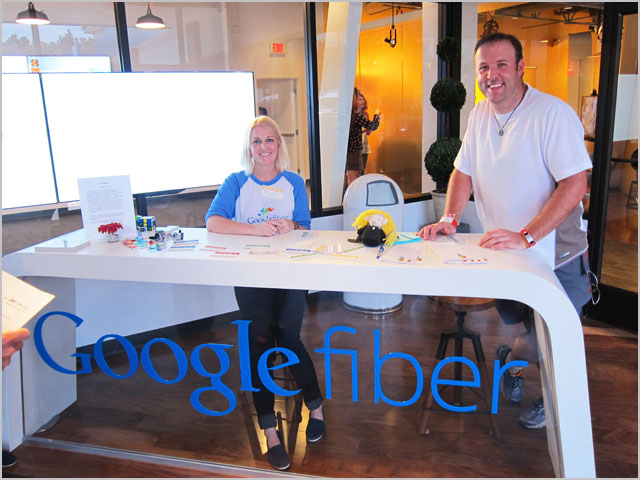 news Search giant Google has revealed it is planning to upgrade its residential-grade Google Fiber broadband network in the United States to 10Gbps; news that comes as Communications Minister Malcolm Turnbull has stated that it is “difficult, if not impossible” to find uses for a broadband service with speeds up to 1Gbps — ten times less.

Google Fiber is a broadband network which Google is rolling out in several cities in the US, such as Kansas City, Missouri, as well as Austin, Texas, and Provo, Utah. The service is based on the same Fibre to the Premises model which Labor preferred for its National Broadband Network project, but offers significantly better prices, including unlimited plans for $70 per month for 1Gbps plans with no download quotas. The network, however, does not allow competitive wholesale access by other ISPs.

According to USA Today, Google chief financial officer Patrick Pichette told a Goldman Sachs conference last week that the company was already working on speeds much higher than those currently available. The site reported (we recommend you click here for the full article) that Pichette called this the next generation of the Internet. Faster speeds will increase the use of software as a service applications such as the ones sold by Google because users will be able to trust that critical applications that are data intensive will run smoothly over the Internet, he reportedly said.

“That’s where the world is going. It’s going to happen,” Pichette said. It may happen over a decade, but “why wouldn’t we make it available in three years? That’s what we’re working on. There’s no need to wait,” he added. The CFO also added that Google was set to add more locations to its list for Google Fiber.

The news comes as debate in Australia continues to exist around the need for higher speeds. Labor’s previous National Broadband Network plan would have offered similar speeds to Google Fiber, and it is likely it would have been able to be upgraded to 10Gbps speeds, similar to Google Fiber, in the long term.

However, that model was largely thrown out of the window in December, when NBN Co published its wide-ranging Strategic Review. Using this document, the new Coalition Federal Government appears to be pursuing a so-called “Multi-Technology Mix” model for deploying the Coalition’s Broadband Network initiative. The model will only see Labor’s preferred FTTP model deployed to some 26 percent of the majority of the population, Fibre to the Node used for 44 percent, and the existing HFC cable networks owned by Telstra and Optus extended to cover the rest.

“Fibre offers the capacity for much higher speeds but it depends what plan the customer buys. The most popular plan on the NBN is currently the 12/1mbps plan,” the Communications Minister wrote. “If a business wants speeds higher than is available over VDSL, such as 1gbps, there are available products such as fibre on demand, to allow that access. Speeds of 100/40 mbps are being achieved on hybrid fibre copper connections of the kind proposed in the Strategic Review.”

“An important point which is overlooked is that increased line speed is only of utility or value to a consumer to the extent it enables them to do something they couldn’t otherwise do. So while fibre can provide a speed of 1 gbps, it is difficult, if not impossible, to identify the applications or services of value to residential consumers that would require it.”

“A second point worth remembering is that the NBN is a last mile customer access network – it connects a customer to the local point of interconnection (PoI) after which connectivity to the rest of the Internet is carried by the customer’s retail service provider. So even if there is a very high speed available between the customer’s premises and the PoI that does not necessarily mean connections between servers in other towns, states or countries will be at that speed because of contention and congestion elsewhere in the Internet.”

However, Turnbull’s comments are believed to be out of step with the telecommunications industry globally. Although technologies such as FTTN and HFC cable are viewed as viable broadband technologies in the short to medium term, in the long-term industry consensus holds that almost all fixed-line networks will trend towards fibre, to cater for extremely rapidly growing bandwidth demands.

Such infrastructure already exists throughout much of Asia, particularly South Korea and Japan, and neighbouring countries to Australia such as Singapore and New Zealand are deploying FTTP rather than FTTN or HFC cable technologies. In November last year, in another example, The City of Los Angeles revealed plans to embark on a massive Fibre to the Premises city-wide deployment of fibre broadband, in a model that may deliver gigabit broadband speeds to the city’s 3.5 million residents and all businesses and vault it into the next-generation of technology enablement.

A number of other surveys conducted over the past 2-3 years have consistently shown strong support for the NBN project amongst Australians, and even Coalition voters. In addition, last week Shadow Communications Minister Jason Clare tabled a petition in Parliament with the signatures of some 272,000 Australians calling for the Coalition to support Labor’s FTTP model.

opinion/analysis
Wow. 10Gbps for residential use. That’s awesome! It will be great when these kinds of services are available in a more widespread manner. The applications that would be possible at that point would be limitless.