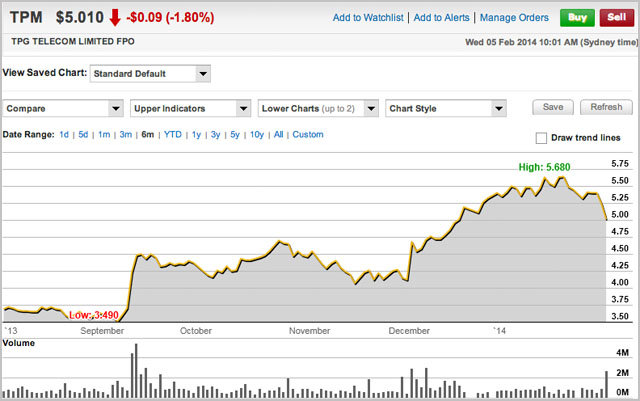 news A statement made yesterday by Communications Minister Malcolm Turnbull which appeared to have undercut the stability of Australia’s telecommunications regulatory environment has had a dramatic impact on the share price of national broadband provider TPG, with the company’s stock taking a steep dive yesterday.

In September last year, national broadband company TPG flagged plans to deploy so-called fibre to the basement infrastructure to some 500,000 apartments in major Australian capital cities, in a move which will compete directly with the new Coalition Government’s plans to conduct similar rollouts under the Coalition’s Broadband Network (CBN) scheme. The move was shortly followed by a similar announcement by Optus, which is examining its own fibre infrastructure to determine whether it may conduct a similar FTTB rollout to TPG.

However, in comments made to the Financial Review yesterday morning (we recommend you click here for the full article), Communications Minister Malcolm Turnbull appeared to have called the legality of both rollouts into question. “It’s yet to be seen how much scope they’ve got for that,” the Minister reportedly said, adding that the issue would be examined by the Panel of Experts conducting a cost/benefit analysis of broadband and associated regulation.

The comments throw both potential rollouts — likely representing investments worth at the least, tens of millions of dollars — into jeopardy, as they open the door for new legislation to stop the rollouts from going ahead, even if they are already partway through. The Coalition’s initial broadband policy stated that the cost/benefit study was due to be delivered within six months, meaning that it is not likely to be finalised before mid-2014, given that the Panel of Experts was appointed in mid-December.

At the start of trading yesterday, TPG’s share price was $5.35. By this morning, it had sunk to $5.01, a drop of 6.8 percent. Part of the drop could be attributable to wider falls in the sharemarket yesterday, but other telcos such as Telstra and iiNet were not affected to the same extent, signalling that TPG’s share price fall was more closely linked to Turnbull’s comments rather than to the wider index fall.

Turnbull’s comments come despite the fact that the Minister Malcolm Turnbull has repeatedly stated that he is in favour of infrastructure-based competition in Australia’s broadband environment — even in competition with the Coalition’s Broadband Network. Both network rollouts would be likely to provide infrastructure-based competition with the Coalition’s Broadband Network when it was eventually constructed, and hence undercut the finances of NBN Co in some regions.

“Infrastructure-based competition is the norm around the world because it drives investment, encourages innovation and keeps prices lower,” a frequently asked questions document about the Coalition’s broadband policy states.

It appears that this situation with regulatory uncertainty caused by Australia’s political sphere has happened previously with regards to Australia’s telecommunications industry. Internode founder Simon Hackett, for example, had publicly stated in September 2011 that if the Coalition won the 2013 Federal Election and cancelled Labor’s FTTP-based National Broadband Network project, then Internode could have listed on the Australian Stock Exchange and deployed its own fibre infrastructure further, in a similar vein as TPG and Optus are proposing.

opinion/analysis
In September last year, after the Coalition won the Federal Election, Tony Abbott declared Australia “open for business”, pledging to create a competent, trustworthy Government with “no surprises”. Well, I think it’s safe to say that that promise has been blown out of the water.

What we’re seeing here is very clear. The fundamental function of governments is to ensure internal and external security, while providing stable underpinnings for the economy and the national legal framework. In making these comments yesterday, Minister Turnbull has severely undercut the stability of Australia’s telecommunications regulatory environment, leaving an ill-defined time period that has frozen important investment decisions worth tens, perhaps hundreds of millions of dollars; decisions that would result in better broadband, built by the private sector, for hundreds of thousands of Australians.

And the stockmarket has reacted predictably, cutting a premium off TPG’s share price due to the reduced growth prospects which Minister Turnbull has enforced on the telco.

This is precisely the opposite of what a Crown Minister should be doing. Ministers should be concerned with setting long-term, stable regulatory frameworks. Yet Minister Turnbull seems unaware that his flippant comments can quickly cause real financial damage to companies, investors and a delay in better services to consumers.

It’s pretty clear that Labor failed to deliver its NBN policy in a timely manner; Labor has its own degree of incompetence and poor management to account for. However, at least since April 2009 the telco market has largely known what to expect from the Government, even if it didn’t end up delivering it. With the Coalition, things seem to be changing every day in unpredictable ways. And that’s not a recipe for economic growth or better services.

Furthermore, we are now in the ludicrous situation where a Coalition Government — the side of politics that is supposed to be staunchly pro-private sector — is actively blocking tens, perhaps hundreds of millions of dollars of investment in the telecommunications sector. That’s not a good look for Turnbull and his colleagues.