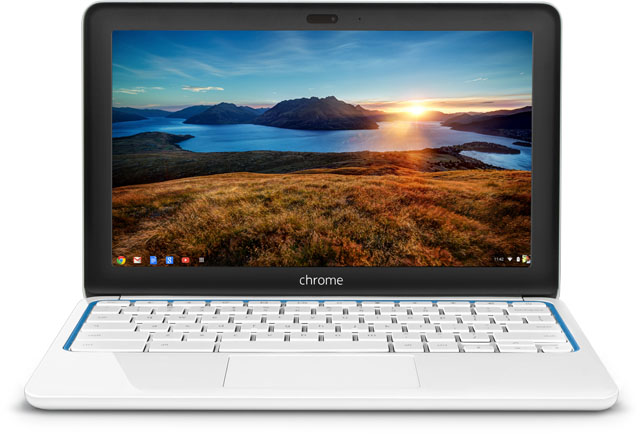 news Technology giant Google this morning announced it had started selling HP’s Chrome OS-based Chromebook 11 laptop in Australia through its Play Store as well as select JB Hi-Fi and Harvey Norman stores, with the low-priced laptop going for a recommended retail price of $399.

Google vice preside of Product Management Caesar Sengupta this morning published a blog post on the company’s Australian blog noting that the HP Chromebook 11 is available for $399 from select JB Hi-Fi and Harvey Norman stores. It can also be purchased online through Google’s Play Store. The AU$399 pricetag is more expensive than the model’s US$279 (AU$313) price in the US.

“Many of us use the new year as an opportunity for a fresh start. We decide to eat better, exercise more, or kick some bad habits. If you decided to get your computing life in order in 2014, this is one resolution you can actually keep — with a Chromebook,” wrote Sengupta.

“Unlike traditional computers, Chromebooks are always running the latest, most secure software. Updates happen seamlessly and automatically, without nagging reminders, so you don’t have to click a finger. Now Aussies have even more Chromebook choices with the launch of the HP Chromebook 11. Built in partnership with our friends at HP, the HP Chromebook 11 is the perfect computer for the way that people work and live today.”

“Light and portable, the HP Chromebook 11 fits easily into a bag or purse and with more than six hours of battery life it can keep up with you all day. Sleek and simple, the HP Chromebook 11 has a full-size keyboard and there are no sharp edges, so nothing digs into your wrists while you type. Powered by a micro-USB charger, you can also use this to juice up your Android phone or tablet.”

Reviews of the HP Chromebook 11 have been mixed. The Verge gave the device only 5.9 out of 10, noting that although it was certain to sell well, its other advantages were muted:

“But the only truly compelling thing is the price. Without a touchscreen, or a better display, or better battery life, the Chromebook 11 doesn’t make a great case against tablets like the Nexus 10 or the iPad. And without more power and better performance, it’s really hard to recommend to anyone as their primary laptop. One day a laptop running Chrome OS will easily replace a low-end Windows notebook, but it won’t be the Chromebook 11.”

Engadget was more positive, giving the HP Chromebook 11 a rating of 72/100, noting that if buyers could look past the inherent limitations of Chromebooks and Google’s limited Chrome OS operating system, then the HP Chromebook 11 was “worthy of a place on your comparison-shopping list”. The site added: “It’s up to you to determine what your needs are, but if you know what you’re getting, you’ll enjoy the HP Chromebook 11.”