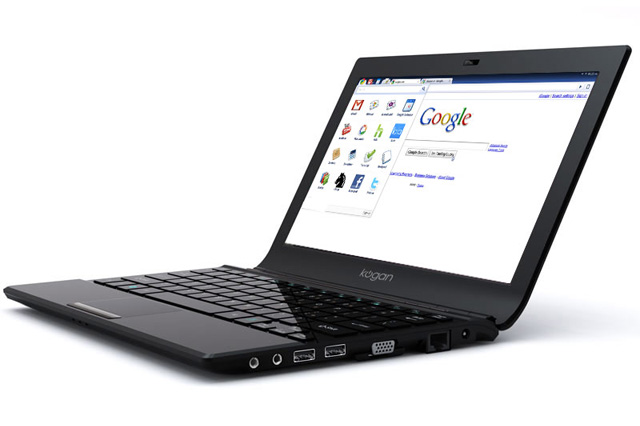 Maverick consumer electronics manufacturer Kogan has once again stolen a march on his big global rivals; launching a laptop in Australia running the open source version of Google’s Chrome OS before companies like Samsung and Acer have brought their products to market.

Last month, Google revealed in the US that it had signed up the two Asian electronics giants as foundation partners to sell laptops with the Chrome OS platform. At the time, both would only confirm their products were slated to his Australia in the second half of 2011.

Unlike traditional laptops or even the lighter, smaller breed of netbooks, the so-called ‘Chromebooks’ are designed to be constantly used with the internet — with data and even most applications to be stored online and used through modern cloud computing techniques — as opposed to run from the machines’ hard drive. Chrome OS itself is based on the open source Linux operating system. Google is also offering enterprise pricing for the devices on a rental model.

However, today, Kogan started shipping a laptop similar to that which the larger manufacturers will sell — but based on the open source Chromium version of Google’s platform. This story appears to have been broken by the iTech Report.

The device will be sold at a similar price point — $349 — as the larger companies’ products, with Kogan’s site billing it as a “world first” launch. It will feature quite modest specifications — a 1.3GHz Intel Celeron CPU, 1GB of DDR2 RAM, a 30GB SATA SSD hard disk and a 11.6″ screen which can do a resolution up to 1366 by 768. Battery life on the device will be about 3.5 hours.

Kogan’s site touts the speed of the new laptop, as well as its convenience, claiming that it takes just five seconds to boot the machine, and that with all documents stored in the cloud, if you lose the device, you can log in on another one and “get right back to work”.

According to the Chromium OS web site, while the project shares the same code base with the commercial Chrome OS software, the official version has a number of “additional firmware features” such as ‘verified boot’ and ‘easy recovery’, which require corresponding hardware changes and consequently don’t work in Chromium OS builds. In addition, the laptops running Chrome OS are specially optimised for the operation system and so would see “enhanced performance and security”. Chromium OS also does not feature an auto-update mechanism.

It’s not the first time Kogan has experimented with selling devices based on open source platforms, including Linux. In April this year, for example, the company launched a tablet based on the Android platform, also from Google, in addition to a netbook based on Ubuntu Linux.

Opinions are divided as to whether Chrome OS will become a mainstream platform as Google’s Android system has for mobile phones, or whether it will remain a niche offering. Since Google first outed the new operating system in 2009, the laptop market has changed dramatically, with much of the global interest in netbook devices being subsumed into the burgeoning tablet market let by Apple’s iPad.