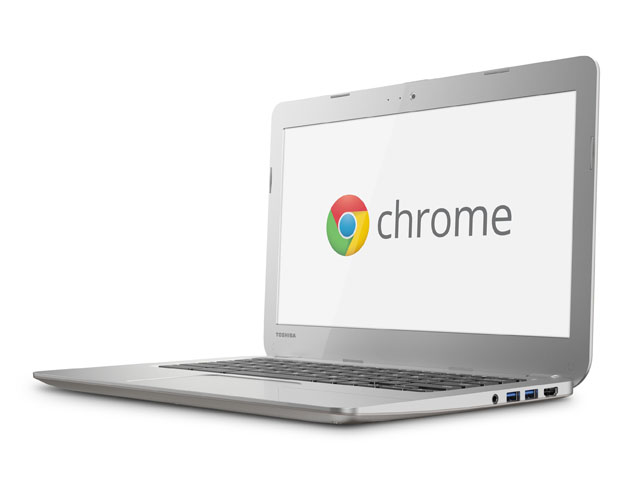 in brief Japanese electronics giant Toshiba has announced its Chromebook laptops are available in Australia. Announced at CES 2014 in Las Vegas earlier this month, the devices ship with a 13.3″ display and run Google’s Chrome OS operating system. Australian recommended retail price will be $399. The company’s media release:

At CES 2014 in Las Vegas, Toshiba revealed the Toshiba Chromebook – the first Chromebook with a 13.3-inch diagonal HD display and today it is available in Australia and New Zealand. Optimised for productivity, affordable and easy-to-use; the Toshiba Chromebook is the ideal companion for students and home users featuring a Haswell-based Intel® Dual Core processor enabling up to nine hours of battery life.

“We are excited to deliver an ultraportable, stylish everyday cloud companion, that is engineered for fast cloud computing, at a very happy price,” said Anthony Geronimo, product marketing manager, Toshiba ISD. “The Toshiba Chromebook is sleek, slim and durable. It has a premium finish and is packed with Toshiba’s essential features.”

The Toshiba Chromebook is built on the Chrome OS – an operating system that has multiple layers of security, cloud storage, and the most popular Google products built-in. The Toshiba Chromebook boots up at lightning speed and with up to nine hours of battery life helps you stay productive all day. The Chrome OS allows fast page loads, secure computing and easy syncing across all your devices – PCs, smartphones and tablets.

Additionally, the Toshiba Chromebook also brings you the best of Google, with features including Gmail, YouTube and Google Maps built-in. There are also tens of thousands of other free apps which you can downloaded easily from the Chrome Web Store.

This Chromebook also features notebook connectivity essentials including an on-board HD webcam, two lightning-fast USB 3.0 ports, HDMI® for big-screen connectivity, SD Card slot and inbuilt Wi-Fi™. The Toshiba Chromebook weighs in at 1.5 kg, has a slim 2.02 cm profile and sports a sleek premium finish. This durable device also comes with 100GB of Google Drive Cloud Storage for 2 years. The Toshiba Chromebook will be available at all major retailers and online via the mytoshiba.com.au website from today for RRP of $399 AUD/ $479 NZD.