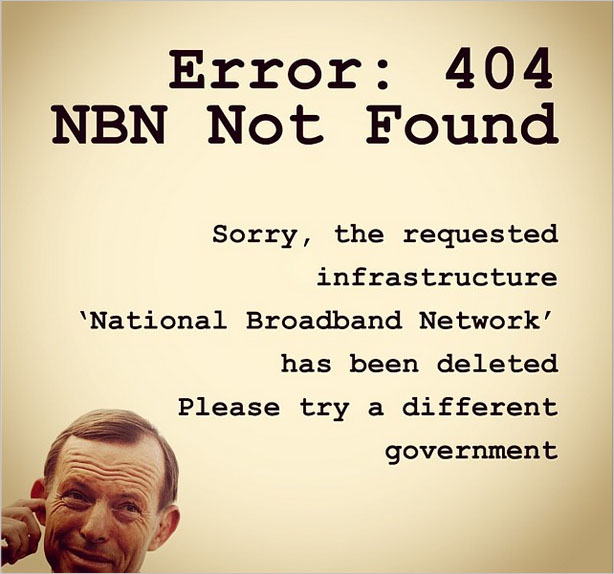 The report found that it will not be possible to deliver the Coalition’s stated policy goal of delivering broadband speeds of 25Mbps to all Australians by the end of 2016 or at the projected cost, and has recommended that NBN Co cancel any new network rollout to up to a third of Australian premises already covered by existing HFC cable networks. It also recommended that a sizable proportion of the remaining premises would be covered by a Fibre to the Node rollout, with about a quarter of premises to received the original Fibre to the Premises model preferred by the previous Labor administration. This model is known as the ‘Multi-Technology Mix’ option.

The development of this model, with its reliance on technologies inferior to Labor’s previous Fibre to the Premises model has come despite the fact that even senior NBN Co executives have acknowledged that some of the technology featured in the MTM model will need upgrading in only a few year’s time. Fundamental fixed-line telecommunications infrastructure is typically deployed with the intention that it will last for decades.

The model has attracted significant criticism, even from commentators which had previously been broadly positive about the Coalition’s policy. Telecommunications analyst Paul Budde has described the MTM model as a “dog’s breakfast” which would be hard to implement, and ISP iiNet has described the debate on the issue as lacking long-term vision.

“I see the Greens’ role as to salvaging as much as possible from the wreckage by maximising the amount of optic fiber laid directly to premises. I strongly encourage people to make their concerns heard directly with their Liberal and National MPs,” said Ludlam in a statement issued yesterday to coincide with a visit of the Senate’s NBN Committee to Western Australia.

“There is no reason why WA has to miss out and be subjected to broadband dropouts just because the Abbott Government doesn’t have the foresight to install a world class telecommunications network.”

Scott Ludlam said people across the state would be stranded on the obsolete copper telephone network under the current plan advanced by Prime Minister Tony Abbott and Communications Minister Malcolm Turnbull.

“Farmers, regional architects, designers and software developers in WA could have been conducting business with people across the world with fast broadband,” the Greens Senator said. “But huge sections of the metro area suffer sub-standard telecommunications, and Abbott’s solution is to pull the plug.”

Ludlam said that after the 2010 election, then-opposition leader Abbott instructed Turnbull to “demolish” the NBN, which resulted in the current plan to buy and then maintain Telstra’s patched and outdated copper network. In an earlier hearing, Ludlam said the committee was shown evidence of the degree to which copper cables are spliced together with duct tape and plastic bags.

However, the Senator’s implication — that the network is not capable of providing high-speed broadband services — is incorrect. Across Europe and throughout the United States, copper networks, in a Fibre to the Node model, are being used to provide high-speed broadband. news British incumbent telco BT revealed in July, for example, that its fibre to the node network has passed more than 16 million premises since the network rollout was commenced in 2009, with more than 1.7 million customers having signed up for active connections to the infrastructure.

However, the proposed re-use of the HFC cable networks of Telstra and Optus — a model which was not contained in the Coalition’s initial broadband policy released last April — is seen as a larger issue for the MTM model. The networks are currently owned by Telstra and Optus, and it is not clear how or at what price NBN Co would buy the networks or gain access to them. In addition, it is not clear whether it is technically possible for such networks to be opened for wholesale access. This model is very rare globally.

Globally, the standard upgrade path for national broadband networks currently involves the split of incumbent telcos’ retail and wholesale operations, followed by government efforts to incentivise the wholesale divisions to upgrade their networks. This is the model being pursued in countries such as New Zealand and the UK, and similar models are being used throughout other countries in Europe.