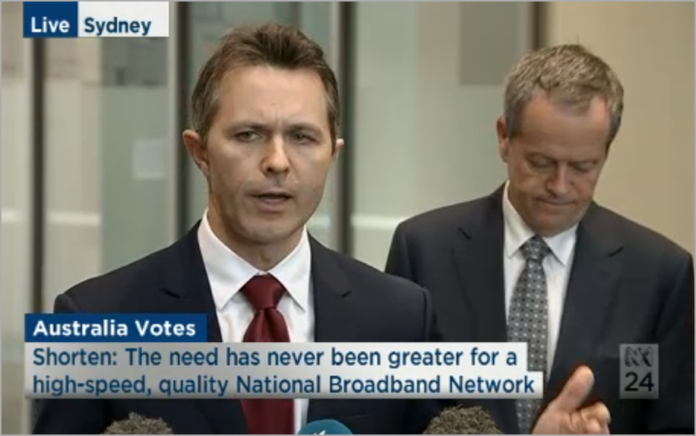 news Labor still has an interest in upgrading the NBN company’s HFC cable networks to full Fibre to the Premises technology, Delimiter can confirm, with this issue to be considered as part of the Infrastructure Review outlined as part of Labor’s new NBN policy today.

In its policy announcement, Labor noted that the party’s platform would see a Labor Government commission Infrastructure Australia and to conduct a review of those premises, to “manage the development of a plan that outlines how and when the parts of Australia left with Mr Turnbull’s second- rate NBN should be transitioned to fibre-to-the-premises.”

However, the policy document did not make clear whether this Infrastructure Australia review would consider the future of the HFC cable networks rolled out by the NBN company, or merely the Fibre to the Node networks.

Speaking in Sydney this morning at a press conference broadcast live by the ABC, Opposition Leader Bill Shorten and Jason Clare emphasised that Labor’s model would “repair the mess” that Prime Minister Malcolm Turnbull had made of the NBN.

At the press conference, Clare stated that Labor’s plan would see the NBN shift from Turnbull’s “fraudband” back to “super-fast broadband”, and from “copper” to fibre”.

But again, the pair did not stipulate the future of the HFC cable networks, which will cover up to a third of Australian premises.

However, Delimiter believes that the future of the HFC cable networks will also be considered as part of the Infrastructure Australia review.

It is believed that Labor’s view of the MTM technologies that the Abbott and Turnbull administrations have enforced on the NBN project is that the most urgent issue is to deal with the Fibre to the Node networks based on Telstra’s copper network.

In this sense, dealing with the long-term future of the HFC cable networks based on Telstra and Optus infrastructure is less of a priority, as they will offer stronger speeds and enhanced reliability compared to FTTN infrastructure.

However, Delimiter believes that Labor is still aware of the long-term issues associated with the HFC cable networks, and that the Infrastructure Australia review will broadly examine the future of broadband infrastructure in Australia for every premise that is not immediately slated to be served by FTTP infrastructure.

This will exclude the satellite and wireless components of the NBN network, but will focus on those served under the NBN with fixed broadband infrastructure, including FTTN and HFC cable.

HFC cable networks can be upgraded to FTTP in a similar mechanism to FTTN networks. In terms of the HFC cable, this is known as a “fibre extension” process. It is currently being investigated especially in the US by a number of US-based cable telcos, who after often competing with FTTP networks in that country.