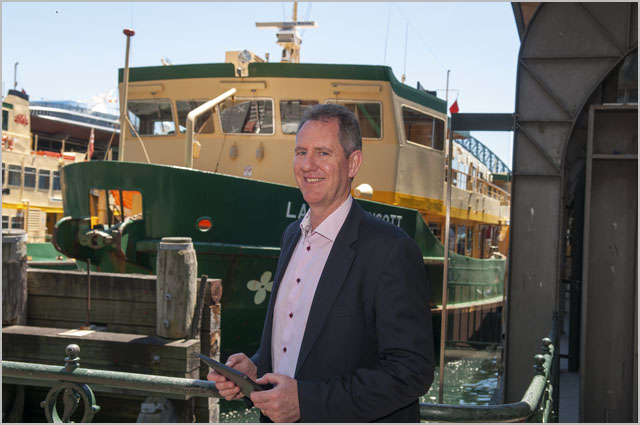 news Sydney Ferries operator Harbour City Ferries has recently undertaken a “significant” technology refresh project which has seen it deploy a slew of next-generation Microsoft products, from Windows 8 on PCs and tablets, to Windows Phone 8, Office 365 and more.

The organisation is a collaboration between two companies — Transdev and Transfield Services — and has operated the Sydney Ferries services since July 2012 as part of the State Government’s approach to handing off more government services to the private sector. The group has about 200 staff in its head office and a further 450 staff working around Sydney.

In an interview published on Microsoft Australia’s blog this week, Harbour City Ferries IT manager Adam O’Halloran said the organisation was looking to build an ICT platform that would allow its staff to effectively communicate with each other, regardless of their location or which particular computing device they were using.

“As the first step down that path we’ve already gone live with Office 365 SharePoint Online, as well as equipping employees with Windows Phone 8 powered smartphones devices,” the executive said. “The next phase, which is currently underway, is a migration to a mix of Windows 8 standard desktops, Lenovo Carbon Ultrabooks and Lenovo Helix tablet devices and includes moving our email servers from Exchange 2003 to Office 365 Exchange Online, rolling out Lync Online and an upgrade to Active Directory 2012 for easier PC fleet management.”

O’Halloran said that the company had already been finding that employees were using their own personal devices to access their work email. Harbour City Ferries consequently decided it wanted to look at ways it could enhance this situation.

“Following an extensive review, we’ve invested in a range of brand new hardware – from standard desktops and laptops to Windows Phones and Windows 8 tablets – and as we’re also using DirectAccess when employees are in the field they can stay connected to the corporate network,” he said. “While our corporate smartphones are Windows Phone 8 devices we do have a quasi-bring-your-own-device approach at Harbour City Ferries that allows employees to use their own personal devices to access their work emails. We’re definitely going to be promoting Office 365 upon the complete deployment so that employees can get work done from the device of their choosing.”

“This means when employees check their emails on the go, we can now embed links to our intranet – Compass. As such, they no longer have access to just their emails, but can also view content from our intranet, which is based on SharePoint, allowing them to better engage with our services and information, enhancing their own individual user experience and the quality of service they can deliver.”

The IT manager said the biggest benefit to staff from the Office 365 rollout was the ability to find relevant information without having to physically come into the company’s head office: “For instance, today when employees are looking for their roster they can simply connect with their smartphone or tablet device to find it.”

The company is also currently implementing systems that record operational data, such as fuel usage, engine hours for each ferry, and regulatory maintenance activities.

“Office 365 SharePoint Online is going to be facilitating this, and it will enable us to better manage and maintain our fleets and reduce operational costs.,” said O’Halloran. “Take the ability to record fuel and engine hours in real-time, for instance.  Employees can log onto SharePoint Online, and use the dashboard functionalities to upload the relevant data to obtain an immediate overview of fuel usage over a set period of time. This enables them to better manage resources which will help to reduce operational costs in the long run. What’s more, employees can use the communications channel hosted on the platform to share tips and tricks with one another to better run our fleet of ferries.”

The IT manager said employee feedback about the upgrades — largely implemented by Microsoft partner Professional Advantage — had been positive. In terms of the cost justification for the deployment, O’Halloran said the decision had actually been quite easy.

“The systems we inherited were quite dated and were no longer supported, which meant we were faced with a decision – either we buy our own servers, or we rent the infrastructure, making the most of Microsoft’s Public Cloud,” he said. “It really was a no brainer especially as we no longer have to manage our email infrastructure.”

The overall IT refresh should be finished shortly.

“Having lined up the various building blocks of the platform – including Windows 8, Office 365 and SharePoint Online – we hope to go live with the pilot by December, and then tee up a slow rollout over that period,” said O’Halloran. “As that time of year is one of our busiest periods, we’re really going to be throwing the technology in at the deep end but there’s no doubt in our mind that it’s going to be more than capable to stand up to the pressures we’ll subject it to.”

opinion/analysis
A pretty good example of how Microsoft is winning much of the corporate IT platform war at the moment because of its comprehensive portfolio. Other vendors — Google, for example, in email, or Apple, for example, in tablets — also have top-level solutions in point areas. But it’s hard to argue with a comprehensive package from Microsoft which addresses all of an organisations’ needs in this way. You see the same approach in business applications from companies like Oracle, and, to a certain extent, NetSuite. IBM used to have it too, but has dropped away a little.