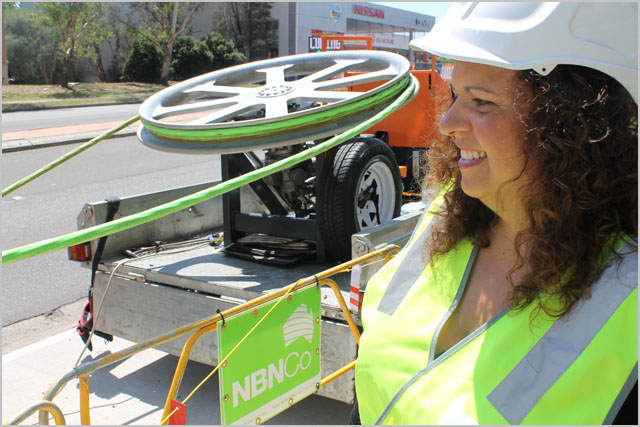 This article is by Shadow Assistant Minister for Communications and Member for Greenway Michelle Rowland. It was first published on Rowland’s blog and is re-published here with permission. the headline is Delimiter’s.

opinion Malcolm Turnbull visited Blacktown last Friday. I think the last time he was in Blacktown was to launch my Liberal opponent’s campaign in Greenway. But I digress.

Turnbull posted some silly tweets and uploaded a ridiculous video in which he starred with his new (part-time) Executive Chairman of the board of NBNCo, Dr Ziggy Switkowski. I largely ignored Turnbull’s comments until he repeated them in Parliament this morning and again in Question Time today.

Turnbull basically claimed that there was no need for a fibre-to-the-premises NBN rollout in Blacktown because: (a) Blacktown is already serviced by existing Optus and Telstra HFC infrastructure; and (b) speeds of 100Mbps are already available to end-users from services currently provided over that infrastructure.

The reality is that the end-user services provided over such cable technology are heavily user-dependent. The more users at any given time, the less speeds are available. The Optus HFC infrastructure in particular is not dimensioned for a significant number of users. In fact, the ACCC has recently stated that Optus is unlikely to make the investments to support higher speeds on its HFC network and that Optus HFC doesn’t represent a substitute for the higher speed services that Labor’s NBN would deliver. In contrast, the services provided using fibre under the NBN are not as susceptible to speed degradation as the number of users increase.

It is also incorrect for the Minister to make broad claims of 100Mbps being available under existing infrastructure. Such speeds are not available to all end-users, which is why service providers use terminology of “speeds up to”. In fact, consumer complaints and investigation and enforcement by regulators are some of the reasons why those service providers themselves don’t make the type of broad claims made by Turnbull, and have substantially moderated their advertising strategies over the years. Even the retail contracts of Optus and Telstra do not guarantee such speeds.

While the laws against misleading or deceptive conduct constrain what service providers say about the services they are actually delivering, this doesn’t appear to be an issue for the Minister.

And as I have repeatedly said since my first speech in the Parliament over 3 years ago, the NBN is not about the download. It’s all about the upload. And the upload speeds available on existing infrastructure are a fraction of those under the NBN. And what’s the upload speed on the Telstra or Optus HFC? Generally about 1-2Mbps if you are lucky!

Perversely, the Minister’s action in wiping previously scheduled NBN areas in Blacktown off the map is likely to result in consumers turning to services provided over the existing infrastructure he extolls. Our local broadband accessibility problems will be exacerbated, as more residents resign themselves to the notion that the NBN will not be delivered under the Liberals and enter into contracts for services provided over non-NBN infrastructure.

So thanks, Malcolm, for not only wiping us off the NBN map, leaving Blacktown (as noted by our local press) as “a town divided” between the have’s and have-not’s of world-leading fibre-to-the-premises infrastructure, but also for giving us a video of your excursion to Blacktown, which has been given the reception it deserves.