In a statement issued by the company this morning, its managing director of its Fixed division, Martin Mercer, said customers had told Optus they were sick of “rules, hidden fees, lock-in contracts and a lack of choice in broadband”.

Accordingly, Mercer said, Optus had launched new ‘My Home’ and ‘My Office’ bundle plans, that showed the telco had listened and would now give customers “the freedom to choose unlimited broadband bundles on a network they know and trust, with a level of flexibility, control and certainty around their spend that others don’t provide.”

“These bundles really do take the complexity out of broadband for our customers – just as the
launch of Optus My Plan did for mobile earlier this year,” Mercer added. “Optus is the only player in the market to offer this level of flexibility in broadband bundles with the option to do away with lock-in contracts and even move up and down between plans when you need to without being charged.”

Essentially, Optus has revamped both its broadband and telephony bundle structure, as well as eliminating some of the former ‘rules’ around broadband plans which have tended to annoy customers in the past.

For example, the telco is now offering customers two options with contracts — a 24 month contract, or a ‘month to month’ plan for $10 extra amonth. It has eliminated up-front connection fees and “sneaky charges” for customers’ included broadband modem, delivery of that modem, or connection fee for their new service. The telco has also eliminated fees for those moving house, as well as fees for moving up or down between its range of plans — whether customers are on a contract or not.

In terms of its plan structure, Optus has revamped its plans to offer three tiers of download quota, with a range of bolt-on options. Customers can now choose to receive 30GB, 200GB or unlimited amounts of quota each month, at price points of $70, $90 or $115 per month. These plans also come with differing telephone call inclusions — ranging from only unlimited ‘standard’ local calls for the $70 plan, to unlimited ‘standard’ local, national, Australian mobile and a range of other inclusions on the $115 plan.

The plan structure is unified across Optus’ ADSL, HFC and National Broadband Networks. When it comes to the NBN, although the telco is also offering the ‘unlimited’ data quota on its NBN, as it is on the other forms of network infrastructure, the initial $115 monthly service will be limited to speeds of 12Mbps.

To achieve the full 100Mbps speeds possible on the NBN and get unlimited downloads, customers will need to pay an extra $20 monthly fee, bringing their NBN speeds up to 100Mbps and allowing them to download as much data as they want per month.

Various additional ‘bolt-ons’ are also available from Optus, such as its FetchTV IPTV platform, as well as other speed tiers on the NBN, and telephone bolt-ons to add included calls.

Optus’ plan revamp makes the company the first ISP in Australia to offer truly unlimited NBN fibre broadband plans at the full 100Mbps speeds. Previously, companies such as TPG and Dodo have offered, or revealed plans to offer, unlimited NBN plans, but they have limited such plans by speed (usually to 12Mbps), or to only allowing 100Mbps unlimited downloads during off-peak hours late at night and early in the morning.

Despite the fact that Optus stated it was seeking to remove hidden rules from its plans, such rules do still exist. Each broadband plan the company launched today has a ‘critical information summary’ PDF associatd with it, which contains a raft of conditions as to precisely how customers may use its network.

In addition, all of the plans are also subject to Optus’ existing aceptable usage policy. Among other stipulations, this policy notes that the telco may terminate customers’ connections if they used Optus’ network in a way which affected other customers’ access to the network. This is a key issue on shared networks such as Optus’ HFC cable network, where multiple customers access broadband speeds through the same cable infrastructure. 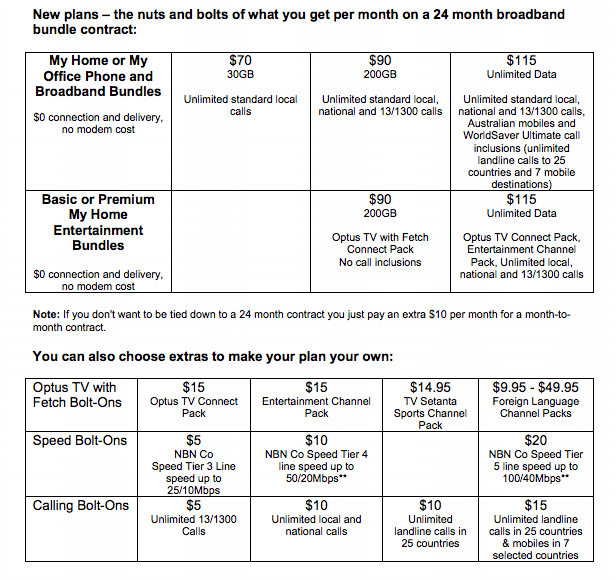 opinion/analysis
Hmm. There’s a lot going on here, and I’m not sure that all of it is good.

On the one hand, it’s good to see Optus attempting to simplify its broadband plans and make them more competitive in the Australian fixed-line telecommunications market. The telco’s growth in this area has been anaemic for some years, and while Optus has been sleeping, iiNet and TPG have been continually dining out on its lunch. There are some innovative offers in these packages — especially when it comes to the ‘unlimited’ plans and the NBN — and Optus should be commended for trying to innovate on its fixed products.

On the other hand, as is often the case, the company has shot itself in the foot with much of what it has done today. It ironically claimed that it is taking much of the complexity out of broadband plans, while leaving much of that complexity in through its ‘critical information summaries’. I had to dig through Optus’ site for a while to work out that its ‘unlimited’ NBN plans were only at 12Mbps — and even further to work out how to upgrade the speeds on such plans. You’d think Optus would realise that most NBN customers are choosing higher speeds than 12Mbps — and make those options available up-front.

Then too, Optus appears to have completely forgotten one of the main reasons why customers would switch to using its fixed broadband services at all — the fact that it has an excellent mobile network. The main advantage Optus has over rivals such as iiNet and TPG is that it operates its own mobile network and has enough backhaul infrastructure to absorb some joint bundling costs between its fixed and mobile infrastructure. What Optus should be doing is offering highly attractive mobile/fixed bundling plans.

Today’s plan release will probably help stem the tide of fixed customers migrating to rivals like iiNet. But what Optus should really be trying to do is convince its huge number of mobile customers that they should also be buying fixed broadband products from it. It should be making sure its fixed broadband plans are directly competitive with iiNet, and then offering customers significant incentives to buy both fixed and mobile products from Optus in a unified bundle. Such a strategy would also ensure customers were more ‘sticky’ than they would be otherwise — making it hard to switch away from the telco.

Optus has a small amount of offerings in this area — but nowhere near enough. The telco is largely ignoring its main competitive advantage in broadband at the moment — and that’s not a good thing for the health of the market as a whole.