opinion/analysis Amidst the ramping up of the new Australian government, and with reviews of just about everything under the sun underway, we see yet more incorrect statements from incoming federal Communications Minister, Malcolm Turnbull in regards to the rollout of the National Broadband Network (NBN).

Turnbull claimed on ABC Radio in Hobart that the rollout of the NBN in Tasmania had stopped, that “they’ve basically downed tools”:

Mr Turnbull says the federal government will honour existing contracts if the contractor is able to meet them, but says he has seen no reports of progress in Tasmania for months.

“As far as we can see no work has been done by Visionstream for at least two months and they’ve basically downed tools,” says Mr Turnbull. “The bottom line is that there is nothing I can do, not one thing I can do to stop the NBN rollout in Tasmania because it has been stopped for several months.”

The key statement here is “because it has been stopped for several months“, but it seems this claim is unsubstantiated. The report continues:

“Mr Turnbull’s claims that no work has taken place in Tasmania in the last two months regarding the rollout of the fibre optic cable was instantly challenged by listeners to ABC Local Radio by text and on Twitter, as reports came in o [sic] people seeing Visionstream workers working in Kingston, Launceston and Beaconsfield in the last week.”

The following photos – (used with permission) – from local resident James Abbott, show working continuing both last week, and even this morning in the Acton Park area: 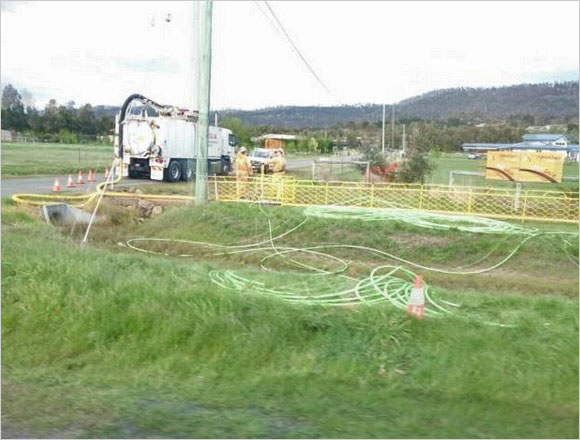 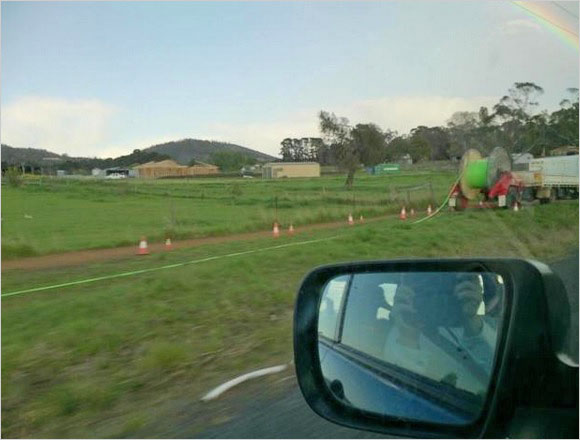 This shows – at the very least – that Turnbull is quite happy to speak out in the media about what he believes is the case, without truly confirming the veracity of his claims. It could even be just out-and-out deception. It is certainly not the first time bogus claims about the NBN have come from he and his party, and it is becoming an ongoing pattern.

“This is technically incorrect because the contractor was still at work in areas not affected by the remediation pause, and has restarted work already. This is typical Malcolm Turnbull. Rather than directly respond to the fact that he knows he misled Tasmanians he reaches for a distraction with a false claim about current roll-out.”

It is all very well – (and likely pertinent) – for the new government to conduct a review of just about everything on the books, including the NBN. They would however be better served being a little more thorough and – (more importantly) – a little more accurate in what they say.

Right? Because in this case, Turnbull is just wrong. Again.

“The spokesperson said the company was currently undertaking “construction of fibre servicing area modules (FSAM) in Launceston, a large amount of aerial cabling across the state, and is issuing tenders for new construction civil works as work packages are released by NBN.”