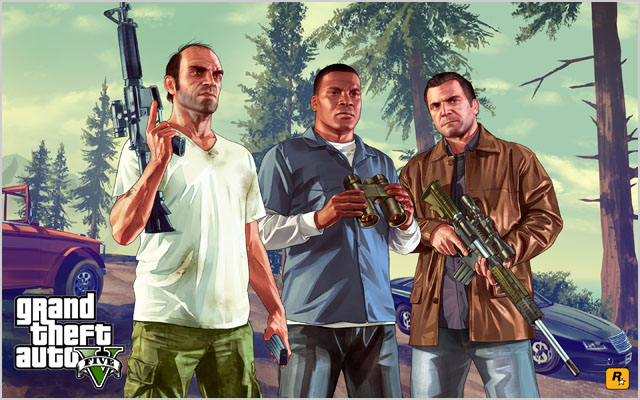 Rockstar prides itself on the scale of its open-world and this version of San Andreas is the largest in the series. Los Santos alone is huge and filled to the brim with cars and people that simulates the chaos and glamour of Los Angeles. But it isn’t until players get out of the city and into the backwoods and mountains of Blaine County that the immense size of the scale is put into perspective. Populated by sand, farms, and mountains, the northern portion of San Andreas provides a side that is less seen in previous titles in the franchise, but it’s really something to appreciate, especially when you climb to the top of Mount Chiliad and see Los Santos in the distance.

Activities such as races, parachute jumps, and odd jobs dot the landscape. The high level of customisation in terms of cars and clothes makes it return, along with new addition of custom weapons, something that was sorely missed in Grand Theft Auto IV, but it looks like it might be here to stay.

It’s in these two big areas that players see the story through the eyes of three protagonists: Michael, Franklin and Trevor, and players can easily switch between the trio whenever they please as the story moves forward. For a majority of the time I didn’t really have a preference for playing any one character, which is great since it allows the player to see the world around through three pairs of eyes instead of one.

San Andreas means something different to each man and their actions are a reflection of their vision. But sometimes, that vision might be tailored, especially during missions. There are points where the game purposely recommends a switch to another character, especially during driving sequences. It’s not exactly bad that these switches happen, but at times I found myself questioning the reasons why it chose to do so when I was content with my current character.

Regardless, the missions provided are more or less the same as past GTA titles, but there are new methods that make them interesting. Drive around and a mini-mission may occur where someone’s car is stolen, they’re being attacked or looking for a ride. Players have the option to stop and help to gain a small amount of money or drive past and ignore them. Over time, the same events might occur but they still provide some enjoyment as you cruise through the world. Owning property also includes its own missions such as delivering a truck full of booze or eliminating threats. In a way it goes along with the responsibilities of being the new owner of these establishments, but you also get small rewards in addition to the weekly profit.

The heist missions are some of the most exciting missions in the game and it’s broken down into three phases: planning, acquirement and execution. The planning phase involves choosing a method of approaching the target and picking henchmen of various skills to aid your trio. The player then acquires the necessary vehicles and other materials that are specific to the mission. After all is set and done, the heist is finally executed and the success of the mission and its dividends depends on the skills of the comrades that you selected to participate in the event. This level of depth in a heist is amazing, and it will keep players on the edge of their seats.

One thing that all missions share is replayability. After each mission, a list of secondary objectives appears that is previously unknown to the player. It’s a nice surprise since it doesn’t distract players from the main target on the initial try, but then it challenges them to complete the mission again with these secondary parameters in mind.

For the most part, the gameplay is the same. The controls should be familiar to the veteran GTA player with the exception of a few things, such as the new weapon wheel. Holding down L1 or LB opens a selection screen that allows for quick selection of the various weapons, even in the heat of combat. In addition, each weapon is neatly categorized for accessibility, finding all of your handguns in the top slot while machine guns take up another slot on the lower portion of the wheel.

It also seems that this time around, there is a lot of importance placed on wearing body armour. In the past, players can easily walk into a firefight and kill everyone, even though they are constantly being shot at. That’s not the case this time around as I found myself being easily mowed down by two or three enemies multiple times. It’s understandable that the game is trying to go for a more reasonable experience, but it seems to be less helpful and more of a nuisance.

Driving and flying seems to be the same except for the fact that a player’s skill in driving or flying is a factor in how they handle certain situations. Unlike GTA: San Andreas, these skills have been greatly reduced to only seven categories, making it easier to increase the level of a particular skill without having to worry about its effect on other skills.

Evading the police is not as easy as it used to be in past games. Getting away from their line of sight is still a walk in the park, but it’s the search phase that I find a little hard to believe. In this part, police cars are marked with a cone representing their field of vision. Fall into it and the chase begins all over again, but even though they may have lost sight of the player, they somehow know where the player is hiding which forces constant relocation before the police close in. It’s a slight issue that can easily turn a one-star alert into a larger pursuit if the player isn’t careful.

In a nutshell, Grand Theft Auto V is nothing short of pure fun. There are some minor issues, but the game’s strengths easily overshadow its tiny flaws. San Andreas is a large world to explore, and there are so many things to do and sights to see that will keep players hooked for a very long time.