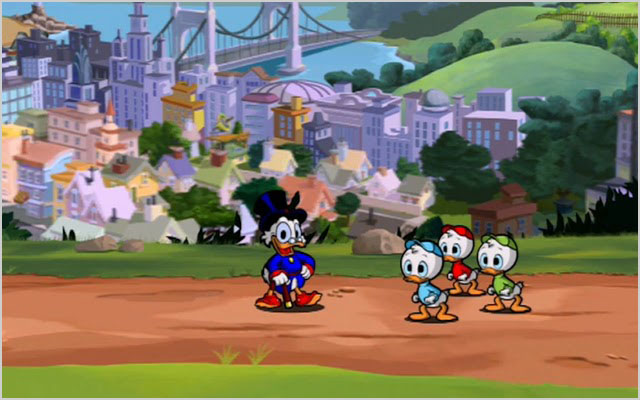 review Wayforward has an interesting track record. When the developer is working on a passion project, it is unbelievably good. When the team cares about the material they drip their hearts and souls into creating gorgeous, personality-filled animation and characters, and classic 2D level design.

The other half of Wayforward’s business model is licensed titles and while in fairness Wayforward’s licensed titles are better than the efforts of many others, the less said about these games the better. So it’s just as well that DuckTales is a game Wayforward cared about. Amongst all the platformers I’ve played in my life, it’s difficult to think of a game that has more character and personality than this one.

Now, I never played the NES original DuckTales, and from what I’ve been reading around the Internet there are some fans of that original, very highly regarded game, that were disappointed by this remake. That’s fine, but as someone going into the game with a fresh set of eyes, I can’t find anything to dislike about the game.

The most immediately obvious feature of the game is its art style. In fact, this is one of those few games that manages to still wow players at the end as it does in the beginning. The animation is unbelievably slick, just as a Miyazaki or Disney film is. Because the animation is so intricate, the characters in this game have an unparalleled sense of personality to them. The various ducks of Disney should be bright, cheerful and make player smile as they follow their adventures, and this happens in DuckTales Remastered, so Wayforward can claim mission accomplished there.

The colour palette is rich, vibrant and deep, and offer an aesthetic beauty that comes together with that animation to make this game the finest-looking 2D platforms ever made. Wayforward is well known for the visual fidelity of its games – consider Shantae through to Bloodrayne – but it’s outdone itself here. This is the team’s best work.

The game itself feels very much like a standard 2D platformer, with a dash of puzzle solving through in that breaks up the monotony without actually challenging the brain. That’s not to say the game is not challenging – it’s one of the rare occasions where I’ve landed a “Game Over” in modern games – but it’s not taxing on the mind as much as well-designed levels are a challenge to the skills. As someone who isn’t especially skilled at platformers I found myself sweating over this game, but it is fairly short in raw length and skilled platformer veterans might be disappointed by the brevity.

And while I was challenged, I wasn’t frustrated. DuckTales controls beautifully and the absence of pixel-perfect platforming means the challenge feels genuine rather than cheap.

As I’ve recently argued, brevity is preferable to padding, and DuckTales is just long enough to surprise, delight and wow without a moment of repetition or boredom. Every new boss was a joy to discover and then fight, every new environment was a wonder on the eyes. As pure fantasy and escapism, Duck Tales just works, and I can’t imagine this not cheering up anyone who has had a bad day.

I hear that the extensive plot and cut scenes are new to DuckTales Remastered, and the voices of dissent I mentioned before are especially disappointed by these for some reason. I found them very charming. As a fan of anything Donald Duck I bought the old Disney comics starting Donald and his family whenever I could as a youngster, and the plot of this game gives me a strong sense of nostalgia. The authenticity is genuine and the voice acting is superb.

It’s also worth nothing that while the Wii U version of this game doesn’t offer any special features or use of the Gamepad, it’s completely Off-TV play enabled, and if anything I loved kicking back on the lounge with headphones on and listening diving into this game. To me DuckTales Remastered was designed for the portable, personal screen experience, and the Wii U Gamepad’s the best way to experience that.

Wayforward is really thriving in this era of digital distribution. Because its games are so marketable as cheap downloadable titles it’s scoring all of the licensed titles and retro remakes that it wants. Playing DuckTales I could feel how much the developer team loved making the game. And that love is infectious.