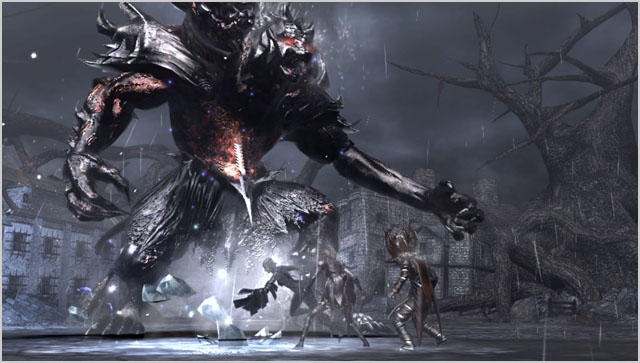 review There is an intensity to Soul Sacrifice that makes its minimalist plot and single-note theme feel more compelling than it has any right to be. I’m not sure if that intensity was a consequence of the developers being clever with a limited budget (Vita games don’t justify AAA-grade budgets, even the most important of them), but Soul Sacrifice does a lot with very little. And because of that it offers an experience that is impossible to ignore.

Describing the game in terms of titles that people have already played (or should already have played); Soul Sacrifice is a mix of Demon’s Souls’ dark atmosphere, Monster Hunter’s grand battles and a like MMO-style RPG system. Players will embark on missions that last for not more than ten minutes, and will either kill a group of small enemies, or one brutally-powerful boss. Rinse and repeat.

It would almost be repetitive if it wasn’t for that dark, oppressive atmosphere and some of the game’s extreme themes. Players have the option to either “save” or “sacrifice” defeated enemies, for instance. There’s some moral consequences in these decisions in terms of character development and cosmetic appearence, but the game goes out of its way to ensure that players are not disadvantaged regardless of whether they choose to be villainous or righteous.

That freedom to make moral choices is the game’s greatest indicator of its intensity; aside from a colour palette that isn’t a fan warm yellows; the player’s hero is not really a hero. Without giving too much away, in the tutorial alone players are set with the task of killing an ally that over a few earlier missions we’re told to grow fond of. This is a world where “sacrifice” is more than part of the game’s title; every decision a player makes whether it’s narrative or gameplay related involves sacrifice, and they’re rarely pleasant decisions to be making.

In terms of game mechanics this sacrificing also has an impact; players can make sacrifices to enact some spectacularly brutal get-out-of-jail cards. When near death players can summon a super attack that will wipe out just about everything – including many bosses. The downside to it is that it leaves the player with a crippling injury that can only be healed through an incredibly rare resource. Of course the alternative when you’re low on health another hit from an enemy can kill you, and there too players can choose to either beg their allies for aid or be a martyr. Layers upon layers of sacrifice – as I said, this game drips with some pretty heavy themes and these impact on both a narrative and mechanical level.

With this darkness Soul Sacrifice would fail if it wasn’t convincing. Thankfully it is. Music sets the mood perfectly, even if none of the tunes are especially memorable. Voice acting is reasonable, with the best of the cast being the book that acts as the player’s guide through the story. Clearly inspired by H.P Lovecraft’s Necromonicon, this book joins Grimoire Weiss of Neir fame in the club of talking books that we would just love to own.

It’s just as well that the book is so convincing because it acts as your access to the entire game. As a glorified menu, players will flip through pages to find missions to take on and adjust their character’s equipment and even appearence. I would suggest that it’s another clever smoke and mirror to hide a game whose budget was too limited to offer players more than a menu between missions, but it works and sets a nice tone.

Mechanically the game plays well with intuitive controls and the short and sharp mission structure makes it a better portable experience than, say, Ragnarok Odyssey. What impressed me the most though was the player customisation. Soul Sacrifice has a remarkably deep equipment customisation system which includes fusing the spells that you use in combat together to make new spells – the primary attack option in the game – and fusing multiples of the same spell together to create more powerful versions. But, players can only take six of these spells into battle at a time, so picking the right combination is critical to success. Because enemies can have vastly different sets of strengths and weaknesses, players will also need to either retry missions a couple of times to figure out the most effective attack strategy, or delve into the “lore” section of the book to glean for hints.

Lore is something that almost no Monster Hunter “clone” has been able to offer before, but Soul Sacrifice achieves it with precision. It doesn’t waste too many words in achieving the lore – as I said at the start, it’s a minimalist game, but just as Demon’s Souls and Dark Souls have minimalist plots with just enough juicy information to keep people investigating further so too does this title. While it is best enjoyed online and in teams of four, it’s also a game with enough narrative weight and raw length to carry it through the single player campaign, and enough challenge to keep the masochists happy.

As I said in an opinion piece after playing the demo, Soul Sacrifice really is the game that the Vita needed. Now it’s out I hope it sells as well in the west as it did in Japan, because this game really is worth buying a Vita for. Finally the console has its killer app.