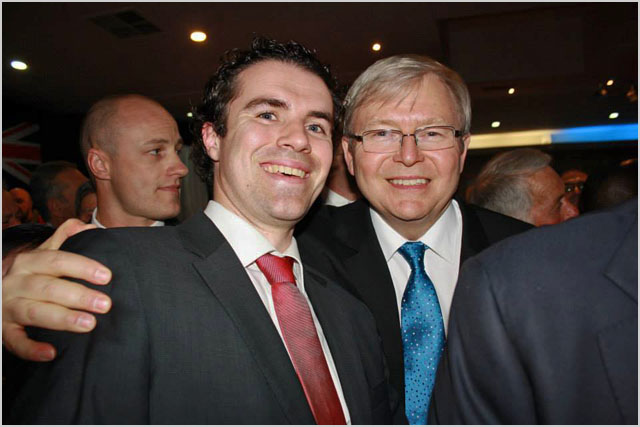 news Stephen Conroy might no longer be Communications Minister, and his party might no longer be in power, but the Victorian Labor Senator has just gained a new ally in Parliament, courtesy of the election of his former policy advisor and current Telstra regulatory affairs manager Tim Watts to Nicola Roxon’s seat of Gellibrand.

Watts has strong qualifications on paper for entering Parliament. The new MP holds a law degree from Bond University, as well as a Masters of Science in Politics and Communications from the London School of Economics and a Masters of Public Policy and Management from Monash University. He also spent several years as a solicitor at law firm Mallesons Stephen Jacques from 2003 through 2005.

Watts lists his responsibilities at the time, on his LinkedIn profile, as: “Providing advice on ICT policy, speech writing, liaison with industry, media and parliamentary colleagues, question time and parliamentary tactics, senate estimates preparation.” In addition, the new MP’s LinkedIn profile states that he played a central role in the development of the first, $4.7 billion National Broadband Network policy based on fibre to the node technology which Labor successfully took to the 2007 Federal Election.

In 2008 Watts took a role as senior advisor to the Office of the Premier of Victoria, then Labor’s John Brumby, a role he held for one year, before joining Telstra as a corporate affairs manager focused on the NBN in July 2009. Since September 2010 Watts has also been a regulatory affairs manager at Telstra. Watts’ website states that he is married, with his wife being of Hong Kong descent; the politician has two children.

According to the ABC’s live election calculator, Watts has easily won the Victorian electorate seat of Gellibrand, which former Attorney-General and Health Minister Nicola Roxon signalled in February that she would not contest in this year’s election. The ABC’s site states that Gellibrand has seen a 7.9 percent swing to the Liberal Party today, but on a two-party preferred basis the seat is still one of the safest for Labor in Australia, with Watts predicted to win it with a 66.2 percent vote on a two-party preferred basis. The Greens also have a significant presence in Gellibrand.

However, Watts’ preselection for Gellibrand has not been without controversy. When Roxon signalled that she would not re-contest the seat this year, a number of other senior Labor figures also contested the preselection, and the issue of Labor’s support for female MPs was raised. Conroy was reported to have supported Watts for the seat.

Watts’ ascension to Parliament comes as most other technology-focused MPs in the House of Representatives appear to have kept their seats at this point. Shadow Communications Minister Malcolm Turnbull has retained his seat in Sydney, as has Labor’s Parliamentary Secretary for Broadband, Ed Husic, and Regional Communications Minister Sharon Bird. Communications Minister and Deputy Prime Minister Anthony Albanese has also retained his seat of Grayndler. Conroy is not up for re-election in this election, but Minister Assisting for the Digital Economy, Kate Lundy, has also been re-elected. Attorney-General Mark Dreyfus has also been re-elected, while Shadow Attorney-General George Brandis is not up for re-election.

Senate results for Western Australia are not yet available, meaning it is not clear yet whether Greens Senator and Communications Spokesperson Scott Ludlam has retained his seat.

opinion/analysis
I’ve met Watts a number of times. I first met him when Conroy was Shadow Communications Minister, and I most recently met him again during a background briefing with Telstra, when I had to chance to tour some of the pits which Telstra is remediating in Sydney, in preparation for the rollout of the National Broadband Network infrastructure in that area.

It’s a little hard to ascertain much about Watts’ personality or plans in Parliament at this stage. However, what I will say is that Watts is not an easy nut to crack, in my opinion. He’s got a hard head (well, you’d need to, wouldn’t you, as a staffer to Stephen Conroy), he’s highly educated and he’s got a lot of experience in the trenches of Australian politics. It’ll be interesting to see how he performs as an MP. I hope that he comes out fighting for the technology sector from the get-go and helps to hold incoming Communications Minister Malcolm Turnbull to account in his unpopular reformation of the National Broadband Network. I’ll be checking his maiden speech for technology-related mentions.