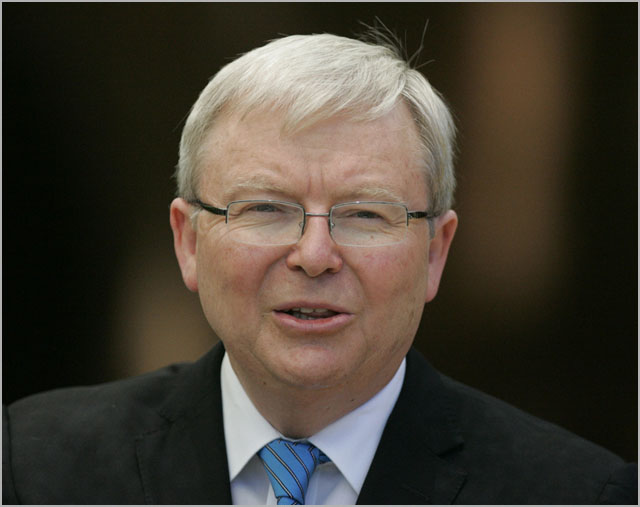 news Prime Minister Kevin Rudd today made what appeared to be an extremely inaccurate statement claiming the Federal Government was taking steps to address mobile blackspots around Australia, when in fact Labor has not taken any steps on the issue in the six years it has been in power.

Yesterday Opposition Leader Tony Abbott and Shadow Communications Minister Malcolm Turnbull held a press conference in the Blue Mountains to announce a new policy that would see a Coalition Government invest $100 million in addressing mobile phone black spots across Australia. The Coalition is hoping major mobile providers such as Telstra, Optus and Vodafone will join it in investing a further $80 million in the project.

The Labor Federal Government has largely ignored the issue of mobile blackspots in its time in power over the past six years, preferring instead to focus on developing its much more ambitious National Broadband Network policy. The NBN policy does not directly address the issue of mobile blackspots, and Labor has preferred to leave the issue to the private sector to resolve, but it will provide an ancillary benefit to mobile providers, which will be able to use the NBN’s backbone infrastructure to get competitive ‘backhaul’ access to build new mobile towers, especially in rural locations.

Prime Minister Kevin Rudd, as one of the original authors of Labor’s broadband policy, is aware of this dynamic. However, speaking in a press conference today, Rudd appeared to state that the Government was directly addressing the mobile blackspot problem.

“Prime Minister, can you talk about your plans to fix the mobile phone black spots?” a journalist asked Rudd. “Yes, I’ve seen something from Mr Abbott on this and if you look at mobile black spots around the country, his assumption is, I think, that with his $100 million uncosted and unaccounted for allocation, that that’s going to remove those problems,” said Rudd.

“Now frankly, it’s much bigger than that. What we are doing right across the nation is, region by region, locality by locality, working our way through the black spots as they arise. That’s the systematic way to do it and I believe it’s the right way to do it. We will always have further to say and do on that score.”

However, Rudd’s statement appears to be untrue. The Federal Government does not currently have a project to work through mobile blackspots as they arise, and is not working through the issue region by region, as the Prime Minister suggested. It is unclear whether Rudd was actually referring to the NBN policy, although that policy does not directly address the issue of mobile blackspots.

Rudd’s statement prompted a sarcastic YouTube video posted by Turnbull, who accused Rudd of telling blatant “lies” on the issue. “Yesterday Tony Abbott and I announced a $100 million fund to alleviate mobile phone blackspots in regional Australia. Today, Kevin Rudd announced his own, rather large blackspot, or should I say black hole, when it comes to telling the truth about telecommunications,” Turnbull said.

“No Kevin, you’re doing it again. You’re telling lies about telecommunications. last week you said the NBN was free. This week you’re saying your government has been spending money on rectifying mobile phone blackspots. Well you know, you haven’t. Not a cent over six years. Nothing. You’re not doing anything now, and you haven’t done anything over the entire, six years of Labor Government.”

The interchange between Rudd and Turnbull marks only the latest time the pair have jousted over telecommunications in the past several weeks. Last week, for example, Turnbull publicly accused Rudd of telling “shocking lies” about the National Broadband Network and the Coalition’s rival NBN policy. In a press conference in Brisbane at the time, Rudd said: “… our new approach to the future is an NBN for the future, the other lot are saying they will disconnect the NBN … the National Broadband Network, we will connect it to peoples’ homes and businesses for free”.

“In his first television advertisement, Kevin Rudd said he looked forward to a new, more considered style of politics,” Turnbull said in a doorstop interview at the time. “But now on day two of the campaign, he has told two shocking lies about the NBN. He said that connecting to Labor’s NBN is free. That is a lie: It is not free. If you want to be connected to Labor’s NBN or any NBN – whether it is completed under a Labor Government or a Coalition Government – you’re going to have to buy a plan from a telecommunications company, Telstra or Optus or iiNet or someone like that. So it’s not free. Politifact, the fact-checking website, has found that statement – which Labor has made again and again – to be false. It is a shocking lie and the Prime Minister should correct it.”

And then later in Turnbull’s doorstop: “Kevin Rudd knows what he is saying is false, so he’s lying. He’s not just getting something wrong, it’s not a howler, it’s not a blunder, it’s not a gaffe – it’s a lie. Kevin Rudd knows that broadband networks around the world typically have a range of technologies of the kind we are proposing. And if he doesn’t know that, he ought to. So what he is telling you about our policy is a lie. I don’t throw that word around lightly. But he knows what he is saying is false. He is saying it deliberately in the hope that people will believe him.”

The news comes as both sides of politics continue to make attempts to mislead the public when it comes to each other’s NBN policies, ahead of the upcoming Federal Election. Last week, for example, Communications Minister Anthony Albanese appeared to have issued a media release deliberately misleading Newcastle residents about how the Coalition’s rival NBN policy would affect the area, with the Labor MP falsely stating that the NSW city would “miss out” on upgraded broadband entirely under the Coalition’s plan.

A number of ALP election advertisements have also inaccurately claimed, for example, that Liberal policy would see Australians forced to pay up to $5,000, or else they would be left “on the old, slow copper network”, while connection to Labor’s fibre-based NBN would be free. In fact, the majority of the copper network will be replaced with fibre under the Coalition’s NBN plan, the cost of upgrading to fibre to the home is expected to be substantially less than $5,000 in most cases, and connecting to either the Coalition’s or Labor’s NBN infrastructure will see Australians charged commercial broadband rates — neither network will be “free”.

However, the Coalition has also made a number of misleading statements about Labor’s NBN project over the past several years. In one of the more blatant examples of misleading commentary, Turnbull appeared to this week make a deliberate attempt to mislead the public about the cost of connecting to the National Broadband Network’s upcoming 1Gbps fibre service, claiming on Lateline on Monday night that such connections would cost “at least $20,000” a month, despite the fact that the Shadow Communications Minister is aware the cost is likely to be much less.

Several weeks ago Opposition Leader Tony Abbott inaccurately claimed that the rollout of Labor’s National Broadband Network in Tasmania will take “80 years” to complete, in what Labor’s Regional Communications Minister Sharon Bird immediately labelled a deliberate attempt to deceive residents and businesses in the state.

opinion/analysis
It’s clear that what Rudd said was untrue — Turnbull is right. There is no Federal Government program to fix mobile blackspots that I know of. Fixed broadband, yes, but mobile reception? No. Labor has left that to Telstra, Optus and Vodafone over the past several years, who have actually done a credible job of resolving the situation. So did Rudd know what he was saying was not true? I think it’s more that Rudd was conflating the NBN, which will have an ancillary effect on mobile coverage through the provision of backhaul, with mobile blackspots themselves.

In my opinion, Rudd was bending the truth (beyond breaking point), rather than telling outright lies, as Turnbull alleged. He was trying to vaguely fit a true statement (massive government investment in network infrastructure) into the verbal paradigm that the Coalition had set up already (mobile blackspots). In the process, whether he intended it or not, the Prime Minister’s statement became an untruth. Whether this is a problem for you personally depends on to what extent you believe politicians should always tell the literal truth, at least as far as that can be determined. Let’s just say this: It’s a problem for me.