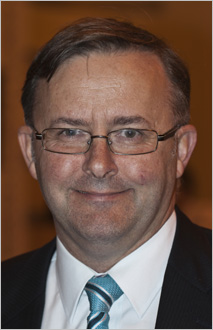 news Communications Minister Anthony Albanese appears to have issued a media release deliberately misleading Newcastle residents about how the Coalition’s rival NBN policy would affect the area, with the Labor MP falsely stating that the NSW city would “miss out” on upgraded broadband entirely under the Coalition’s plan.

Under Labor’s National Broadband Network policy, some 93 percent of Australian premises will receive fibre directly to the premise, delivering maximum download speeds of up to 1Gbps. The remainder of the population will be served by a combination of satellite and wireless broadband, delivering speeds of up to 25Mbps.

The FTTN-style rollout, although technically less capable than the FTTP style used by Labor, has been shown to be viable in a number of other first-world countries, including the UK, where incumbent telco BT recently announced it had passed some 16 million premises with FTTN since 2009, delivering speeds of up to 76Mbps, as well as France, Germany and the United States.

However, in a media release issued yesterday, Communications Minister Anthony Albanese appeared to make a deliberate attempt to deceive residents of Newcastle about the Coalition’s plan.

“Almost 75,000 homes and businesses in Newcastle and across the Hunter will miss out on superfast, affordable and reliable broadband if the Rudd Labor Government is not re-elected at next month’s Federal Election, according to new maps released today,” Albanese’s statement read. The Communications Minister also issued two maps of Newcastle (PDF) showing what the Minister said was a comparison between the two policies when it came to “fibre broadband”. The Coalition’s map has zero premises listed for construction, with the appendage that families and businesses would need to pay “as much as $5,000 for families and businesses to connect to fibre”.

“The maps graphically show the extent to which Tony Abbott and his sidekick Malcolm Turnbull would wreck Federal Labor’s National Broadband Network, denying most in the region access to the boundless educational, health, lifestyle and commercial opportunities this essential infrastructure delivers,” Albanese added.

“Right now, the NBN is rolling out fibre directly to more than 5,300 homes and businesses in and around the Newcastle area. But if there’s a change of government on 7 September that’s as far as the rollout will go. Everyone else will be left with one of two choices: battle on using last century’s copper technology or fork out as much as $5,000 to have fibre connected to their home or business – something people are currently getting for free.”

“For the region’s 10,400 businesses alone, that would be a total financial hit as high as $52 million. However, if the Rudd Labor Government is re-elected the roll out of fibre-to-the-premise will continue by mid-2016 to almost 80,000 homes and businesses in Newcastle, Maitland, Charlestown, Hamilton, Mayfield, Raymond Terrace, Tarro and New Lambton.”

Albanese said Labor’s NBN project was “an investment in our nation’s future prosperity”.

“It will transform the way we live our lives, do business, grow our regions and engage with the rest of world. That’s why access to it should not depend on how much money you have or where you happen to live or do business,” the Communications Minister said. “When it comes superfast, affordable and reliable broadband, only Federal Labor will do it once, do it right, and do it with fibre. Australians now face a clear choice: they can vote for the future and fibre under Labor or the past and copper under the Coalition.”

However, a significant portion of Albanese’s statements in the Labor MP’s media release can be shown to be untrue. For example, most telecommunications experts currently consider that both fibre to the premises and fibre to the node rollout styles deliver what can be described as “superfast” broadband. It is extremely common in the UK, for example, for politicians and commentators from all different points of view to describe BT’s FTTN rollout as “superfast”. This is the phrase used by BT itself to describe the rollout, as well as the UK Government. Likewise, the Coalition’s FTTN solution is expected to be as affordable in terms of its retail prices as Labor’s FTTP solution.

In addition, Australia’s own Telecommunications Act defines ‘superfast’ as matching the Coalition’s broadband infrastructure, due to the fact that it will offer minimum speeds of 25Mbps, and eventually, across the vast majority of Newcastle, speeds of 50Mbps or above. The Act defines a “superfast carriage service” as being a service where “the download transmission speed of the carriage service is normally more than 25 megabits per second”.

The copper component of the Coalition’s FTTN network is inherently less reliable than an all-fibre solution, but FTTN networks are widely considered to be sufficiently reliable and delivering sufficiently high speeds for “the boundless educational, health, lifestyle and commercial opportunities” which Albanese describes Labor’s FTTP NBN as delivering. High definition video links used in education and health, for example, can be delivered through either solution, and the latency offered on each is not significantly different as to affect service delivery.

Albanese’s statement regarding Newcastle residents being required to “battle on using last century’s copper technology” also does not reflect the substantial service delivery upgrades possible with FTTN. FTTN delivers dramatically faster speeds than the current ADSL broadband network over copper, and most of the copper network would be replaced under a FTTN rollout, as the majority of the copper network consists of the distance between telephones exchanges and nodes — slated to be replaced with fibre under the Coalition’s NBN vision.

The Communications Minister’s statement with regard to the “up to $5,000” cost of connecting to the Coalition’s version of the NBN refers to one additional feature of the policy will see the Coalition offer Australians the choice to upgrade their connection to fibre to the premises as under Labor’s existing NBN policy.

The Coalition believes it will be possible to offer this kind of service on a similar basis as it is offered in the UK, where wholesale telco BT Openreach is offering so-called ‘fibre on demand’ extension services at a price depending on how far premises are from their nearby node. According to OpenReach’s price list, costs for the fibre extension service include a £500 (AU$823) initial connection fee and ‘annual rental’ cost of £465 (AU$765), plus a specific charge ranging from £200 (AU$329) up to £3,500 (AU$5,762), depending on the distance premises are from local nodes.

It is likely that many Australians will wish to take advantage of this ‘FTTP on demand’ option. However, it is very unlikely, that Albanese’s claim that all 10,400 businesses in the Newcastle region would all require FTTP speeds to conduct their business, with many operating in fields which very high speed fibre broadband is not required for their work in the medium to long term.

Albanese’s statement is correct in the sense that the technical capabilities of the FTTN network which the Coalition would roll out in Newcastle following an election victory are significantly inferior than the capabilities of Labor’s FTTP infrastructure. However, the details of the Communications Minister’s statement do not accurate reflect the relative merits of the two technologies and their place in the two NBN policies.

It is believed that Albanese is aware of the key strengths and weaknesses of the Coalition’s NBN policy with regard to Labor’s own policy. Delimiter challenged a spokesperson from the Minister’s office with regard to the media release, but the spokesperson supported the veracity of Albanese’s statements in the Newcastle case.

The comments reflect only the latest occasion on which the Communications Minister has misrepresented a situation over the past several months since his appointment. In mid-July, for example, Albanese inaccurately claimed a firm hired by a law firm acting for NBN Co’s board of directors was a “public relations company”, despite the fact that the firm concerned, Bespoke Approach, is listed on the Federal Government’s register of lobbyists and employs former senior politicians for the purposes of providing political management services. Albanese was pushed on the issue by journalists and reiterated his claim.

Albanese has also previously strongly criticised the Coalition’s NBN policy as “bizarre” and “neanderthal”, despite the successful examples of the use of FTTN in several other major first-world countries having demonstrated that the rollout style delivers substantial service delivery benefits to residents and businesses.

Labor MPs in general are also engaging in misrepresentation when it comes to the Coalition’s NBN policy. A number of ALP election advertisements have inaccurately claimed, for example, that Liberal policy would see Australians forced to pay up to $5,000, or else they would be left “on the old, slow copper network”, while connection to Labor’s fibre-based NBN would be free.

In a more recent example, several weeks ago Opposition Leader Tony Abbott inaccurately claimed that the rollout of Labor’s National Broadband Network in Tasmania will take “80 years” to complete, in what Labor’s Regional Communications Minister Sharon Bird immediately labelled a deliberate attempt to deceive residents and businesses in the state.

opinion/analysis
Note: The word “lie” is very seldom used in an article on Delimiter, because it is quite hard to prove deliberate deception. However, in this case its use is clearly justified. I am aware that the office of Anthony Albanese is aware of the misleading election material distributed by some Labor MPs and of the concerns around its accuracy. In this context, and given Albanese’s extensive knowledge of both NBN policies, it is clear that his statements with regard to the Newcastle NBN rollout represent a deliberate attempt to mislead the electorate. And that is something no Australian should countenance, no matter which side of politics attempts it.