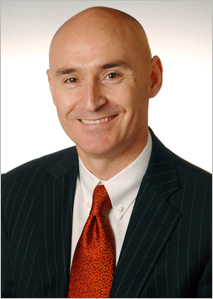 news The nation’s largest telco Telstra has announced that it will restart remediation work on its pits and pipe infrastructure, as controls on asbestos handling have been put in place to deal with the hazardous material. The remediation work is necessary for the National Broadband Network rollout to go ahead, using Telstra’s infrastructure.

It was discovered in May and June that some of the Telstra and NBN staff working on Telstra’s infrastructure had disturbed asbestos fibres, which can cause long-term health risks. Telstra subsequently stated that it was putting in place a raft of measures to deal with the situation. The telco reported last week to the asbestos taskforce set up by the Government that it was ready to start work again.

The company yesterday advised contractors that staged remediation works on its pits would recommence from 19 August with additional safeguards in place. Telstra chief operations officer Brendon Riley (pictured) said in a statement that Telstra would enhance requirements for contractors involved in remediation of Telstra pits and ensure relevant staff had completed additional training in the safe handling and removal of asbestos.

“We advised our contractors today that only companies which hold a Class B licence and can certify their staff have relevant training will start work from 19 August.  We expect the workforce to steadily ramp up as more contractors meet these stringent requirements,” Riley said.
“We have appointed and trained 125 Telstra staff for the proposed team of up to 200 specialists to supervise pit remediation.  We have updated our process and procedures increasing our level of supervision so the community has confidence this work is being completed safely.”

“We will brief local councils in the weeks prior to any NBN remediation work occurring and seek to brief residents and businesses through information packs and letters sent in the week leading up to the work.  In the case of emergency works, we intend to doorknock to attempt contact,” the executive said. “We continue to work closely with the Federal Government, Asbestos Task Force and Comcare through this process. We will also continue to consult with our employees and unions about our safety focus and training.”

Telstra said anyone concerned about work in their area would be able to contact Telstra on a dedicated 1800 067 225 hotline service.

In June, Telstra announced that it would appoint a new field workforce of up to 200 specialists to directly inspect and supervise all asbestos-related remediation work, as well as imposing mandatory Telstra-designed training for all contractors and sub-contractors working with the telco’s infrastructure.

Telstra’s main union, the Communications, Electrical and Plumbing Union (CEPU), has called for a fund to be set up to cover all workers who had been exposed to asbestos while working on Telstra’s infrastructure.