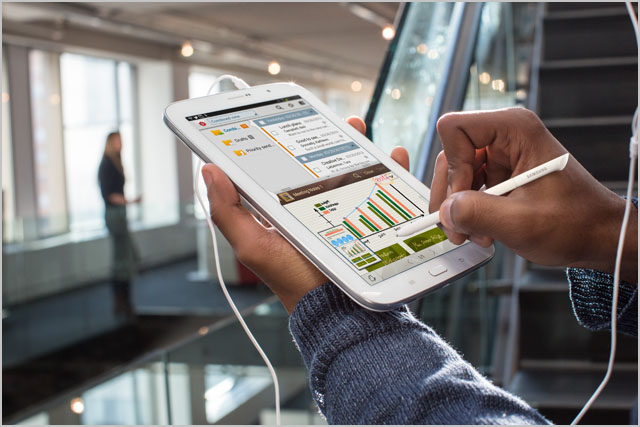 review Google’s Nexus-branded units are currently king of the hill when it comes to Android tablets, and Apple has the rest of the market sewn up with its iconic iPad. Is Samsung’s latest attempt to crack the tablet scene good enough to sit up and make us take note? Read on to find out.

Design
If you’ve played with a recent Samsung mobile device — one of the company’s Galaxy S III or S4 smartphones, for instance, or its Note II ‘phablet’ or the larger Galaxy Note 10.1 tablet — then you’ll know what we’re dealing with here in terms of the Galaxy Note 8.0. Samsung has been nothing but consistent in terms of its design language recently.

So with the Galaxy Note 8.0, you get the same grippy, shiny, plasticky case as the aforementioned models, the same light metallic rim running around the unit’s edges, and most of the unit’s ports, cameras and buttons look the same and are in the same places. This is a Samsung unit, and it looks and feels like one — either a dramatically larger version of one of the Korean manufacturer’s smartphones, or a smaller version of one of its tablets.

Whether you think this is a good thing or not depends on whether you like that design language. On Delimiter recently there’s been a great deal of debate about whether Samsung’s light plastic design looks and feels cheap, or whether it feels great. Personally I like it, but I’m aware that there are those who prefer the brushed metal approach taken by HTC and Apple. So if you fit in that second camp, you won’t like the Note 8.0.

Overall we didn’t really notice much difference in the hand between these three tablets. Each one is about the same size and weight in practice, although of course they’re made of radically different materials.

Probably the most noticeable difference with the Galaxy Note 8.0, of course, is the plastic pen which comes with it. As with the Note II and the Note 10.1, this ‘S-Pen’ slots into a nice little recessed space on the bottom right-hand side of the tablet, if you’re holding it in vertical orientation.

Overall we really liked the design of the Note 8.0. This is a light, slick 8″ tablet with excellent build quality that we found really comfortable to hold. All in all we probably preferred its design to that of the slippery squarish iPad mini or the slightly fatter Nexus 7. Samsung is onto a winner here.

Features
The Galaxy Note 8.0 comes with a solid list of features, although there are some desirable options missing, and others which have been downgraded compared to what we’re often used to in high-end smartphones, as a comparison.

To start with, this model comes with a quad-core CPU at 1.6GHz. The screen is an 8″ TFT model running at 1280×800, which delivers a resolution of 189PPI — a little better than the iPad mini at 163PPI, and a little worse than the Nexus 7 at 216PPI. You get 2GB of RAM on-board, as well as either 16GB or 32GB of storage space, and there’s a slot for a microSD card to add up to 64GB of storage space.
The main (back camera) is a little disappointing at only 5 megapixels, while the front camera is 1.3 megapixels. There’s a microUSB port for charging and synching the unit, as well a standard 3.5″ headphone jack, and you can connect up the unit to a TV via the MHL standard.

Probably the main feature which the Galaxy Note 8.0 is missing is 3G support (Samsung was supposed to be launching a model in May in Australia with 3G support, but we can’t find it online yet). In an age where Apple’s iPads support 4G speeds in Australia and carriers are launching mobile plans with shared data quota between devices, this is a substantial oversight, although we also regularly see many of our friends and colleagues simply sharing mobile broadband access from their smartphone to their tablet.

In addition, although version 4.2 of Google’s Android platform has been out for some time, the Note 8.0 only ships with version 4.1.2; a solid version, but without many of the advantages which 4.2 delivered. Android 4.2 really does make smartphones and tablets substantially better, and we’d like to see it standard on more units. We’re sure Samsung will upgrade the Note 8.0 to 4.2 shortly.

What we see in general above is a list of features that while solid, doesn’t really do much to incentivise buyers to switch to Samsung instead of picking up one of the dominant mid-size tablets — namely the already successful iPad mini or Nexus 7.

However, the Galaxy Note 8.0 does have a killer feature which those other models do not — namely, its S Pen stylus input, and the software which comes with it.

If you’re familiar with the existing Galaxy Note line, you’ll find most of the same apps and functionality here. You can use the S Pen as a glorified finger to navigate through the Note 8.0’s Android interface, and in fact we often found it faster or more precise to do so, rather than using our fatter fingers. But the far more interesting functionality is that the S Pen can also be used to scrawl notes on a variety of applications, as well as using dedicated apps such as S Note, Paper Artist and Photo Note to undertake actual note-taking or artistic work.

You also get Samsung’s Multi View functionality on the Note 8.0 — allowing you to split its screen and run multiple applications simultaneously, and you can use the Air View option to preview documents or images by hovering the S Pen slightly above the Note 8.0’s screen.

All of these are features which are not available on other tablets of this class, and they address one of the central complaints which has been levelled at tablets in the past — that they are great at presenting content to be consumed, but broadly poor at providing functionality for creating content.

Performance
There are probably three aspects of the Note 8.0’s performance which you’re interested in: Its generic performance as a mid-size media consumption tablet compared with rivals; its hardware capabilities in terms of its battery and camera, and lastly, its hero feature: The S Pen. Let me lay your mind to rest in all three areas: In all three, the Note 8.0 performs very well.

Its stellar build quality and solid design mean the Note 8.0 is at least as comfortable in the hand as any other 7″ or 8″ tablet we’ve reviewed, and given that we loved the Nexus 7, this is saying a lot. Its screen is bright and vivid, its audio quality is acceptable if not good, and overall we really liked using it. You do get the normal amount of Samsung software bloat compared with the sleek stock Android experience of the Nexus 7, but given that much of it is related to the S Pen, that’s justifiable.

Similarly, the Note 8.0 performs solidly in terms of its battery life and camera. As with the iPad mini and Nexus 7, this is the sort of tablet you can leave on standby for weeks on end and expect to come back to it with some charge. Its camera is not fantastic (what do you expect from five megapixels?), but it’s good enough for the family videos which we often find ourselves taking with our tablets. It’s probably close to on par with a last generation camera such as found on the Galaxy S or S II, but it’s definitely not up to spec compared with the latest cameras found on this year’s or last year’s top models from the likes of Apple, Samsung and HTC. But then, you probably won’t be taking a lot of photos or video with a tablet this size.

And now we come to the S Pen.

To be honest, we’ve never been a fan of stylus-based computing, and we’ve always agreed with Steve Jobs’ comment that “if you see a stylus, they blew it”. Styluses have always seemed superfluous to the tablet computing experience — or, at least, since Apple showed us how to do it right with the iPad.

Having said that, we’re aware that there is a very large proportion of the population which does strongly favour styluses (styliii?) when it comes to tablets and phablets. The ongoing success of Samsung’s Note line is proof-positive of this. And in this vein, the Note 8.0 delivers strongly.

The tablet’s guts are powerful enough to handle the stylus input easily, and it’s very precise to use. Handwriting recognition works well, and the software integration, while not quite as good as it could be, is getting better every year. It works, once you get used to Samsung’s sometimes non-Android way of doing things.

If you are fond of writing notes, making small sketches, drawing mindmaps in meetings to illustrate concepts, or just like to think with a pen in hand rather than a keyboard, then the Note 8.0 is pretty much the best device for this kind of behaviour, as well as being a stellar normal mid-sized media consumption tablet as well.

Conclusion
We really liked the Galaxy Note 8.0. Its stylus framework works very well in the 8″ form factor, and this is a powerful and well-designed little tablet which represents a strong competitor to the iPad mini, Nexus 7, and other mid-sized tablets.

Perhaps the only thing we don’t like about the Galaxy Note 8.0 is the price. It launched in Australia for $459 for the Wi-Fi version. In comparison, you can pick up a Nexus 7 straight from Google for only $249, or an iPad mini starting at $369. This means you’ll be paying a substantial premium for, essentially, the ability to use a stylus on your tablet. Unless you really want the stylus, we just don’t think this price increase is justified, and almost everyone will be better off buying a Nexus 7, or if you’re into Apple’s ecosystem, an iPad mini. We’d like to see the Galaxy Note 8.0 come down in price by about $100 and get LTE support to boot. This would make it a lot more attractive.

Other reviews of the Galaxy Note 8.0 that we liked: The Verge, PC World Australia, Engadget, AusDroid.