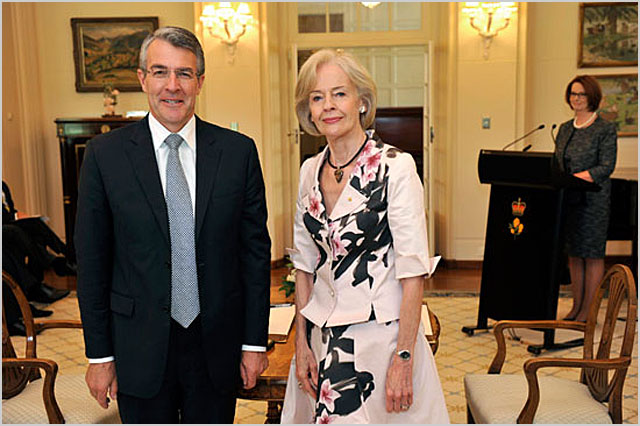 news Australia’s Federal Attorney-General Mark Dreyfus has made the extraordinary declaration that Australian law enforcement in Australia “would grind to a halt” if police officers and other law enforcement agents were forced to apply for a warrant every time they wanted to access Australians’ telecommunications data.

Last week Budget Estimates hearing sessions conducted in Canberra heard that the Australian Federal Police had made 43,362 internal requests for so-called ‘metadata’ (data pertaining to the numbers, email addresses time, length and date involved in phone calls or emails, but not the content) over the past financial year. No warrant is required for these requests.

The revelations, combined with historical data tracking law enforcement and other Federal Government agency use of metadata without warrants and the revelations over the past week that the US-based National Security Agency has gained backdoor access into the data servers of major technology companies such as Apple, Google and Microsoft, has spurred calls by Australian political groups for a ban on warrantless interception of Australian telecommunications data.

For example, the Australian Greens this week noted that it would next week introduce legislation to strengthen regulation of data collection on Australians, returning “normal warrant procedures” to law enforcement agencies accessing peoples’ private data.

“This is the first step to winding back the kind of surveillance overreach revealed by the PRISM whistleblower,” Greens communications spokesperson and Senator Scott Ludlam said in a statement. “Law enforcement agencies – not including ASIO – made 293,501 requests for telecommunications data in 2011-12, without a warrant or any judicial oversight. Under the Telecommunications Interception and Access Act, that’s entirely legal.”

“Vast amounts of private data are being accessed – including the precise location of everyone who carries a smartphone – without any recourse to the courts.  A law enforcement agency simply fills out a very basic form. My bill will return to the system where they will need a warrant.”

Similarly, the Wikileaks Party headed by Julian Assange issued a media release this week stating that if elected to the Senate, the party’s representatives would move to amend the Telecommunications (Interception and Access) Act so that all requests for access to data are subject to a warrant regime.

“In other words, security and police agencies will have to seek a warrant from a judicial officer- a full time member of the [Administrative Appeals Tribunal], a federal circuit judge or a federal court judge- before embarking on a data collection exercise,” the party said. “Further we would also seek to amend this Act so that there is a twice yearly tabling of information about the number of warrants applied for, the number of applications granted and the nature of those requests.”

However, speaking on the ABC’s 7:30 program last night, Federal Attorney-General Mark Dreyfus rejected the calls for warrants on telecommunications data to be re-introduced. “To require a warrant for every time, and it’s in the thousands, the mini thousands, of times that a law enforcement agency accesses this non contact telecommunications data would mean I think that law enforcement in Australia would grind to a halt,” Dreyfus said.

The Greens, the Wikileaks Party, the Pirate Party Australia, Electronic Frontiers Australia and many other organisations concerned with privacy and digital rights have signalled they are outraged by the NSA’s data collection activities, which may have given Australian agencies access to the data, and will be mirrored locally if the Federal Government’s plans to enact a data retention regime in Australia go ahead.

“Australians are also entitled to know if our security and police agencies are swapping or sharing data about Australians with overseas agencies.  Again ASIO in particular should be compelled by law to table yearly a report on data sharing with overseas agencies,” the Wikileaks Party said this week. “Agencies like ASIO and the Federal Police must not be allowed to be superior to the community and the Wikileaks Party core principles of transparency and accountability mean that all Australians should have the right to know what these powerful agencies are doing.”

“As the NSA PRISM revelations show us it also telcos and companies such as Google that are cooperating with security agencies in invasions of privacy of customers. The WLP believes the Telecommunications Act should be amended to compel all providers of information to security and police agencies to file an annual notice containing information about the number of requests they received for data access and how much data has been provided in the previous 12 months. This notice would include information about data handed over to foreign agencies as well as domestic agencies.”

Ludlam said the globe was currently seeing “unprecedented surveillance overreach by the United States Government, and new revelations that this information is being covertly shared with the British authorities”.

“The Australian Government now needs to disclose the extent to which it has been given access to the PRISM system to spy on Australians, and the usual bland assurances about national security will no longer wash. When I introduce the Bill, I will be asking the government to answer questions about who knew about the PRISM program, how much data is shared, and whether the Australian Privacy Principles are meaningless for citizens and Parliamentarians.”

This week Australia’s Foreign Minister Bob Carr said that he “wouldn’t think” Australians had anything to be concerned about in relation to the NSA Internet spy scandal which engulfed the United States last week, despite the fact that the issue appears to exclusively relate to NSA access to foreigners’ data on US cloud computing servers.

opinion/analysis
Frankly I do not believe either Dreyfus or Carr have any idea even what Australia’s own intelligence agencies are doing or what data they have access to from the NSA in this area, let along what the NSA itself has stored on Australians. The pair’s bland insistence that Australians have nothing to fear is easily seen through as the shallow assurances of politicians out of their depth in a field which they have little knowledge of.

What could it possibly cost Carr to have inquired, as Shadow Communications Minister Malcolm Turnbull already has, of the United States Government, what data it is keeping on Australians? What could it possibly cost Dreyfus to commit to investigating what data Australia’s law enforcement agencies have access to from the US? Nothing, in either case.

I continually find it impossible to understand why it’s only minority political groups such as the Greens, Wikileaks and the Pirate Party, which demonstrate a strong interest in protecting the privacy rights of Australians and protecting the over-reach of the growing surveillance state. One suspects that ministers like Dreyfus and Carr have long been going through a process of acclimatisation at the hands of law enforcement agencies and public servants — a process of socialisation which leads to them being unable to objectively differentiate real, government-sponsored threats to Australians’ privacy and security from normal law enforcement activities.

You want telecommunications data on someone? Get a warrant. When did that simple concept become so hard for law enforcement agencies and politicians to understand and accept? Probably, I suspect, when those same authorities realised how easy it appeared to conduct more and more policing activities from the comfort and safety of their office — and not out in the field.