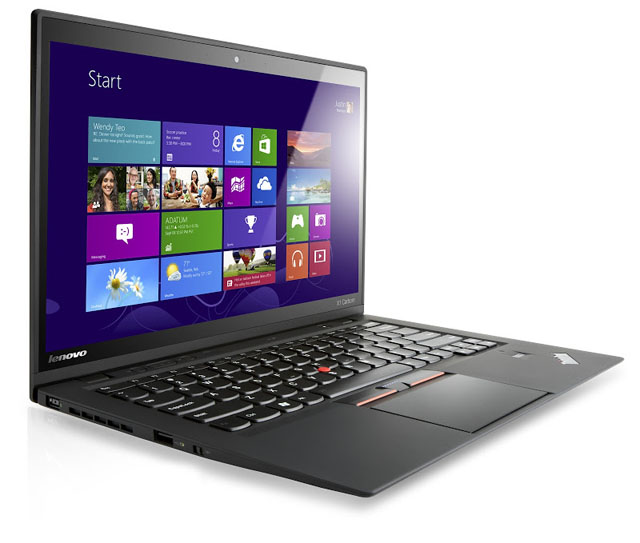 opinion Over the past several years I’ve had the somewhat unique experience of reviewing almost exactly the same laptop three times. What the process has taught me is that the new wave of touchscreens making their way into laptops aren’t just a fad; they’re part of a subtle revolution in the way we interact with out portable devices.

It’s not often, as a technology gadget reviewer, that you review the same device three times. Normally, once is more than enough to do the job; after putting any product through its paces once, you can safely assume that you’ve got its measure and that same unit won’t cross your desk again. In this context, Lenovo ThinkPad X1 laptop line has been something of an oddity in the Delimiter office over the past several years, as we’ve now tested it no less than three times.

Our initial review of the unit (by Jenneth Orantia), after it was released in mid-2011, established the X1’s credentials. At the time, the model’s stellar build quality, premium materials, ultra-slim profile and power under the hood established it as one of the top laptops on the market for those Australians looking for a business machine to run Windows in the office. The model, which Lenovo had gone to great effort to design, wasn’t perfect — with battery life an issue — but it was pretty damn good, and did much to show that Lenovo was keeping the ThinkPad’s long-term credentials as an impeccable business brand intact.

The next review we did of the X1, almost a year later on account of its new, lightweight but strong carbon fibre casing, similarly praised the model. All of the same great features and performance were still there (including a number of features which rival models just don’t offer), but the X1 Carbon also had an improved design and battery life, putting it easily amongst the top ranks of laptops for that year. Your writer’s standard laptop is one of Apple’s stellar MacBook Air units, but the X1 Carbon was good enough that it inspired a modest degree of envy.

All of this is why, when I had the chance to test the ThinkPad X1 Carbon Touch over the past several months, I was forced to question what it was that I was actually reviewing.

Delimiter’s two previous reviews of Lenovo’s X1 line were pretty conclusive, and broadly in line with the conclusions of international reviewers from major review houses such as Engadget and CNET. And the fundamental specifications and build quality of the X1 hasn’t changed much between models. If you’ve bought any of the various X1 models over the past several years, you’re getting a pretty consistent experience.

In this context, I realised what I was actually attempting to pass judgement on with any review of the X1 Carbon Touch was not the quality of the laptop in general, but rather the quality and usefulness of its touchscreen feature specifically — and beyond that, the concept of laptop touchscreens in general, especially when paired with operating systems such as Windows 8, which are specifically, if not exclusively, designed to be used with touchscreen devices.

The issue matters, because the availability of a touchscreen is rapidly becoming a differentiating factor in the laptop market.

Major manufacturers such as HP, Dell, Lenovo, Samsung and ASUS have generally hedged their bets in the area. Initially we’ve seen a wave of early touchscreen-enabled laptops which are fundamentally traditional laptops with a touchscreen slapped on but not well-integrated. A perfect example is HP’s recent Envy Touchsmart 4 Ultrabook, which has a great touchscreen on what is otherwise a very mediocre machine and very similar to a number of non-touchscreen HP units. More recently, we’ve seen better integration of touchscreen technology on more high-end laptops with much better overall build quality, such as the X1 Carbon Touch.

We’ve also seen combination units which have attempted to provide so-called ‘transforming’ units which can function as both tablets and laptops, and we’ve also seen standalone Windows 8 tablets which can be docked to function as laptops with physical keyboards. In short, when it comes to touchscreens on laptops, mainstream Windows manufacturers are trying it all — testing the market to see what sticks.

Throughout this process, there hasn’t been a real sense that end user buyers really cared, however. Consumer and enterprise demand for Windows 8 — required software if you want a laptop with a touchscreen — has remained relatively tepid, and the ongoing success of Apple, which does not offer any laptop with a touchscreen but dominates the tablet market with its iPad line — has appeared to suggest that Steve Jobs was right: Touchscreens are meant to be horizontal, not vertical. Nobody wants to get what Jobs called “gorilla arm” from holding their arm up to a screen all day.

“We’ve done tons of user testing on this,” Jobs said back in 2010, “and it turns out it doesn’t work. Touch surfaces don’t want to be vertical. It gives great demo, but after a short period of time you start to fatigue, and after an extended period of time, your arm wants to fall off.”

What my testing of the X1 Carbon Touch has told me over the past several months is that Jobs was only partially right.

In the most obvious sense, the Apple legend was correct. You cannot simply replace a keyboard and mouse/trackpad combination with a touchscreen, on a device which is used for extended periods, such as a desktop or laptop, and expect it to work. Trying to do this, my arm got very tired with the X1 Carbon Touch, even if the laptop was merely sitting on my lap and I didn’t have far to reach. Then, too, there are many aspects of even Windows 8 — such as the complexity of traditional desktop applications, even the company’s own Office suite — which just works a lot better, or even at all, when you have the precise control of a mouse/trackpad and keyboard at hand.

However, what my testing of the X1 Carbon Touch also showed me is that there are a range of scenarios for which a touchscreen on a laptop just makes a lot of sense.

Over the past several years of iPad and Android tablet ownership, I’ve become conditioned to using a range of gestures to interact with several different types of content on screens. It’s now second nature for me to pinch and zoom in to view different parts of web pages. It’s completely intuitive that I would swipe Google Maps across the screen to see geography a little to the left. It’s normal that I would touch the screen when playing a movie to bring up the controls, and then touch the pause button to pause the content.

What I found when testing the X1 Carbon Touch was that all of these gestures translated naturally to the Windows 8 touchscreen interface, and that, as ad-hoc gestures used as minority controls in the broader context of having a keyboard and trackpad available, they made complete sense. With traditional laptops, you spend 100 percent of your time interacting with the unit via they keyboard and trackpad; with the X1 Carbon Touch, I found myself using the touchscreen about 20 percent of the time — for the gestures it made sense to use it for — and the rest of the time I would use the keyboard and trackpad as per normal.

Did this enhance the experience? Absolutely. What I found was that the gestures which were the grossest in their expression — swiping left on the screen, for example, or a one-button push to pause a movie — were easiest and most logical to quickly do through touchscreen controls. For finer work, usually when I was creating rather than consuming content, it was much faster and easier to use the traditional controls.

This experience also has disturbing implications for non-touchscreen screens. Recently I’ve found myself getting frustrated with my 27″ iMac — I can’t just swipe the screen left in Google Maps to demonstrate a restaurant location to my wife. Instead of fishing for the finicky volume controls on the Apple keyboard or moving the mouse up to the far right-hand corner of the large screen, I’d kind of like to just swipe upwards on the screen itself to turn the volume up — or something similarly quick and easy.

Similarly, when I use my MacBook Air these days, I’ve found myself several times reaching out to the screen to pause a movie when I’m lying in bed watching content, only to be dumbfounded when I realise there’s no touchscreen controls available.

What has happened here is that the ubiquity of touchscreen controls introduced via smartphones and tablets over the past half-decade has changed the way we interact with other screens. It’s now built into my mind that every screen around me — from the TV to my PC to my laptop, tablet and smartphone, and even things such as elevator display screens and parking payment boxes — should all be touchscreen-enabled. I’m often confused when they’re not, and I have to peck at archaic physical buttons to get what I want.

Of course, Windows 8 isn’t the perfect interface for this new reality in any sense — while it’s a decent operating system, it’s a complete mishmash, with two radically different user interface paradigms mashed into one. But when it works — and it often does — it works really well for those who have been conditioned to use touchscreens, as I have been.

What does this say about the Lenovo X1 Carbon Touch? It says that my recommendation to others is now, when it comes to laptops, if you have a choice between similar devices at a similar price point, one with a touchscreen and one without, go for the one with the touchscreen. The ThinkPad X1 Carbon Touch is a better machine than the stock X1 Carbon, because of this additional feature (and overall, it’s still one of the best laptops on the market). You may be surprised how much you actually find yourself using it, and it’s not a 100 percent equation. Using your laptop’s touchscreen for 10 to 20 percent of your interactions — or even less — is still a valid choice, and there are enough situations where you’d want to do so to make getting a touchscreen-enabled unit worth it.

All of this, of course, poses significant questions for Apple, which is in the ironic situation of having introduced touchscreens to the masses through the iPhone and iPad, but now offering no touch functionality on its actual desktop and laptop computers. Cupertino will have watched Microsoft’s tragically flawed introduction of touch functionality into its flagship operating system through Windows 8 with great interest. Obviously, Apple faces the same eventual transition — Mac OS X will be touch-enabled, at a certain point, or, more likely, it will merge in the long-term somehow with iOS, just as laptops and tablets will, no doubt, eventually merge into some form of transformative common ground in the long-term.

I don’t think the time is right for that integration just yet; the poor adoption thus far of laptop/tablet combination machines is indication enough of that. However, what the X1 Carbon Touch shows us that that touch will indeed come to PCs and laptops inevitably. It is just a matter of when — and, more importantly, how.